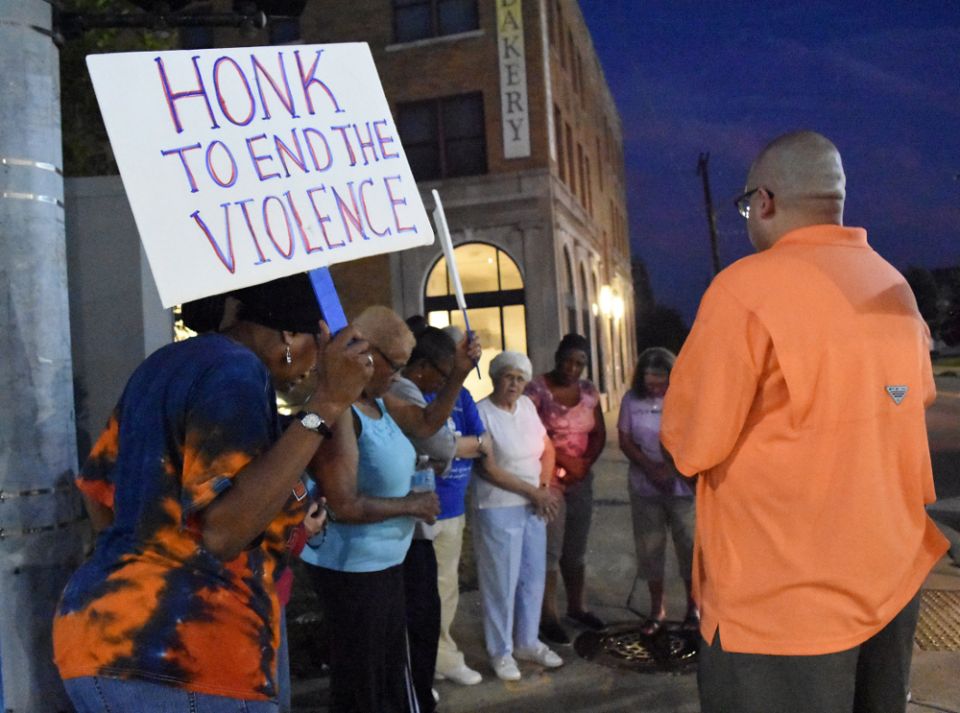 In this 2016 file photo, Catholics in Detroit participate in a "Take Back the Night" prayer vigil as part of an effort to draw attention to increasing violence in the city. On June 18, Detroit Archbishop Allen Vigneron issued a reflection on racism in the first of a series of pastoral notes he plans to release examining issues in U.S. society and culture. (CNS/Dan Meloy, The Michigan Catholic)

DETROIT — To be effective at the task of evangelizing the culture, Catholics must first reflect and repent from the sins of years of institutional racism in the Archdiocese of Detroit and beyond, Archbishop Allen Vigneron said in a new pastoral note.

The note was released one year after the publishing of his blueprint for evangelization in the Detroit Archdiocese, "Unleash the Gospel."

The pastoral note, released June 18 in English and Spanish, is titled "Agents for the New Creation" and released is the first in a series over the coming months that will examine cultural and societal topics in light of "Unleash the Gospel."

Seventy-five years after the infamous civil unrest of 1943 that took the lives of 34 people and wounded 400 others in Detroit, a catalyst for decades of racial animosity and bitterness, Catholics in the Detroit metro area have a role to play in bringing Christ into the deepest recesses of lingering division by repenting of evil and recommitting to protecting the inherent dignity of all people, the archbishop wrote.

"Our nation's history has many tremendous accomplishments of which we should be proud. But it also bears the stain of many years of institutional racism whereby blacks — even after emancipation — were treated as second-class citizens or worse. Complicit in these sins were many who professed the Catholic faith," Vigneron wrote.

"Sadly, we are living the wounds of those many years of injustice in our local communities. For the sins of these Catholics past and present, I as your Archbishop am truly sorry. Acts of racism are sins."

To become a truly missionary archdiocese, Catholics in southeast Michigan must acknowledge the past with a forthright trust in the "life-changing power of Jesus Christ" to overcome sin and move forward in love, he said.

"For us in metro Detroit, this mission-oriented attitude means that we keep Jesus Christ at the center of everything we do," Vigneron wrote. "Our role is to entrust ourselves faithfully to him and to let his teaching shape our lives and our actions."

The fact that the archbishop has repeatedly addressed the topic since even before the 2016 Detroit synod that led to "Unleash the Gospel" is a sign that the issue is of paramount importance in the still racially divided city, said Msgr. Dan Trapp, pastor of St. Augustine and St. Monica Parish on Detroit's east side and a professor at Sacred Heart Major Seminary.

"This is a problem that has to be faced. It's something we all need to be praying about and repenting — that is, thinking again — about," Trapp told The Michigan Catholic, Detroit's archdiocesan newspaper. "We're not in a post-racial society. Some people like to think we are; we're not.

"We've had four or five race riots in Detroit, depending on how people count them. This is just a long-standing difficulty, and the fact that the archbishop points it out, I think is helpful for all of us."

Leon Dixon, director of black Catholic ministries for the Archdiocese of Detroit, said the archbishop's repeated efforts to bridge racial divides have not gone unnoticed in the black Catholic community.

"So many times when dealing with matters of race, sex or anything that makes people uncomfortable, it kind of just sits there. He's keeping (this) at the top of the conversation," Dixon said. "In our world today, everything is so polarized and politicized, with people drawing lines in the sand. But the archbishop is telling us, there is no line to be drawn in the sand if you're a Catholic or a Christian because Jesus has proclaimed salvation for all."

While inner-city parishes that are predominantly black — some with churches built to house 1,000 to 1,500 parishioners — have suffered from dwindling congregations, Dixon said those who remain often feel isolated from the rest of the church.

"For years, it felt like two separate churches," Dixon said. "But we're chipping away at the ice. We're getting there."

Dixon said Detroit's much-celebrated economic revival is great for the city, but to repair the damage caused by decades of indifference and division, more outreach is needed.

"This is the third or fourth 'renaissance' in Detroit since I've been alive," he said. "I'm sure it's going to reach Eight Mile (the city/suburb border) eventually, but when you've been here 30, 40 or 50 years and change hasn't come to your neighborhood, and your neighborhood is bleeding — literally with blood in the streets — you lose hope.

"Things like (the pastoral note) go a long way in telling the community that somebody does care." 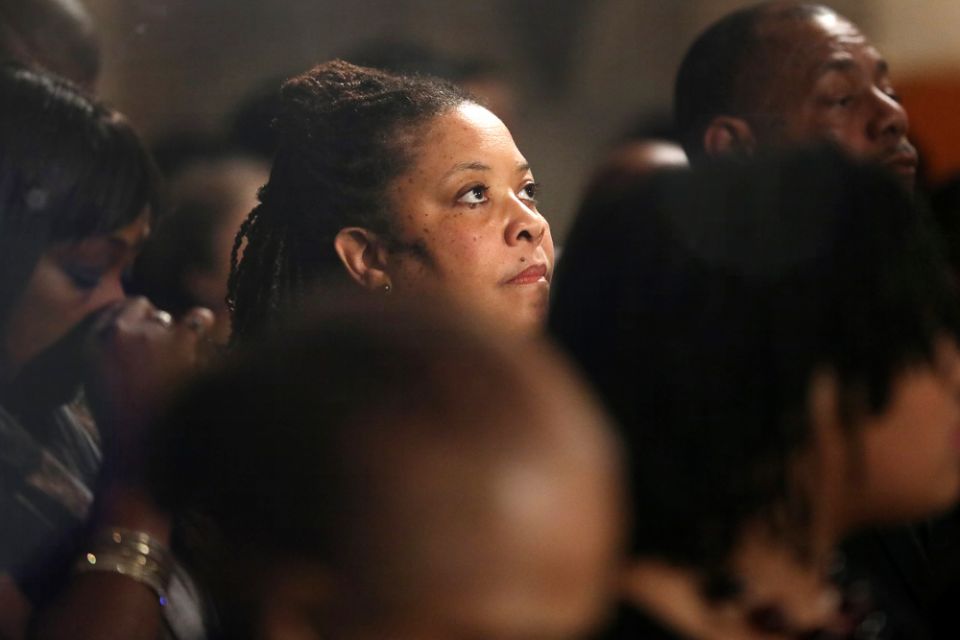 A woman prays at the Cathedral of the Most Blessed Sacrament in Detroit during during a gospel Mass for peace in January (CNS/Dan Meloy, The Michigan Catholic)

Along with the pastoral note, the archbishop also provided audio, video and text resources for parishes to engage in dialogue about the issue of racism.

Those in the African-American community in particular, Vigneron wrote, have many expressions of faith that enrich the life of the Archdiocese of Detroit, including a diversity of gifts given by the Holy Spirit.

"We would be a much poorer church without the expressions of faith through prayer, music, and personal testimony proper to the black communities. And these expressions are a leaven to the Catholic Church," Vigneron said.

Dixon pointed to January's "Gospel Mass for Peace" at the Cathedral of the Most Blessed Sacrament — commissioned by Vigneron and written by Keir Ward, a local black musician — as a concrete example of positive growth and outreach.

"I think he hit a home run with that," Dixon said. "It's one thing for us to go to meetings and say, 'The archbishop said this.' But he had the entire community there and said it in such plain language that it couldn't be refuted."

Stechschulte is managing editor of The Michigan Catholic, newspaper of the Archdiocese of Detroit.

Justice | Reflection, repentance from sin of racism seen as key to evangelization

'Witnessing Whiteness': How do we witness?

Buffalo makes it clear: Racism and gun violence are a Christian problem