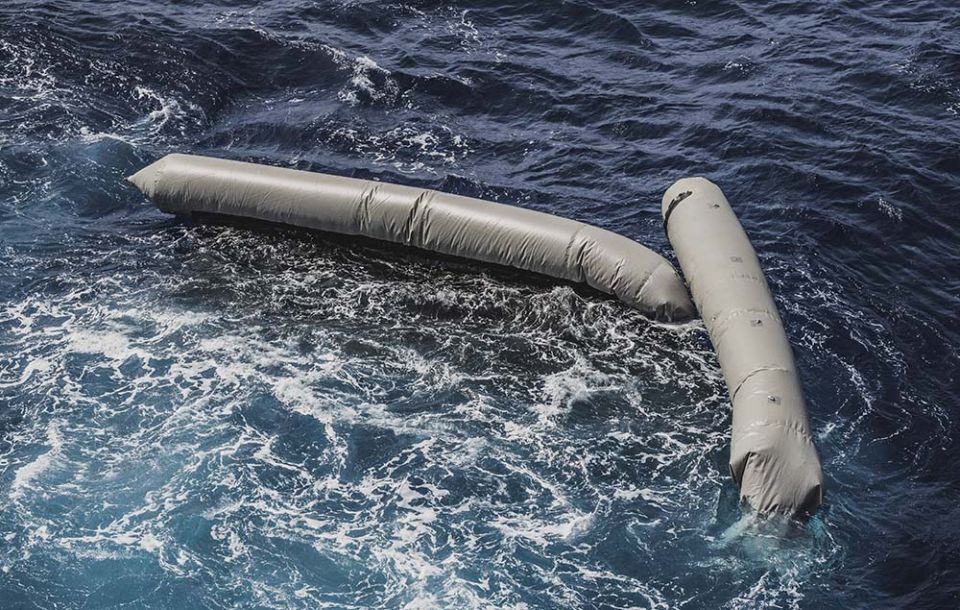 Debris from a dinghy that was supposedly carrying an estimated 130 migrants floats in the Mediterranean Sea northeast of the Libyan capital, Tripoli, April 22. (SOS Mediterranée via AP/Flavio Gasperini)

Rome — Rescue groups and the Vatican are decrying the latest deaths of migrants who put to sea in traffickers' unseaworthy boats, amid laments that central Mediterranean nations are choosing not to dispatch vessels to save them.

Aid group Alarm Phone said in a tweet that despite a spotter plane locating an overcrowded ship in the sea north of Libya on April 21 and pleas for help from the occupants, "only non-state actors actively searched for the boat in distress at sea."

By the time a charity rescue ship reached the site on the evening of April 22, the boat had capsized and all the estimated 130 occupants are believed to have drowned.

"Abandoned and buried at sea" read the headline across a photo of the sea on the front page of L'Osservatore Romano, the Vatican newspaper, on Saturday, April 24.

On Sunday, Pope Francis somberly built on the newspaper's denunciation of what he called a "moment of shame."

"Let us pray ... for those who can help but who prefer to look the other way. Let's pray for them in silence," he told the public in St. Peter's Square.

The existence of the dangerously overcrowded boat was first signaled in a call to the aid group Alarm Phone on Wednesday, April 21.

Alarm Phone said it was in contact with the dinghy over a period of 10 hours on Wednesday. It said it "repeatedly relayed its GPS position and the dire situation on board to European and Libyan authorities and the wider public."

The European Union border protection agency Frontex told the AP in an interview that it had alerted Italian, Maltese and Libyan authorities after one of its patrol planes spotted the dinghy.

"Despite Frontex spotting the distressed boat from the sky, only non-state actors actively searched for the boat in distress at sea," Alarm Phone said in a tweeted statement.

Ocean Viking, a rescue ship operated by the charity group SOS Mediterranée, together with MY ROSE, one of three merchant vessels which complied with requests from Italy and Libya to lend assistance, reached the site on Thursday, April 22, and found several bodies, one of them hunched over a life preserver, but no survivors.

"Unfortunately, the deadly weather that occurred over the last few days in that area made it almost impossible to do any type of rescue mission," he said in a Zoom interview on Saturday from Warsaw, Poland, where the EU agency is based.

According to Ocean Viking's log, a Libyan coast guard vessel, Ubari, was supposedly headed to the dinghy's aid.

When the Ocean Viking arrived and found the bodies, it noted in its log that "there is no sign of patrol vessel Ubari in the vicinity nor contact established with the Ocean Viking."

The Libyan coast guard has said bad weather, combined with the need to rescue other migrants off the Libyan coast, prevented involvement in the efforts to help the dinghy. Ubari, supplied by Italy to Libya's coast guard in 2018, had rescued 104 migrants and recovered two bodies from a traffickers' boat off the country's coast on Thursday, according to Italian news reports.

The traffickers were particularly reckless to launch the doomed dinghy in such conditions, Frontex's Borowski said. "There were massive waves, two to three meters [6.6 to 10 feet] high. It was almost guaranteed that a rubber dinghy would overturn and people all end up in the sea."

Italy trained and equipped the Libyan coast guard but has come under fire from aid groups, which say the fleet in the violence-wracked North African nation is not up to the task. Additionally, when the Libyan coast guard does rescue migrants from flimsy dinghies or fishing boats, they are brought back to inhumane conditions in detention centers, U.N. refugee agencies and human rights groups have lamented.

Italian Premier Mario Draghi sparked criticism when, during a recent visit to Libya, he praised the work of the Libyan coast guard.

Both Italy and Malta have contended that charity ships in effect help ensure that the migrants, who pay the Libyan-based smugglers, safely reach European shores. Both nations also insist — mainly in vain — that fellow European Union countries should take in far more rescued migrants, many of whom ultimately hope to find relatives and jobs in northern Europe.

An email request to a spokesperson for Malta's Home Affairs ministry on Saturday wasn't immediately answered.

On Saturday, another boat was reported to be in distress, with 42 migrants aboard, but it couldn't be located, SOS Mediterranée's Italy director general, Valeria Taurino, told Italian Rai state TV. Lamenting the loss of lives, Taurino said the charity calls on Europe "to take up its responsibilities" and not to block NGO rescue boats from operating.

Italy has repeatedly kept charity rescue ships in port for weeks for administrative inspections after the vessels brought rescued migrants to Italian shores.

On Sunday, the Italian coast guard said that with a help of a container ship in the waters off Italy, it aided an overcrowded motorized fishing boat struggling in towering waves and stiff winds.

The vessel, with at least 100 passengers aboard, including children, had people crowded on the bridge and below deck when it was spotted on Saturday, a coast guard statement said. After the boat's motor quit working, it was towed to the Italian mainland, where it arrived in port on Sunday. The exact number and nationalities of those rescued, who are presumably migrants, weren't immediately available.

[Renata Brito in Barcelona, Spain, contributed to this report.]

They come at night: Syrians flee to Iraq as cease-fire set to expire

Q & A with Sr. Donna Markham on what the good Samaritan means to Catholic Charities USA