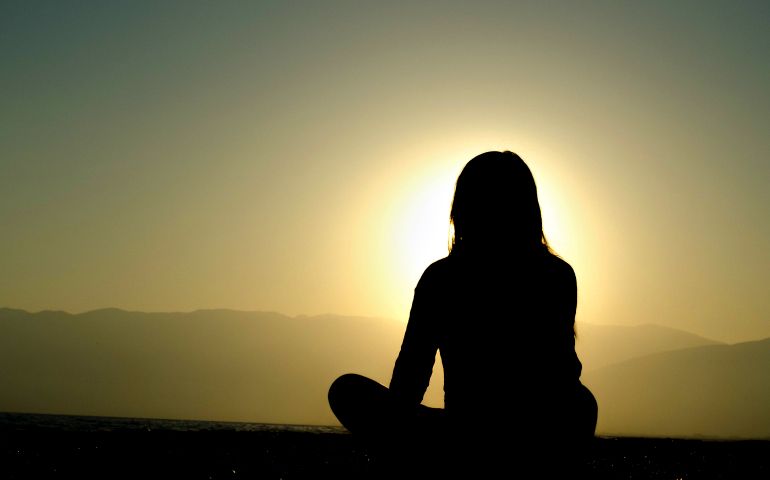 One by one, I've watched a number of friends and acquaintances announce their plans to decrease or end their social media consumption because the negative news since the presidential election was affecting their mental — and even spiritual — health.

I respect and admire such self-awareness and self-care. But I also worry that "checking out," while tempting, is not the answer when so much is at stake politically, socially and morally.

As I considered my own need to nurture my spirit — in part to have the energy to fight for the causes I believe in — I realized that this tension between inner and outer focus is one the church has struggled with for centuries. The history of monasticism speaks to the need to withdraw from the world to focus completely on one's spiritual life, while Catholic social teaching makes clear we must work for justice, especially for the most vulnerable.

It's up to each Christian to decide which call — to action or to contemplation — prevails. Sometimes a person's disposition makes him or her more inclined toward one. Or the circumstances of one's life, or of the culture, demand more of the other. Even discerning this decision can seem overwhelming and confusing.

But setting these Christian virtues up in such a dualistic fashion is a mistake, I believe. The answer is not to choose one over the other, but rather to try to incorporate both into your life.

That, too, is part of our tradition. Inspired by Jesus' example of both working miracles among the people and withdrawing to the mountain for prayer, St. Isidore of Seville taught about the need for both action and contemplation at a time when the church believed the latter was better.

"Therefore let the servant of God, imitating Christ, dedicate himself to contemplation without denying himself active life," Isidore wrote. "Behaving otherwise would not be right. Indeed, just as we must love God in contemplation, so we must love our neighbor with action. It is therefore impossible to live without the presence of both the one and the other form of life, nor can we live without experiencing both the one and the other" (as quoted by Pope Benedict XVI at a 2008 general audience).

Fourteen centuries later, another Catholic priest, Franciscan Fr. Richard Rohr, expressed a similar sentiment in founding the Center for Action and Contemplation in Albuquerque, N.M., believing that the two must be brought together. "The name was chosen because it expressed the paradoxical nature of the center's purpose: standing in a middle place, at the center of the cross, where opposites are held together," according to the center's website.

Since the inauguration last month, hundreds of thousands of social justice activists, including many Catholics, have sprung into action, through marches, postcard-writing campaigns, phone calls to elected officials or organizing with like-minded folks. The energy devoted to fighting for the rights of immigrants, refugees, public schoolchildren, women, LGBT people and others has been staggering.

Yet, action takes a toll. The accompanying anger, even righteous anger, can be exhausting. Setbacks bring disappointment, even despair. To counteract this, I've found the following "contemplative" tips helpful:

1. Don't forget your prayer life, including praying for those with whom you disagree. Obviously, daily time with God is important for everyone, but especially for activists working to make a difference in the world. Try praying not only for your causes but for those who oppose them.

2. Nurture your body as well as your soul. Now is not the time to skip your yoga class, run or, for me, a weekly swim. A life of action means a full calendar, but make time to keep your body healthy. Endorphins from exercise will help you think more clearly and be more effective, too.

3. Trade some of your news consumption for storytelling. As an avid nonfiction reader, I made a New Year's resolution to read more novels. Stories — whether in books, movies or a good TV series — provide a bit of a distraction while also sparking insights into others' lives.

4. Get your news the old-fashioned way. Social media-generated news feeds are created by algorithms that only reinforce what you already think, read and know. They're also more likely to contain "fake news" sites. Subscribe to a reputable in-print publication (like NCR!) for a broader source of news.

5. Spend time with people IRL (in real life). I applaud the use of social media to connect with a range of people, but there's something to be said for actually sitting across the table from a friend. Take time to kindle in-person relationships, too.

So take that Facebook break if you need it, but don't go to the other extreme and escape to a life of all self-care and no care for the urgent issues demanding our attention. Those working for justice in the "resistance" now have rightfully turned their attention to issues of strategy and effectiveness. As they church has discovered, so will they: Action + contemplation is a winning equation.