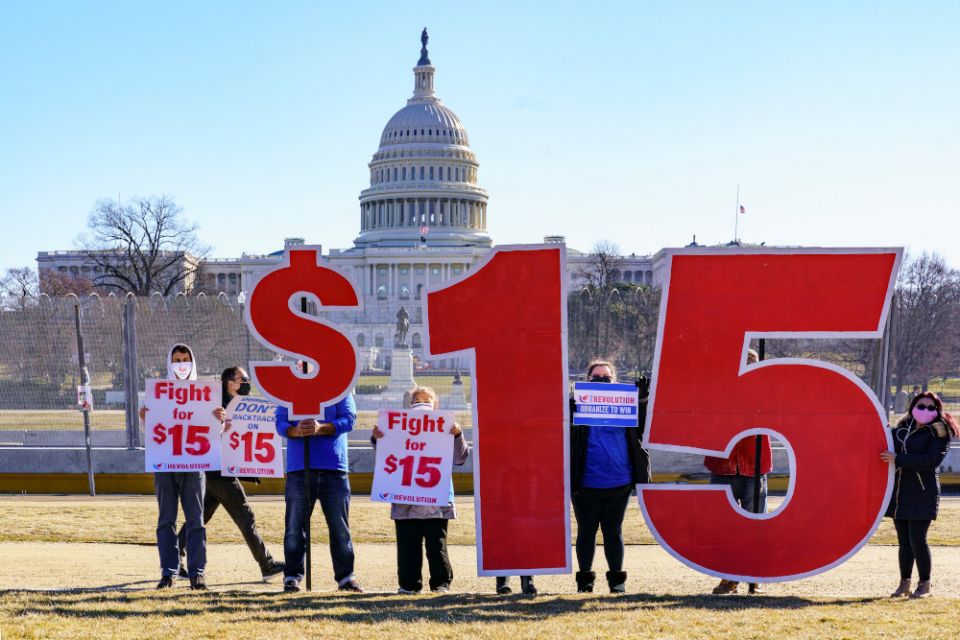 Activists appeal for a $15 minimum wage near the Capitol in Washington, Thursday, Feb. 25, 2021. The $1.9 trillion COVID-19 relief bill being prepped in Congress includes a provision that over five years would hike the federal minimum wage to $15 an hour. (AP Photo/J. Scott Applewhite)

For more than a century, Catholic social teaching has advocated not for a minimum wage but for a living wage for workers. Sadly, however, the U.S. Congress cannot even increase the minimum wage because of parliamentary rules and Republican opposition.

A living wage, according to Pope Leo XIII in his 1891 encyclical Rerum Novarum, would be enough to provide for a family’s basic living expenses (food, housing and other needs). In other words, it should keep a family out of poverty.

The U.S. bishops proposed a universal living wage in their 1919 Program for Reconstruction, years before a minimum wage became part of the New Deal.

I challenge anyone who opposes increasing the minimum wage — including members of Congress — to try to live off those amounts for Lent. What for most would be an unbearable penance is daily life for 1.6 million workers who earned at or below the federal minimum wage in 2019.

The Biden administration wants to raise the minimum wage to $15 an hour, which opponents say would hurt small businesses during the COVID-19 recession. But a careful reading of the House passed bill shows that the increase would would not reach $15 an hour until four years after the bill is passed, by which time the pandemic recession will be a distant memory.

If Congress is truly concerned about small businesses, it could adopt Sen. Mitt Romney’s proposal and give employers with fewer than 20 employees an extra two years to comply with the law.

For many years, economists argued that if wages were increased, it would mean fewer jobs. This followed the classical economic view that when prices go up, consumption of any item, including labor, goes down. More recent economic studies have found these fears were overblown. True, some jobs might disappear, but higher salaries also have a ripple effect as this money is spent in workers' neighborhoods.

The Congressional Budget Office predicts that increasing the minimum wage to $15 an hour will improve the lives of 27.3 million low-wage workers, including 1.3 million who will be lifted out of poverty. On the downside, it believes that 1.3 million workers will lose their jobs. Other economists believe these numbers are overly pessimistic.

State and city increases in the minimum wage have not led to the dire consequences predicted by their opponents. We must also ask, are these low-paying jobs worth saving?

Attempts to increase the minimum wage failed when the parliamentarian ruled that the increase would not qualify as a budgetary item under Senate rules and therefore could not be included in the Biden $1.9 trillion stimulus package. Including it in the stimulus bill would have allowed passage by a majority vote. Any attempt to enact it separately will meet Republican opposition that will be able to kill the increase with a filibuster.

More states, like Florida, have joined in raising their minimum wages, but we need a Federal standard so that those regions that try to help workers are not penalized for being just.

The Biden plan is not radical; it is very conservative. Forcing someone to work at poverty wages is simply another form of slavery. People, including single parents, should be able to support their families with their wages. It is past time to move the minimum wage toward a living wage.

Raising the minimum wage an economic and moral necessity