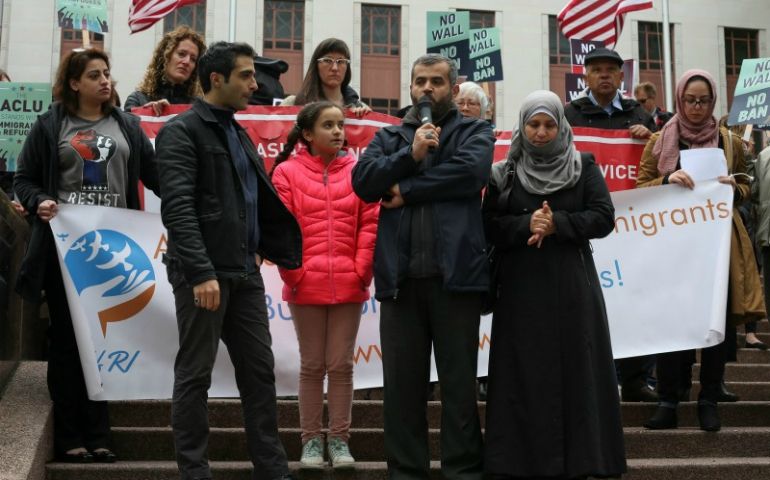 Mustafa Al-Mustafa, center right, a refugee from Syria, speaks with the help of a translator, Moh Kilani, left, while joined by his wife, Jamila Al-Mustafa, right, and daughter, Yamama, 11, center left, during a protest against President Trump's travel ban outside of the U.S. Court of Appeals on May 15, 2017, in Seattle, Washington. (Reuters/David Ryder)

Seattle — U.S. appeals court judges on Monday questioned the lawyer defending President Donald Trump's temporary travel ban about whether it discriminates against Muslims and pressed challengers to explain why the court should not defer to Trump's presidential powers to set the policy.

The three-judge 9th U.S. Circuit Court of Appeals panel was the second court in a week to review Trump's directive banning people entering the United States from six Muslim-majority countries.

Opponents - including the state of Hawaii and civil rights groups - say that both Trump's first ban and later revised ban discriminate against Muslims. The government argues that the text of the order does not mention any specific religion and is needed to protect the country against attacks.

In addressing the Justice Department at the hearing in Seattle, 9th Circuit Judge Richard Paez pointed out that many of Trump's statements about Muslims came "during the midst of a highly contentious (election) campaign." He asked if that should be taken into account when deciding how much weight they should be given in reviewing the travel ban's constitutionality.

Neal Katyal, an attorney for Hawaii which is opposing the ban, said the evidence goes beyond Trump's campaign statements.

"The government has not engaged in mass, dragnet exclusions in the past 50 years," Katyal said. "This is something new and unusual in which you're saying this whole class of people, some of whom are dangerous, we can ban them all."

Outside the Seattle courtroom a group of protesters gathered carrying signs with slogans including, "The ban is still racist" and "No ban, no wall."

Paez asked if an executive order detaining Japanese-Americans during the World War Two would pass muster under the government's current logic.

Acting U.S. Solicitor General Jeffrey Wall, arguing on behalf of the Trump administration, said that the order from the 1940s, which is now viewed as a low point in U.S. civil rights history, would not be constitutional.

If Trump's executive order was the same as the one involving Japanese-Americans, Wall said: "I wouldn't be standing here, and the U.S. would not be defending it."

Judge Michael Daly Hawkins asked challengers to Trump's ban about the wide latitude held by U.S. presidents to decide who can enter the country.

"Why shouldn't we be deferential to what the president says?" Hawkins said.

"That is the million dollar question," said Katyal. A reasonable person would see Trump's statements as evidence of discriminatory intent, Katyal said.

In Washington, White House spokesman Sean Spicer said at a news briefing that the executive order is "fully lawful and will be upheld. We believe that."

The panel, made up entirely of judges appointed by Democratic former President Bill Clinton, reviewed a Hawaii judge's ruling that blocked parts of the Republican president's revised travel order.

LIKELY TO GO TO SUPREME COURT

The March order was Trump's second effort to craft travel restrictions. The first, issued on Jan. 27, led to chaos and protests at airports before it was blocked by courts. The second order was intended to overcome the legal problems posed by the original ban, but it was also suspended by judges before it could take effect on March 16.

U.S. District Judge Derrick Watson in Hawaii blocked 90-day entry restrictions on people from Libya, Iran, Somalia, Sudan, Syria and Yemen, as well as part of the order that suspended entry of refugee applicants for 120 days.

As part of that ruling, Watson cited Trump's campaign statements on Muslims as evidence that his executive order was discriminatory. The 9th Circuit previously blocked Trump's first executive order.

Last week the 4th U.S. Circuit Court of Appeals in Virginia reviewed a Maryland judge's ruling that blocked the 90-day entry restrictions. That court is largely made up of Democrats, and the judges' questioning appeared to break along partisan lines. A ruling has not yet been released.

Trump's attempt to limit travel was one of his first major acts in office. The fate of the ban is one indication of whether the Republican can carry out his promises to be tough on immigration and national security.

The U.S. Supreme Court is likely to be the ultimate decider, but the high court is not expected to take up the issue for several months.