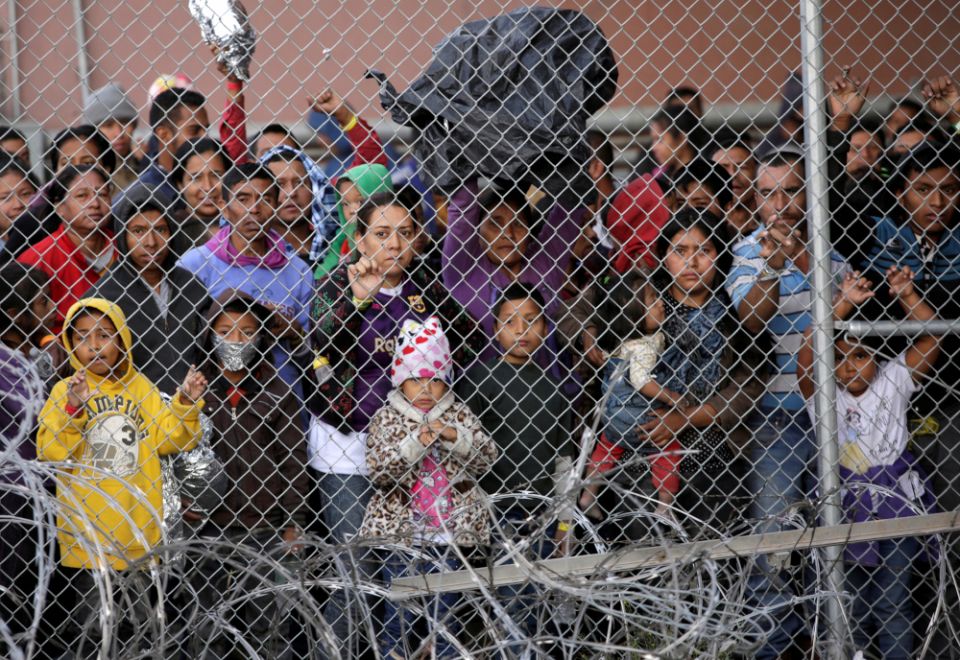 Central American migrants are seen inside an enclosure in El Paso, Texas, March 27, 2019. They were being held by U.S. Customs and Border Protection officers after crossing the U.S.-Mexico border and turning themselves in to request asylum. Under Trump administration policy, the migrants must be returned to Mexico and apply for U.S. asylum from there. Migrants who arrive in Arizona must be bused to El Paso and also taken to Mexico, a policy Bishop Edward Weisenburger of Tucson, Ariz., decried Dec. 2 for not protecting "vulnerable people" and for placing them "in significant danger." (CNS/Reuters/Jose Luis Gonzalez)

Tucson, Ariz. — Catholic leaders decried an expansion of the Trump administration's "Remain in Mexico" policy, which includes relocating migrants currently biding their time in the Tucson area back to border towns in Texas for transport back into Mexico.

The current policy "does not provide protection to these most vulnerable people and in fact has placed them in significant danger in cities that cannot adequately assist them," wrote Tucson Bishop Edward Weisenburger in a statement released Dec. 2.

The Trump administration just expanded its Migrant Protection Protocols policy, also called "Remain in Mexico," to migrants who cross over the border into Arizona. The expansion means these migrants are transported from Tucson to El Paso, Texas, and then into Mexico border cities.

The Trump policy, initially announced in January 2019, requires those seeking asylum in the United States to remain in Mexico while their applications are processed. Immigration lawyers are challenging the policy in court. In late July, the U.S. Supreme Court said the policy could remain in effect while challenges to it work their way through the lower courts.

A day after Weisenburger issued his statement the Tucson City Council unanimously a memorial calling on federal officials to "suspend the implementation" of Migrant Protection Protocols.

Although U.S. Customs and Border Patrol successfully implemented the policy along most of the southern U.S. border, Arizona was seen as weak on enforcement, with a spike of asylum applications at a time when other ports of entry showed a decline.

On Nov. 22, Customs and Border Patrol officers began taking busloads of asylum-seekers who had already filed their applications from Tucson to El Paso to be subsequently transported to Ciudad Juarez in Mexico.

In his statement, Weisenburger argued that the conditions in Ciudad Juarez and other border cities were "inhumane," especially for vulnerable populations like children, families and pregnant women.

"The conditions in these cities include inadequate sanitary facilities where 2,500 people have access to only three portable toilets, pregnant women being given one bottle of water per day (and) families and children living in makeshift tents on sidewalks," the bishop said.

"In addition to the inhumane conditions in which the people must remain," he said, "they are subject to extortion and kidnapping by cartels and gangs – 364 rapes and assaults have been reported in one city – and daily threats of violence when the family has no money to pay the extortion."

Instead, the government should allow local groups, including Catholic Community Services, which runs the Casa Alitas shelter, to assist the asylum-seekers, he added.

"In this most recent year, we assisted 20,000 people, primarily families with children, while they journeyed to meet their sponsors and participate in the legal process to be granted asylum," he explained. "All people assisted at Casa Alitas are provided medical screening, clothing, food, assistance with transportation, a clean bed and a safe place to recover from the trauma of an arduous journey."

He added, "Few if any of these resources are available in Juarez. Instead of care, concern and dignity these same families are being pushed into the street facing danger and the uncertainty if and when they will be given to opportunity to present their case to an immigration official."

As for Border Patrol assurances that vulnerable groups will not be touched, "there is reason to believe this policy has not been adequately implemented and that many of these most vulnerable people are living in the streets in the city of Juarez where (Tucson asylum-seekers) will be taken," Weisenburger stated.

Several days earlier, the Kino Border Initiative issued a similar statement condemning the expansion. Run by Jesuit Father Sean Carroll. The initiative has facilities in Nogales, Arizona, and Nogales in the Mexican state of Sonora.

"CBP is intentionally transferring people away from places where services exist and placing thousands of asylum-seekers in harm's way, exposing them to suffering and danger, and blocking them from seeking safety," it said.

"This expansion of 'Remain in Mexico' is another of the Trump administration's many systematic attempts to block an individual's right to seek asylum. The violations against asylum must be ended decisively and immediately," it said.

The organization's statement noted that because of partnerships with local groups, asylum-seekers in Arizona are much more likely to have legal assistance during their adjudication hearings, a factor that exponentially increases their chance of success.

"In contrast, only 1% of people subject to Remain in Mexico have access to an attorney," it said. "We are ready and willing to continue to offer hospitality and assistance to migrants and asylum-seekers. Arizona communities have been doing this work for years, and we have the capacity and desire to do so going forward."

In the meantime, news stories continue to document the hardships asylum-seekers face as they cross the Sonoran Desert into southern Arizona.

In late November, The Washington Post reported that Tucson's border crossings exceeded those at El Paso. It said more than 200 asylum-seekers entered at the remote area of Sasabe, including a group of 129 during a five-hour window one night. The oldest was 56 and the youngest was only 6 months old.