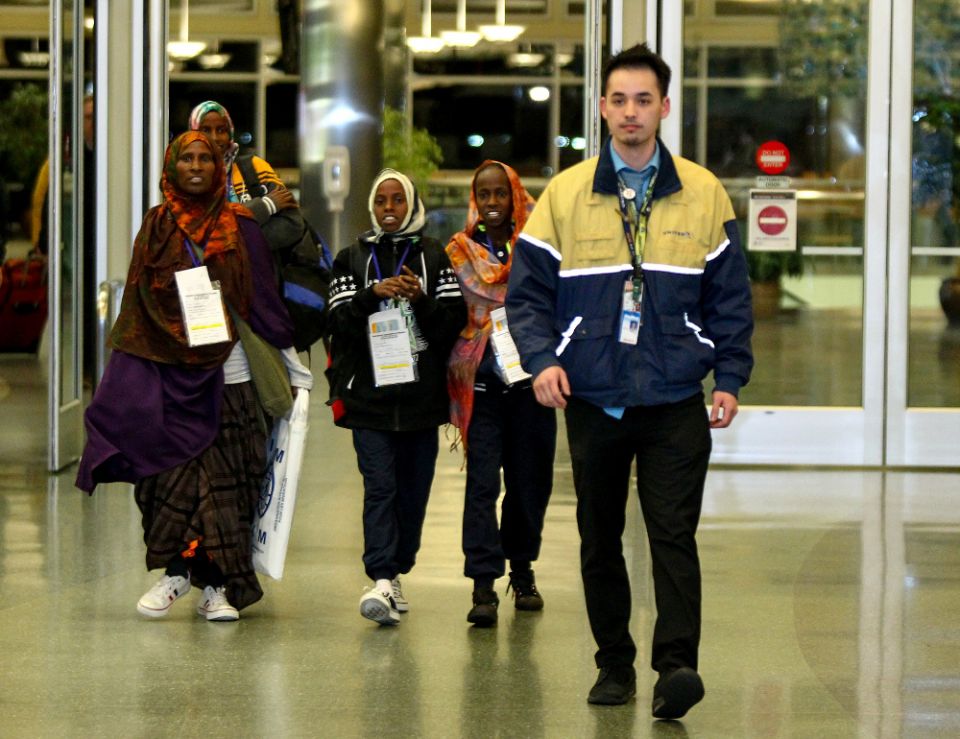 Somali refugees are escorted by a United Airlines representative as they arrive at the airport Feb. 13 in Boise, Idaho. The chairman of the U.S. bishops' migration committee sent a letter to the U.S. Department of Homeland Security and the U.S. Department of State urging dialogue on the U.S. Refugee Admissions Program. (CNS/Brian Losness, Reuters)

In his letter, released March 27, Bishop Joe Vasquez of Austin, Texas, chairman of the U.S. Conference of Catholic Bishops' Committee on Migration, said: "We are deeply concerned about both the historically low target that the administration has set for refugee admissions for fiscal year 2018, as well as by the extraordinarily low number of refugees that the United States is on pace to resettle during the current fiscal year."

He said the current level of refugee arrivals "leaves thousands of vulnerable people in harm's way and searching for protection. Most often they are at-risk women and children who are too vulnerable to remain in the region and/or in situations too dangerous for them to wait in the host country until the conflict at home has ended."

Another letter, signed by more than 1,600 Catholic organizations, priests, women religious and lay Catholics, similarly urged the government to take action, urging the Trump administration "to listen to our communities when we stand in solidarity to welcome refugees in this moment of global need."

Both letters urge dialogue on the U.S. Refugee Admissions Program, pointing out that halfway through the 2018 fiscal year, the U.S. federal government had welcomed approximately 9,600 refugees, less than 25 percent of the refugees allowed for this year.

Vasquez wrote that welcoming refugees is "integral to our life of faith" and said that in this spirit, the U.S. bishops would like the Trump administration "to renew a bipartisan commitment to resettlement for refugees, including religious minorities."

He also urged that at least 45,000 refugees be admitted this year and 75,000 next year asking that the Homeland Security Department "work to process refugees in a more robust, efficient and transparent manner."

The decreased number of refugee resettlement cases in the United States has already impacted the work religious groups, including the USCCB, provides.

A Religion News Service article in mid-February said USCCB officials expected to close 15 resettlement sites this year and more than more than 300 Catholic Charities employees, who work in this area, could see a temporary or permanent layoff or job reassignment due to decreased number of refugees coming into the country.