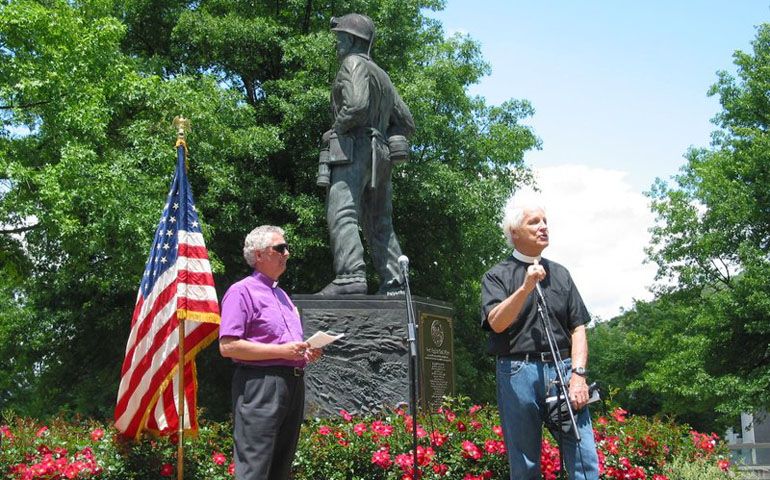 Lutheran Bishop Ralph Duncan, left, listens while the Rev. Jim Lewis, an Episcopal priest and member of Interfaith Worker Justice, speaks during a May 23 prayer service held in front of the West Virginia Coal Miner memorial statue in Charleston, W.Va.

UPDATE: On Wednesday, a St. Louis judge ruled Patriot Coal Corp. can rework its union contract as well as slash health benefits to retired union workers as part of its path out of bankruptcy. Brian Roewe has the story on the ruling.

On the grounds of the state capitol in Charleston, W.Va., more than 150 people gathered Thursday to pray beside the West Virginia Coal Miner memorial statue. The occasion for the service was not the loss of lives from a dangerous line of work, but the potential loss of life-saving health benefits for 23,000 miners and their dependents.

"We call on you, O God of justice: Allow your light to scatter the darkness of greed and dishonesty in order to honor those contracts and keep those promises," prayed Fr. John Rausch, a Glenmary Home Missioner and director of the Catholic Committee of Appalachia.

"Melt the frozen hearts of people indifferent to these workers and grant them the just health benefits they worked for," he said.

The miners in health care limbo are employees of the now-bankrupt Patriot Coal, a company created in 2007 as an offshoot of industry giant Peabody Energy's eastern mines. A year after its formation, Patriot purchased Magnum Coal, a similar offshoot company created by Arch Coal in 2005. The merger of Patriot and Magnum resulted in Patriot assuming responsibility for $1.6 billion in long-term health and retirement obligations of nearly 10,000 miners, many of whom never worked for either company.

When Patriot filed for bankruptcy in July, it cited the enormous benefits obligations to union members among the hurdles to emerging from bankruptcy. The company has argued that restructuring such benefits (to an annual savings of $150 million) is a necessary step to avoid liquidation and further job loss.

"Patriot cannot afford the current level of pay and benefits for union-represented employees and retirees. The Company remains hopeful that it can promptly reach agreement with the [United Miner Workers of America] on a consensual basis," the company said in a statement to NCR.

In justifying the cuts, Patriot has pointed to wage and benefits reductions for nonunion employees. A spokesman for the United Miner Workers of America (UMWA) told NCR those decisions do not relieve Patriot of its previously negotiated obligations.

"These people sacrifice every single day they go to work. They've already made plenty of sacrifices. Our position is that one way or another, we want to make sure that the benefits that these people earned through a lifetime of hard work are fulfilled," said Phil Smith, UMWA communications director.

A November court decision moved the bankruptcy case from New York to St. Louis, where Patriot, Peabody and Arch have corporate offices. Judge Kathy A. Surratt-States has until Wednesday to rule on Patriot's motion for relief regarding the benefits. Her range of decisions includes accepting the proposal to adjust benefits or sending both sides back to the bargaining table.

Negotiations between Patriot and the union have continued throughout the court process. Future hearing dates are scheduled for June, July and August.

The miners' union and its supporters have alleged Patriot's creation was an attempt to relieve Peabody and Arch from a significant portion of their "cradle to grave" benefits to miners and their dependents.

"These are pretty significant obligations that were incurred by other companies, by Peabody and Arch, and then dumped onto Patriot," Smith said. "So Patriot does not have the cash ... to continue paying Peabody and Arch's bills, is essentially what it amounts to."

The union in October filed a class-action suit in West Virginia's Southern District court against Peabody and Arch, alleging that both created spinoff companies "for the purpose of depriving its employees and retired employees of their welfare and retiree benefits."

In an emailed statement, Kim Link, communications director for Arch Coal, refuted the claim that it spun off subsidiaries to Patriot, saying instead the company "sold the former subsidiary companies in question more than seven years ago in an arms-length transaction to Magnum Coal Company," owned at the time by a Boston-based private equity firm.

"Arch Coal had no ownership interest in Magnum and was not involved in the formation of Patriot or its decision to purchase Magnum," Link wrote in the email.

But one study of the Patriot case concluded that the economic conditions and factors surrounding the company's creation make it appear the company "was designed to fail." Bruce Rader, a chartered financial analyst and assistant professor of finance at Temple University in Pennsylvania, said that with the economic conditions at play -- highly competitive energy market, fluctuating market conditions, etc. -- it "would have been nearly impossible for Patriot to remain solvent.

"The company's business model could only make money if coal was priced at or above record highs. ... It was unreasonable to assume that the price of coal would remain high and grow substantially higher," he said in his report.

The "designed to fail" claim is a "desperate attempt to rewrite history," said Vic Svec, senior vice president of investor relations and corporate communications at Peabody.

"Patriot was highly successful following its launch more than five years ago," he said in an emailed statement to NCR, adding that analysts at the time predicted a bright future for the company and that "unforeseen events affecting all coal producers" brought about Patriot's financial woes.

Patriot has stated it is investigating the conditions of its formation and filed a lawsuit in March to ensure Peabody continues to honor obligations in full to around 2,000 miners.

Other attempts to secure the miners' benefits include a resolution in West Virginia's state Legislature calling on Patriot to also honor its obligations. Separate bills in both the U.S. Senate and House have been proposed to extend federal welfare to miners and dependents who lost health benefits through company bankruptcy; both remain in committees.

Outside fiscal and corporate responsibility, religious leaders have highlighted the moral responsibility Peabody, Arch and Patriot have to the miners.

"It's not because of our economics; it's not because of our sociology. It is because workers must be treated as brothers and sisters; they are sons and daughters of God. They are subjects and not objects," said Rausch, who has attended numerous rallies and was arrested at an April 1 protest in Charleston.

Later in April, he and members of Interfaith Worker Justice and Religious Leaders for Coalfield Justice held a fact-finding mission at St. Agnes Catholic Church in Charleston to learn more about the situation and hear from the miners themselves.

Among those speaking was David McCloud, a retired miner and Free Will Baptist preacher. Breaking from his faith's usual avoidance of political issues, McCloud said he felt "the Lord may have called me to open my big mouth" and speak out against Peabody.

"I know we are supposed to depend on the Lord to provide, but sometimes we need to speak out and do something ourselves," he is quoted saying in a report from the daylong meeting.

Titled "Schemes from the Board Room," the report includes testimony from other miners who spoke not only of the impact that lost benefits would have on their own lives but on their churches and communities, as well. Many described their health card as a lifeline toward affording medical care for injuries and conditions developed working in minefields.

"Health care means more to us than a pension. If health care is canceled, we'll have real problems," said Hubert "Skeeter" Lowe, another retired miner.

Without coverage for miners, many worry of the impact on the area's network of health clinics, which relies heavily on insurance payments to remain in operation.

"There's some worry what will happen to these community clinics if people aren't able to at least pay something. ... I think the ramification would be extensive throughout the coalfields," Jesuit Fr. Brian O'Donnell, executive secretary of the West Virginia Catholic Conference, told NCR.

In March, the conference sent separate letters to the CEOs of Patriot and Peabody from the West Virginia Catholic Conference, urging them to heed the Legislature's resolution and honor their "contractually-promised benefits" to the workers.

In addition, bishops Michael Bransfield of Wheeling, W.Va., and David Zubik of Pittsburgh both signed a letter organized by the Federation of Communities in Service and the Catholic Committee of Appalachia that urges all parties involved to protect the workers' "right to health care."

In the letter, they cite Laborem Exercens, a 1981 encyclical from Blessed John Paul II, which recognizes Peabody and Arch as "indirect employers ... whose obligations do not cease with the formation of Patriot, but take up when the first employer, Patriot, can no longer meet its obligations.

"We plead with the bankruptcy court and the boards and executives of Peabody Energy, Arch Coal and Patriot Coal not to disregard the sacrifices miners have endured to their bodies and health to earn corporate profits. In justice, protect the health benefits of retired miners," it concludes.

One executive they have attempted to reach out to is Peabody CEO Gregory Boyce, a Catholic and large donor to the St. Louis archdiocese. A spokeswoman for the archdiocese said Archbishop Robert Carlson has not made public comment on the case, and was not aware if he had met with Boyce.

US military footprint in Afghanistan — and elsewhere — means we owe refugees