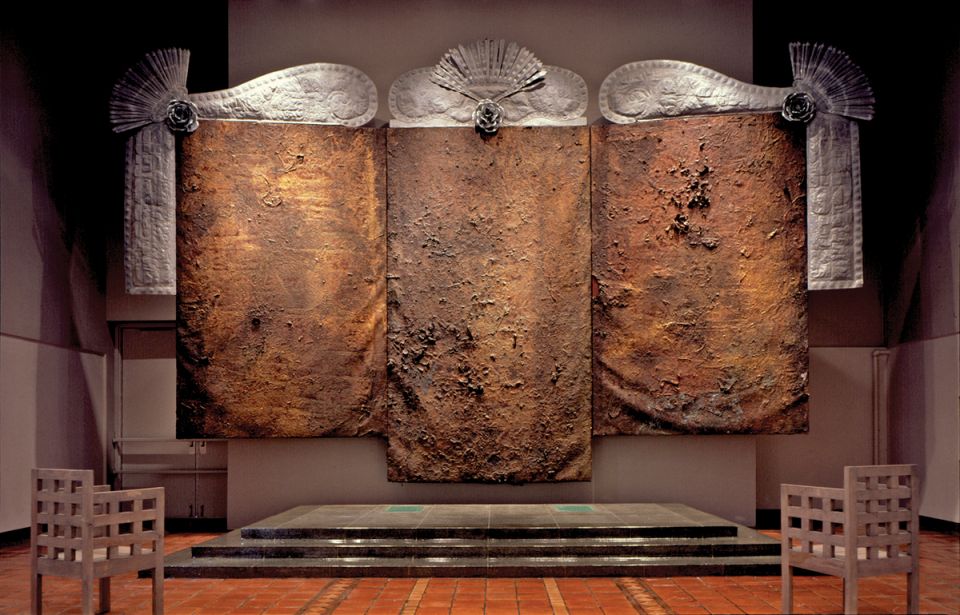 I still remember standing in front of Michael Tracy's enormous triptych on a February 2015 visit to St. Louis University's Museum of Contemporary Religious Art. From a distance, the powerful work's corroded surface could be mistaken for an Anselm Kiefer sculpture, and Tracy's work boldly held up in the enormous gallery, a former chapel with soaring nearly-30-foot ceilings. Both the room and the triptych remind viewers how small they are, which is a respectable thing for religious art to do.

"It looks like it was made for the space," Jesuit Fr. Terrence Dempsey, an art historian and the museum's director, told NCR. "Its dimensions fit the space perfectly."

But perfect fits are rarely completely effortless. Five people had to cut a hole in the wall to forklift Tracy's sculpture, which is 30 feet wide and 24 feet tall and weighs more than a ton, into the gallery. They then had to create a new wall to hold the work.

Luckily, the artist subsequently donated it. "It's just too big to show anyplace else," Dempsey said.

The massive work continues to look out over the rest of the gallery, but it's now joined for the exhibit "MOCRA: 25" (through Feb. 17) by another of Tracy's works. The exhibit celebrates the museum's quarter of a century with the works of 25 artists. Tracy's Oscar Romero cross, first shown at the 1982 Venice Biennale and since donated to the Museum of Contemporary Religious Art, has just come off of a seven-month cleaning. The sculpture memorializes the recently-canonized saint, who was assassinated in 1980 in El Salvador.

Tracy saw a tabloid photograph of the murdered archbishop while visiting Mexico City in 1980 and was so arrested by what he saw that he studied the context around the conflict that had cost Romero his life. The cross is on view for the first time at the Museum of Contemporary Religious Art, and it's one of many examples that attest to Dempsey's commitment to taking risks and thinking broadly about what religious and spiritual art can be.

Prior exhibits have examined the spiritual side of Andy Warhol, AIDS and the Tuskegee syphilis experiment. It's clear the museum, which Dempsey developed from his Graduate Theological Union dissertation, isn't a religious bookstore or church gift shop hawking spiritual tchotchkes. 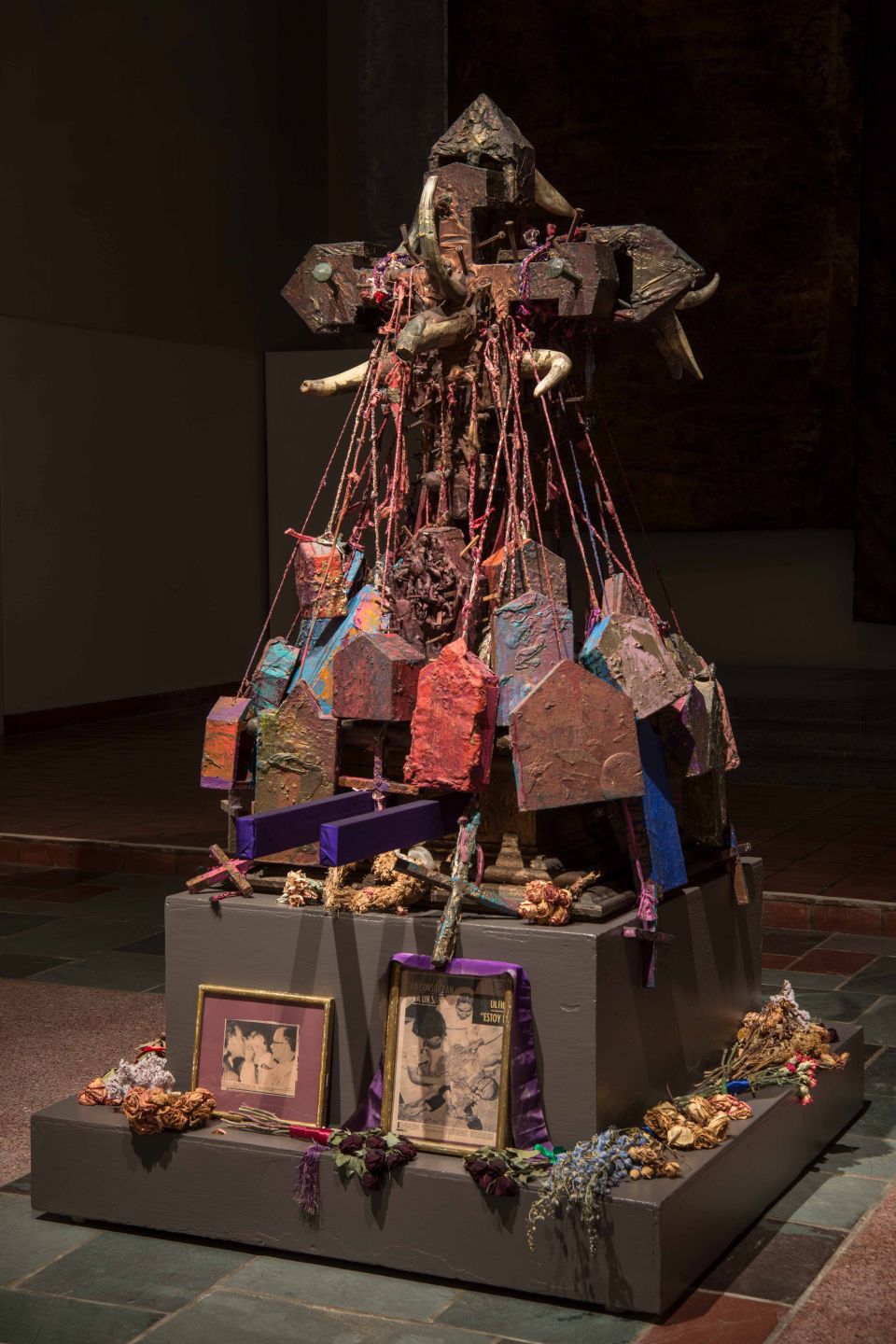 "We've tried to expand the notion of what addresses and engages in the religious dimensions," Dempsey said. "It's not just the gift shop art that people, when they hear the name 'religious art,' reduce to these little statues and bottles with saints in them."

When Dempsey opened the museum 25 years ago, an artist he invited to show told him, "You'd better be doing good work there, because you could ruin my career and my reputation."

Dempsey knows artists don't want to be labeled "religious" for the wrong reasons. "People will think you're doing Hallmark cards or those kind of more sentimental things," he said.

He also runs exhibits by the St. Louis University administration in advance, so it's not caught by surprise. He has yet to receive pushback, he said.

Another artist in the exhibit is the late Cuban painter Juan González. In December 1993, Dempsey traveled to New York to visit his friend, who was dying of AIDS. It took three tries to find a day when González was well enough to have a Mass, and on the third day, the dying man surprised Dempsey with his sudden energy. González, who hadn't been able to get out of bed the previous days, moved a drop-leaf table by himself and reached over a sofa to plug a light in.

During the Mass and subsequent anointing, González had a radiant smile as he sat between his two daughters in his Sunday best, now too large for his shrinking frame. The nearly a dozen people present teared up when González embraced each one at length.

He slipped into a coma the following day and died three days later on Christmas Eve.

"It was at that point that I thought: This is important," said Dempsey. "There is the connection between the religious dimension and people dealing with this life-threatening disease."

He included González's work among that of some two dozen other artists in the 1994 exhibit "Consecrations: The Spiritual in Art in the Time of AIDS." The opening, which included Pilobolus and Alvin Ailey dancers, was the most glorious in the museum's 25 years, according to Dempsey. "There was just so much love and compassion there," he said.

González's mixed-media "Free Fall," which he created a week before his death, appears in the current exhibit and comes from his Diver series. The work, which references an ancient Greek fresco, depicts people falling into the sea, Icarus-like. "The divers in this final work represent Juan's many friends who had died of AIDS-related complications," the exhibit notes.

Juan Gonzalez, "Free Fall," 1993, from the collection of Teresa and Lawrence Katz. (Courtesy of MOCRA)

Three butterflies on the ocean surface symbolize the Christian belief in resurrection, which González juxtaposes with a classical reference below of an ancient sleeping Eros sculpture. That sleep is doomed to be interrupted, however. González cut a triangle out of the top of the frame, creating a gash running down the middle of the work and suggesting "the effects of pain we have endured persist," the museum notes, "even as we may hope that the spirit lives on."

Enduring spirit is what Dempsey had been after from the start. He sensed something was going on in the 1980s, so he created a file of 800 artists creating religious and spiritual works that would inform his doctorate.

After completing his dissertation on "The Pursuit of the Spirit: The Re-Emergence of Spiritual and Religious Concerns in American Art of the 1980s," he came to St. Louis University. There, an elderly Jesuit, who at the time directed a historical mansion on campus that exhibited decorative arts, recommended that Dempsey ask to repurpose a chapel that was part of a large Jesuit residence that had been built in 1952. "It has that kind of ersatz Bauhaus look to it," Dempsey said.

The number of Jesuits studying for the priesthood on site had declined from 250 in the mid-1950s to just 25 in 1989, so the Jesuits sold the building to the university and moved to snugger quarters. By 1990, the building was a lay student residence, but no one knew what to do with the chapel. Dempsey proposed turning it into an interfaith art museum.

Some of the fraternities wanted to turn it into a fraternity meeting hall. "Suddenly, my proposal rose to the top," Dempsey said. 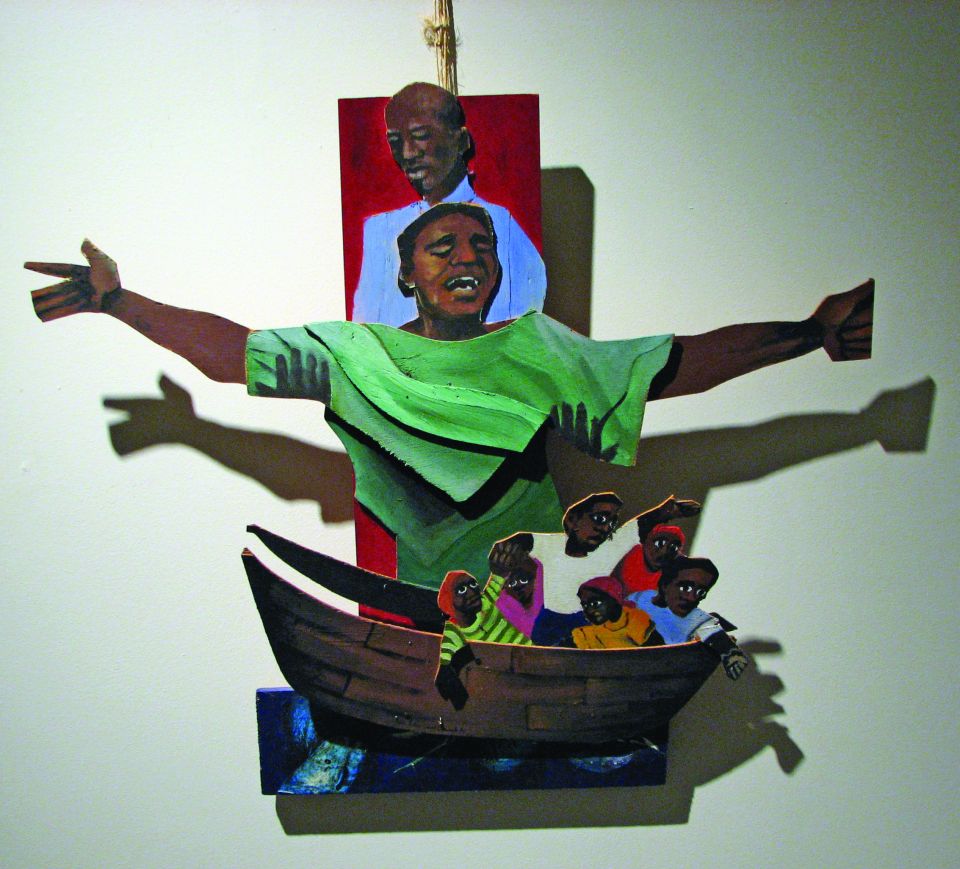 Since opening the Museum of Contemporary Religious Art, Dempsey and assistant director David Brinker have shown more than 55 exhibits of some 230 artists, mostly American but also some hailing from Australia, France and Germany. "Like with any project, what you think is going to happen at the beginning suddenly gets very expansive," Dempsey said.

Having loved the Alvin Ailey dance company from his graduate school days, when he volunteered at Zellerbach Hall at the University of California, Berkeley and saw Ailey dance, Dempsey showed "Body and Soul: The Alvin Ailey American Dance Theater" in 1993.

"What I wanted to do with it was to show that this little museum in St. Louis could connect with one of the major choreography figures in the world, Alvin Ailey," Dempsey said. "We had gospel singers here for that. It was really: Let's see how we can expand it."

Expand it he did, with what he believes to be the only interfaith museum of contemporary art anywhere in the world, and others have taken notice. The Museum of Contemporary Religious Art was one of the institutions that New York's Museum of Biblical Art looked to for inspiration, said former director Ena Heller, who now directs the Rollins College Cornell Fine Arts Museum in Winter Park, Florida. (The Museum of Biblical Art in New York since shuttered.)

Dempsey and the Museum of Contemporary Religious Art have contributed to a shift in the dialogue about religion's place in art, particularly contemporary art, according to Heller.

"MOCRA filled a void in the landscape of museums when it first opened and offered a model — showcasing the religious in contemporary art — that has since been adopted by other institutions and researchers," she said. "Their exhibitions highlighted the art without shying away from unpacking the religious meanings, and that is a lesson learned for today's museums."

Dempsey, for his part, remains humble about his achievements. "So far so good," he said. "After a quarter of a century, they haven't shut us down yet."

'Soul of a Nation' showcases timeless power of black art