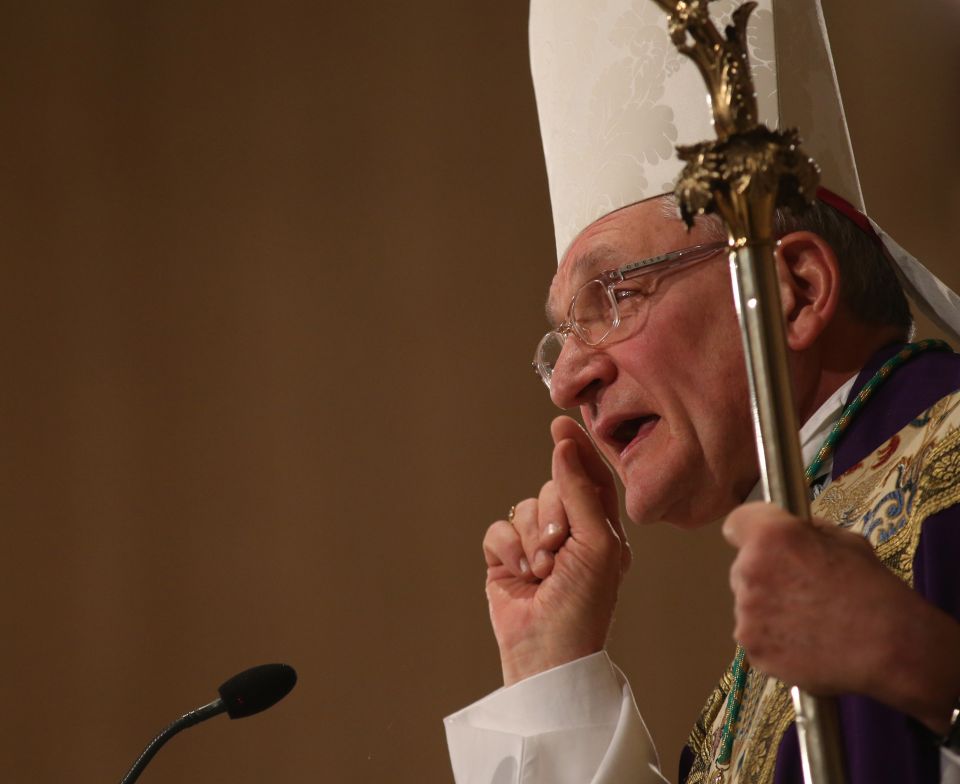 Bishop David Zubik of Pittsburgh delivers the homily during the closing Mass for the National Prayer Vigil for Life in 2016. Zubik has criticized the new tariff, calling it "a lose-lose proposition." (CNS/Bob Roller)

Press groups, one U.S. senator -- and now a bishop -- have appealed to Commerce Secretary Wilbur Ross to get rid of the tariff, which took effect Jan. 11.

"They already passed a 6.6 percent increase on to us," said Carmella Weismantle, operations manager and director of advertising for the Pittsburgh Catholic, the diocesan newspaper. After experiencing no newsprint price hikes last year, Weismantle said in a Jan. 25 telephone interview with Catholic News Service, the increase comes to about $6,700, based on the newspaper's typical press run, page output and publication schedule.

Before the day was out, Weismantle got an email from her printer notifying her of a second price increase.

"As the publisher of the second-largest circulated newspaper in western Pennsylvania, I oppose these newsprint tariffs," said Bishop David Zubik of Pittsburgh in a Jan. 31 statement.

"Newspapers provide the most reliable information and the greatest platform for genuine debate. Should they disappear, our ability to make wise decisions as a democratic society would be severely impacted," Zubik added. With tariffs, he said, "newspaper workers will lose their jobs. No one will benefit. The tariffs are a lose-lose proposition."

"The Catholic press is an essential source of information and formation for helping Catholics live out their faith. We are concerned about anything that makes this mission more challenging for our member publications, including the potential impact on printing costs and overall budgets that such a tariff could have," said a statement by Joe Towalski, president of the Catholic Press Association of the United States and Canada. "At this time, the CPA is still learning about and monitoring the tariff situation."

Towalski, who also is editor of The Visitor, newspaper of the Diocese of St. Cloud, Minnesota, and diocesan communications director, said he received an email Jan. 24 from his printing representative to plan on a 3 percent increase for paper costs, but the increase could be as high as 8 to 10 percent. "We just do not know as of today," Towalski said his printer told him.

The tariff was imposed after a complaint lodged by the North Pacific Paper Corp. in Longview, Washington, which goes by the name NORPAC. The company contended Canada was illegally subsidizing its newsprint industry. The U.S. government investigated, sided with NORPAC and imposed the tariff.

NORPAC did not respond to an interview request by CNS. "This decision will protect American jobs in Washington, Mississippi and Georgia, and may even serve to create jobs in the U.S. as idled paper machines restart," said NORPAC CEO Craig Anneberg in a Jan. 9 statement posted on the firm's website.

But press groups warn that thousands of jobs in other industries are at risk due to the tariff ruling.

The Commerce Department "should find a new way forward that does not place such an unfair and unwise burden on an already at-risk and extremely vital American industry that provides so many jobs and so much value to New Yorkers from one corner of the state to the other," said Sen. Chuck Schumer, D-New York, in a Jan. 26 letter to Ross.

"I am all for fair trade, and I lead that fight on many fronts -- especially against China -- but when the federal government tries to put in place duties that will lead to a loss of American jobs, a rise in prices and a diminution of top-notch journalism and information to residents across upstate New York it's time to yell: 'Stop the presses!'" Schumer said.

"This is something we don't need," said Mark Cohen, president of the Pennsylvania NewsMedia Association. "We just think this is real troubling," especially for an "industry that is in transition."

There are "some incredibly big repercussions for our members and for the industry across the United States," said Rebecca Snyder, executive director of the Maryland-Delaware-D.C. Press Association. "Newsprint prices are going to go up significantly, 10 percent. That's a pretty big cost to absorb," she added. "It stresses an already-stressed industry."

Canadian newsprint is being more sought by U.S. newspapers as U.S. mills have shuttered due to slow business. Newsprint usage is down, by some estimates, as much as 75 percent from its peak due to fewer and thinner publications, operating on a reduced publication schedule and circulation. Despite the reduced demand, prices rose during the newspaper industry slump as mills converted to more profitable forms of paper manufacturing.

The newsprint tariff is another skirmish in trade battles between the United States and Canada over the past year.

Last year, the United States imposed tariffs of up to 18 percent on Canadian lumber. Canada retaliated by sharply restricting imports of Wisconsin dairy products. The two countries are, with Mexico, trying to renegotiate the North America Free Trade Agreement, which took effect in 1994. Some progress in talks has been reported, but many big-ticket issues remain.