In 1947, a young Holy Cross priest, Patrick Peyton, founded Family Theater Productions in Hollywood, California. His mission was to preach the importance of family prayer to the world and invite notable Hollywood celebrities to assist him, first via radio and billboards, then through film and television. His calling would take him around the world, preaching the power of the rosary through his Family Rosary Crusades attended by tens of thousands of people.

Peyton's work was an ambitious undertaking, but as Family Theater's new documentary release, "Pray: The Story of Patrick Peyton," shows, the now Venerable Patrick Peyton was indefatigable and committed to prayer, the rosary and Our Lady. 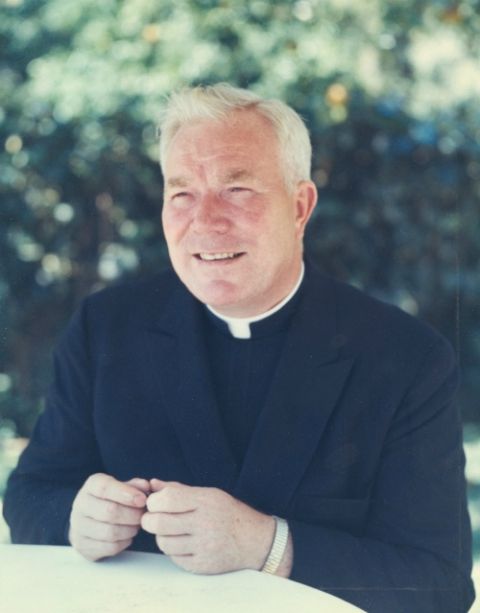 As Peyton says in the film, "I'm for God, for peace, justice, mercy, truth, love. I'm for stronger homes and loftier lives, and the better use of time. But first of all, I am for prayer, family prayer, because the family that prays together, stays together."

Born in 1909 in Attymass, County Mayo, Ireland, into a large, devout Catholic family, Patrick and his brother Thomas immigrated to the United States in 1928 to look for work. They stayed with one of their sisters in Scranton, Pennsylvania, and Patrick eventually found a job as the sexton of St. Peter's Cathedral in Scranton.

Patrick had been an unruly youth but had also considered the priesthood growing up. After hearing a Holy Cross priest preach in 1929, both brothers went to Notre Dame, Indiana, to enter the minor seminary.

During his years of formation and education, Peyton fell ill with tuberculosis. After praying to Our Lady, he was cured. He finished his theological studies and, a few months before Pearl Harbor, was ordained alongside his brother at Basilica of the Sacred Heart at Notre Dame in 1941.

Peyton's convictions about prayer are never more clear than when a college student asks him about the role of prayer in our busy lives. Peyton replies:

The role of prayer is like asking: What is the role of air for breathing? If we connect with God and each other, other things will take care of themselves. The family unit would then impact society. Prayer is the solution to problems of today, not just saying prayer but letting prayer change you, not just reciting Hail Marys. ... Fathers make your wives proud that she chose you, make your children proud that they have a father like you, and prayer will transform your life.

One surprising fact revealed in the film is that through the efforts of business magnate J. Peter Grace, a friend of Peyton who had significant holdings in Latin America, funding was funneled from the CIA to sponsor the rosary crusades in Chile, Brazil, Venezuela and Colombia.

According to Holy Cross Fr. David Guffey, current national director of Family Theater Productions, the practice was stopped by the Holy Cross provincial superior in 1964 when he learned of this from the then-president of University of Notre Dame, Holy Cross Fr. Theodore Hesburgh. The Vatican learned about it at about the same time and said the practice had to end.

Guffey believes that Peyton was probably unaware of where the funding originated and halted it immediately.

As Peyton's rosary crusades and presence in the media increased, helped by celebrities such as Jackie Gleason, Lucille Ball, Frank Sinatra, Bing Crosby and Bob Newhart, the Vatican recognized his work in evangelization by now St. John Paul II.

The film is filled with original archival footage and recent interviews with family members in Ireland and the U.S., friends, and those who worked with Peyton, such as Dorothy Halloran of Albany, New York. She was a student at nearby St. Rose College when she and others volunteered with the numerous mailings that Peyton initiated for his rosary and prayer crusades. She assisted him for decades.

The film is directed by documentarian Jonathan Cipiti and produced by Megan Harrington, who took a small crew to Ireland for some of the shooting. "Pray" shows the human and spiritual side of Peyton, whose cause for canonization was launched in 2001. He was named venerable by Pope Francis in 2017.

While it may appear to some that the rosary has lost some of its meaning for Catholics, my interview with Guffey about the film, Family Theater Productions and Holy Cross Family Ministries shows that prayer and the rosary are still vitally important to Catholics in the U.S. and around the world. The interview has been edited for length and clarity.

Pacatte: Father Dave, how did you get here, to Hollywood and filmmaking as a Holy Cross priest, following in Fr. Peyton's steps?

Guffey: I grew up in Mount Carrol, Illinois, where the nearest Catholic school was 50 miles away, so I attended public schools. But I was always serious about my faith. I thought I wanted to be a lawyer growing up and while taking part in a leadership conference at Notre Dame University when I was a junior in high school, I fell in love with the grotto.

I went to university there and enjoyed working at the campus radio station. By my junior year, I was struggling with the idea of a vocation to Holy Cross. I wasn't sure immediately, but the seminary and religious life, you take it step by step. I entered in 1984, took final vows in 1990 and was ordained in 1991.

Did your studies lead you to Family Theater? 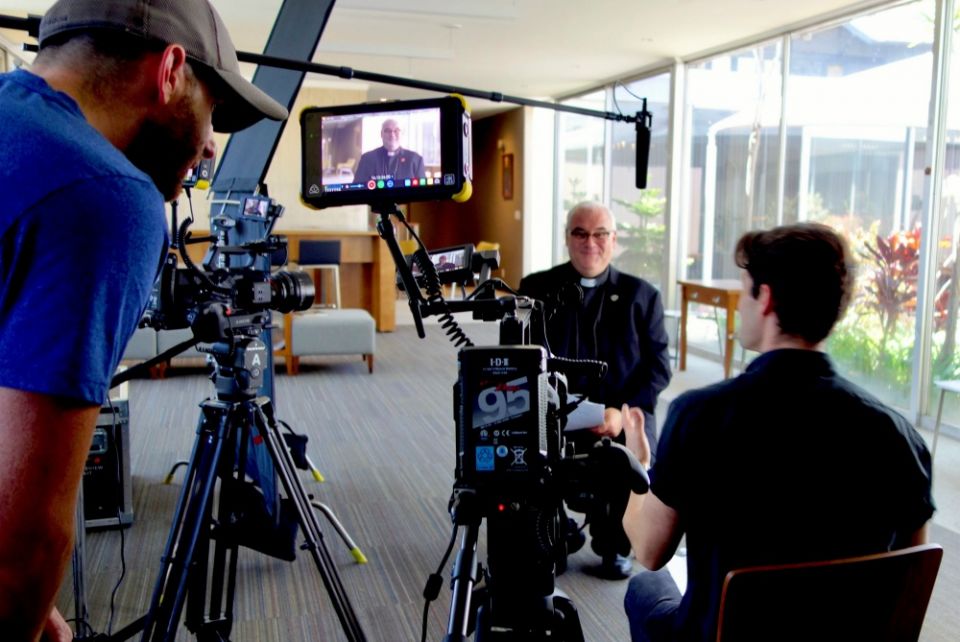 I thought I would be teaching film production at one of our Holy Cross schools and was a teaching assistant at Loyola Marymount University my last two years there. But after graduation in 2008, I was assigned to Family Theater as a video producer, then I replaced Holy Cross Fr. Wilfred Raymond as national director in 2014.

After Peyton's death in 1992, Family Theater slowed down until Fr. Raymond's appointment in 1999. He relaunched video production and other media initiatives. I think I am here for the long haul to continue Fr. Peyton's legacy.

How does Family Theater reflect the charism of Holy Cross: "To make God known, loved and served," as expressed by your founder Blessed Basile Moreau?

Through preaching and teaching. We see our media work as an extension of our preaching and teaching. This goes back to our founder, Holy Cross Fr. Basile Moreau, who published music, books, pamphlets and was a frequent contributor to newspapers. In the United States, in the middle of the Civil War, the Holy Cross order started Ave Maria Press and Ave Maria magazine [which folded in the 1970s]; Ave Maria Press continues today. Other priests have done media work, as well.

What other films has Family Theater produced recently?

In the 1990s and early 2000s, we did some short-format documentaries, dramas and catechetical films. In the post-2004 "Passion of the Christ" era, we started looking at feature projects. In 2014, we released "The Dating Project." … We have college hoop film, "The House That Rob Built." It's about the University of Montana's legendary Lady Griz women's basketball coach Robin "Rob" Selvig. 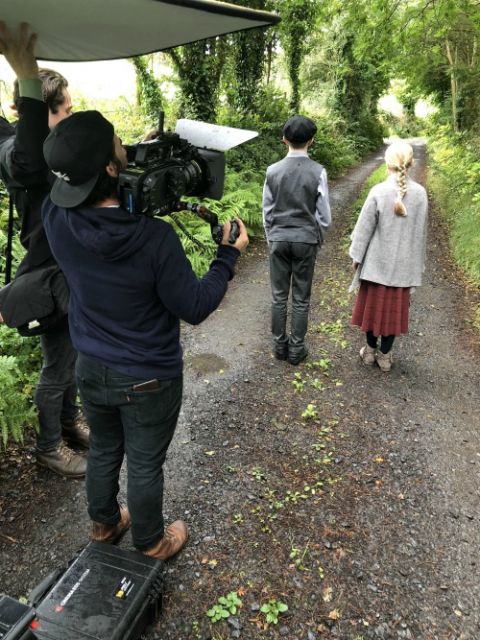 A film crew shoots a scene in 2018 involving young actors in Ireland during the making of the 2020 documentary "Pray: The Story of Patrick Peyton." (CNS/Family Theater Productions)

In 2017, we began the Catholic Central series that takes an entertaining and inspirational look at Catholic answers to life, thought and spirituality. We launched the Spanish language version, Lente Católico last year.

Why did you decide to make "Pray"?

When I got to Family Theater in 2008, we had a big room that we called the vault. It was full of canisters of film and audiotapes in every format from the last 70 years. We then had much of it digitized, but there was so much footage we had never seen, with interviews and talks Fr. Peyton had taped that were never broadcast. We started digitizing even more.

Because it appeared that his cause for canonization was advancing, it seemed like a good time to take these materials and make a film that would bring Fr. Peyton's message to a new generation of people who had not heard of him.

What does "Pray" tell us about the real Fr. Peyton?

That he was even funny when he was saintly or saintly when he was funny. He had a witty way of turning a phrase. He was a simple soul, but he was an operator. He knew how to get people to help him. He was single-hearted and driven. He had his eyes fixed on family prayer. He believed that everyone should pray, everyone.

How many people do you estimate Fr. Peyton reached during his lifetime with the message that "The world doesn't have a prayer without yours" and "The family that prays together stays together"?

I think Fr. Peyton reached the 10 million Americans he hoped to reach to say "thank you" to Mary when he set out on his mission. He was seen by 28 million people at the rallies in his lifetime and was heard by millions via his radio show.

What do you hope people will get from the film?

First, I hope they are entertained by it. It is a hopeful story about a fascinating character. 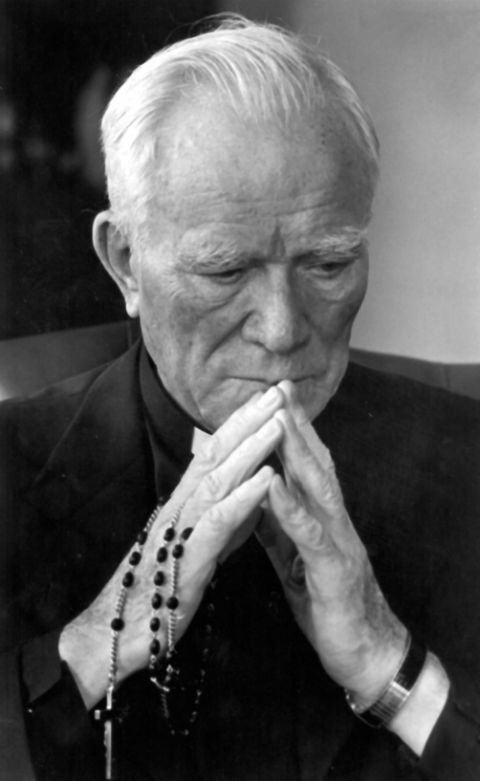 Second, I hope that people will think again about prayer and pray with others, because this is another step. We commissioned a scientific study with CARA [Center for Applied Research in the Apostolate] in 2015 that surveyed 1,000 people in the U.S. about family spirituality and the use of media. We asked parents (ages 25-45 with children in the home), if parents prayed. Most did. Then, if they prayed with other people. Most did not. Only a small percent did — why?

For all sorts of reasons. They considered prayer private or personal, they didn't know how, it had not been modeled for them, they were not sure if family or spouse would want to.

So, the hope is that the film will model family prayer, and if parents have any inclination at all, to try it, even if it's awkward at first.

Is Family Theater still dedicated to spreading the rosary, the message of the rosary?

Yes. In fact, through Holy Cross Family Ministries each year, we distribute over 1 million rosaries around the world, each one packaged with a leaflet in English, Spanish or another local language on how to pray the rosary.

I believe people are rediscovering the rosary. It is a meditation on Scripture, it is the contemplative aspect of vocal prayer. You can get lost in the rhythm of the Hail Marys, taken up into the life of God, whom we need so much in our lives.

What is that message of the film?

It is a timeless message of prayer, the benefits of praying with people you love and families. There had been other documentaries about his life story, but we wanted to show how his message is relevant for today.

Does the rosary have anything to do with what's going on in the world, with social justice?

Yes, because it is seeing and praying the life of Christ through the eyes and heart of Mary. Christ's life is about love, compassion and human dignity. All these themes and virtues come to us through praying the rosary.

Don't cede the rosary to the alt-right

The 25 best prayers of the decade