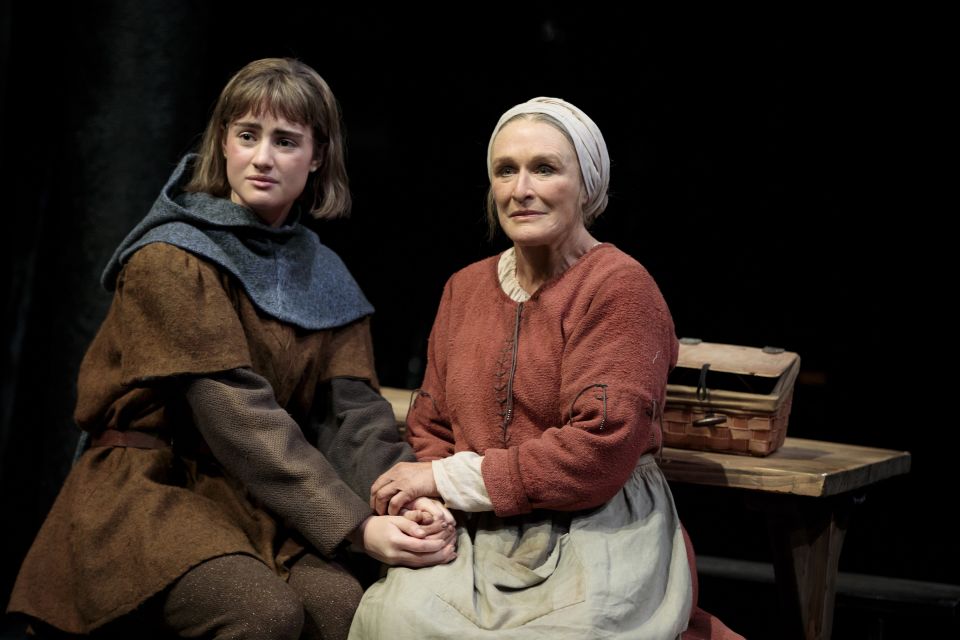 Jane Anderson had a rather odd role model for a young girl, especially a girl who wasn't Catholic. She looked back to the 15th century and found inspiration from a French peasant named Joan who didn't have an easy life. In fact, she was burned at the stake for heresy.

"When I was a teenager I looked at Joan of Arc as an iconic character," Anderson told NCR. "I wanted to be like that, with freedom, doing dangerous things, leaving home, going out into the world and having outrageous adventures."

As an adult she still thought about Joan, but her perspective shifted.

"When I became a mother, I understood what it was like for my mother to have a daughter like me, what it's like to have a young girl who is strange but gifted and a mother who loves her no matter what."

Anderson, a playwright and screenwriter, has combined these two focuses of her inspiration into a play, "Mother of the Maid," in production through Dec. 23 at Off-Broadway's The Public Theater with Glenn Close in the role of Isabelle Arc, Joan's mother. Close, who was unavailable for an interview, can also currently be seen in "The Wife," a movie based on Meg Wolitzer's novel by that name about a woman who questions her life choices as she travels to Stockholm with her self-absorbed husband who is receiving the Nobel Prize for Literature. Anderson wrote the screenplay.

"I don't have a daughter but I have a 23-year-old son," she said in a phone interview Oct. 16, the day before the New York premiere. "You want your child to be safe but adventurous, to be well-behaved but rebellious. You hope when your child goes out in the world he will show well."

The play, which has been greatly rewritten since its 2015 world premiere in Lenox, Massachusetts, draws on Anderson's considerable research for historical context, but employs modern language, with terms like "wonky" and "good to go" and is largely dramatic license.

"I didn't want to write a historical play," she said. "It's a very personal play in the form of historical drama. It's not a [George Bernard] Shaw play, although 'Saint Joan' is magnificent. Shaw wanted a play about politics. I wanted to loosen it up and make it emotional and personal."

"If you want to see a bona fide stage star at the height of her powers, drawing energizing sustenance from an audience's rapt attention, 'Mother of the Maid' is the ticket for you. Ms. Anderson's robustly sentimental play, a take on a saint-in-the-making from a parent's perspective, provides an old-fashioned showcase for the kind of acting with a capital A that once had Broadway theatergoers queuing around the block for returns. … As for Ms. Close, there's not a breath or utterance that doesn't seem both carefully premeditated and absolutely in the moment. … When, in her wrenching final soliloquy Ms. Close's Isabelle talks about shaking her fists at God, you can't help feeling that the Almighty had better take cover."

The Isabelle that Anderson has imagined is rich material for an actress. She travels a long emotional journey over the play's two hours. At the start, she's a hard-working wife and mother, her full-skirted, faded dress soiled by her farm labors. Her conversations with Joan run along the lines of contemporary mother/daughter chats. She wants to know if Joanie is interested in boys and steers the subject around to sex in an attempt to both educate her daughter and find out what she's up to.

When Joanie reveals that she's been visited by St. Catherine, Isabelle sounds more 21st century than 15th as she asks eagerly, "What does she look like?" and "What was she wearing?" The effect is to establish an intimacy between the two and create a family life more accessible than a strict historical account would offer. 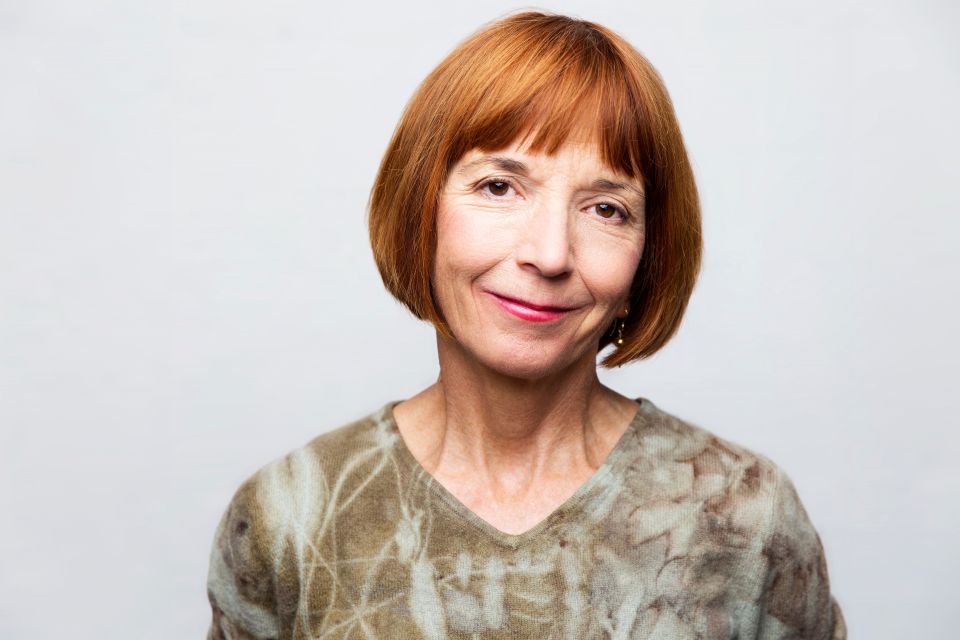 When the local priest arrives at their humble home with a letter from the bishop proclaiming that Joan's visions are authentic, Isabelle slowly moves from skepticism to wonder and finally to pride.

"She's special," she says in awe to her husband, who is unconvinced by the priest's assurances. "Who are we to keep her down? Our girl has been chosen and we should both be fierce proud."

But Isabelle is concerned about her daughter going off to battle with a regiment of men — until Joanie comes downstairs with her newly cut hair and masculine tunic.

"No one's going to be bothering you," Isabelle says dryly. 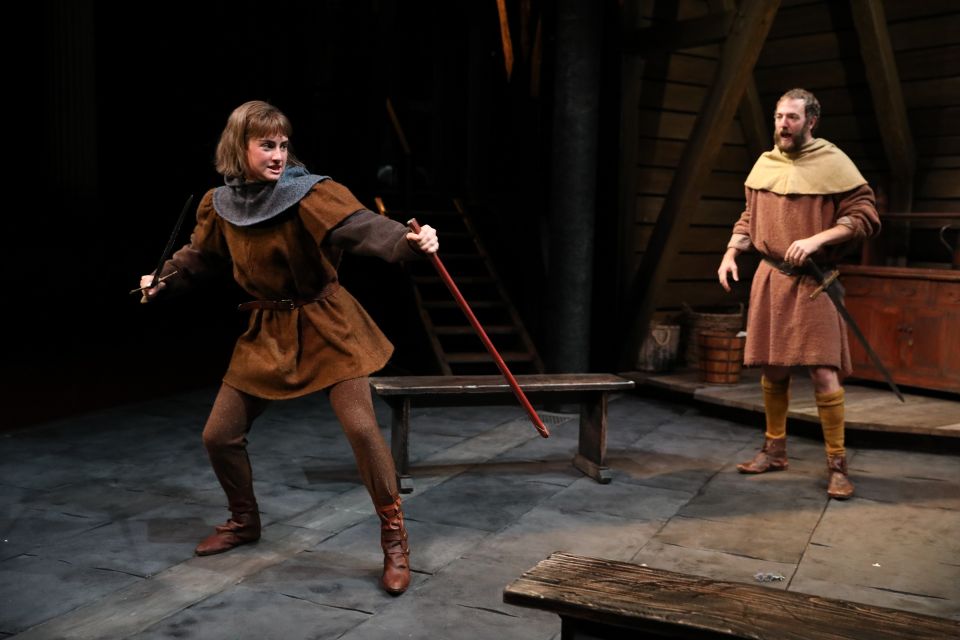 After a while, though, the loss of Joanie begins to weigh heavily on Isabelle, a woman who has never left her tiny village. She gathers her courage and walks 300 miles in the rain and mud, with blisters and aching knees, to the court where Joan is living before heading out to fight against the occupying English army.

She is impressed with the grandeur of her daughter's new life, but when the tide begins to turn against Joan, Isabelle is faced with a spiritual crisis.

"Isabelle believes with all her heart what the local pastor told her," Anderson said. "She didn't see the politics of the church manipulating their lives. Her husband sees it and is afraid their daughter will be manipulated."

We see just how fierce Isabelle's love for her daughter is as she defends her to the lady of the court and all who will listen. This uneducated peasant is even willing to take on the pope.

"I want to meet the man in a hat and tell him my daughter is no heretic," she cries out.

But Isabelle is unsuccessful and Anderson creates a heartbreaking scene of her visiting Joan in prison, seeing her daughter thin and dirty, lying on the cold stone floor, chained to a wall, with an unemptied bucket of her waste beside her. In great anguish, she begins bathing the body of her child before it is to be burned. This is the scene that most affected the playwright.

"I was shaking. It was so awful to imagine," Anderson said. "What an unspeakable thing for a mother to have to do." 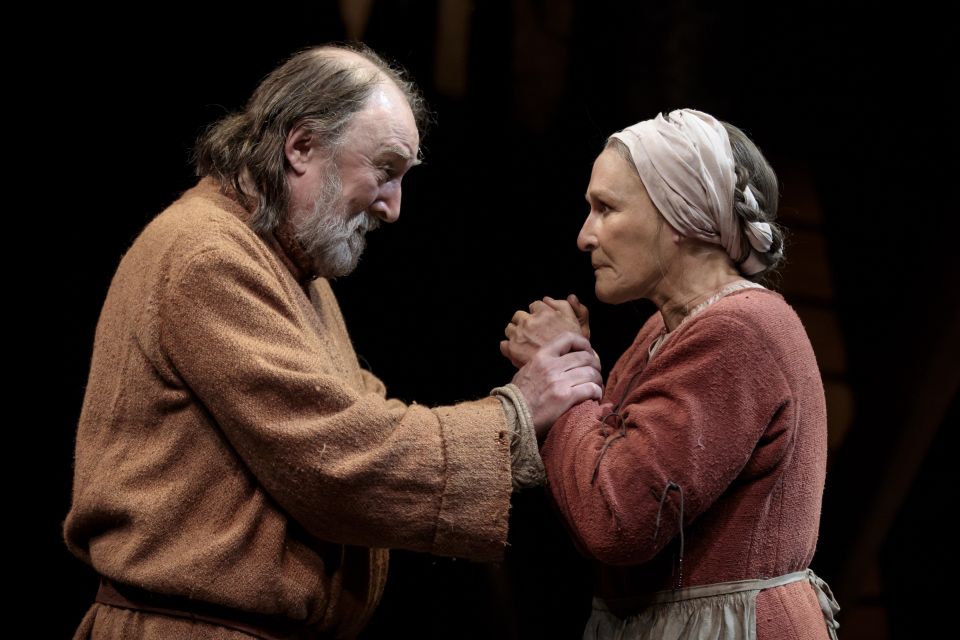 In the rewriting since the 2015 production, Anderson notably eliminated a whole character, St. Catherine, who is now only spoken of as part of Joan's visions.

"She was a kind of narrator, funny and irreverent as she guided us through the play," Anderson said. "I was being far too clever for my own good. It took away from the emotion. Now it's entirely Isabelle's point of view."

The play is presented without a disclaimer in the program stating that it is largely a work of fiction, so audience members may come away thinking they have learned new biographical information. At the end, when told that Joan's father witnessed her execution, leaving him blind, and that he died in a cart on his way home, many in the theatre gasped. While Joan's father, Jacques, didn't live long after her death, he didn't die that day and was not blind.

"This is not a historical play," Anderson repeated. "It's a family drama. I wasn't interested in sticking to the facts. I wanted to find images that best described the emotional journey that my characters were on. As I started writing Jacques's monologue about his being there for his daughter's burning, it only made sense to me that he'd go blind after watching his girl go through such an unspeakably awful thing. It's poetic license."

One factual line comes from Isabelle's testimony from the 1455 hearing to clear Joan's name of heresy, 25 years after she was burned, when Isabelle was in her 80s. Anderson found it "so unbelievably moving" that she made it last line of the play. Its simplicity is powerfully dramatic.

Close stands alone in a spotlight and utters the words of pain and loss Isabelle spoke centuries ago: "I had a daughter once."

A version of this story appeared in the Nov 30-Dec 13, 2018 print issue under the headline: See Joan of Arc through her mother's eyes .