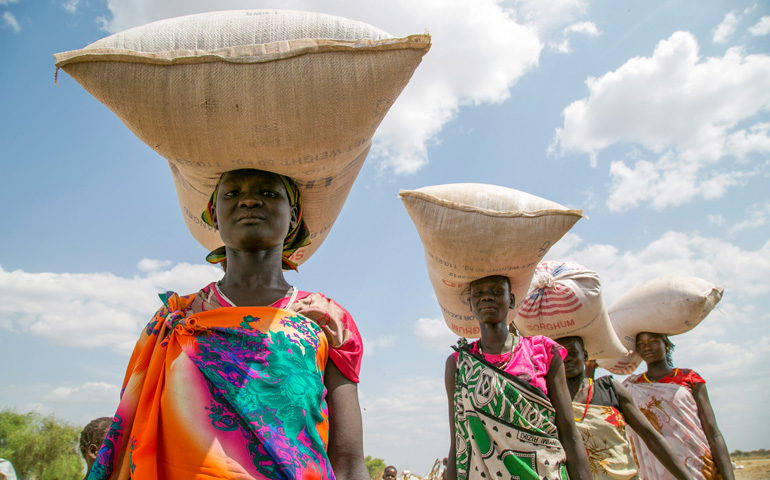 Did you know that there is a severe famine in Yemen, South Sudan, Somalia and Nigeria? I did not know that either until I read a column by Jackson Diehl in this morning's Washington Post. We likely have not heard about this growing human tragedy because that news has been overshadowed by the incessant coverage of Donald Trump. As Diehl puts it, "The continuing Trump circus sucks up so much media oxygen that issues that otherwise would be urgent — such as millions of people starving — are asphyxiated."

And according to Nadifa Mohamed in the June 12 New York Times, "Six million people are at risk of starvation in Somalia, and another fourteen million in South Sudan, Nigeria, and Yemen. It is the gravest emergency since the Second World War, according to the United Nations."

Much of this is due to climate change. What looks to us like a slight rise in temperature can have devastating effects in an already hot, tropical climate. Mohamed reports that "Temperatures have risen in already arid parts of the continent, by one Celsius in Kenya and 1.3 Celsius in Ethiopia between 1960-2006. Communities across the region report droughts occurring every one to two years rather than the previous every six to eight years." These, of course, are average temperatures, not just reports of a hot afternoon somewhere.

Trump administration officials who still refuse to believe in climate change might not just study this data, but visit the region and "feel the heat." Most important, it is critical that the U.S. government support United Nations efforts to bring relief to the starving people of that region. Many groups are reaching out to help, including UNICEF, Save the Children, World Vision and Catholic Relief Services.

Catholic Relief Services relates the story from Somalia succinctly: "Some 260,000 Somalis died in 2010 and 2011 because of a drought-induced famine. It's expected that the current drought will be much worse. Water sources are dry and communities say they've never seen anything like it. Humanitarian experts say the situation could turn into a catastrophe endangering hundreds of thousands of lives —again. Approximately 1.4 million children are at immediate risk of death."

You won't likely hear that on the nightly news, but it's time to notice … and take action. To learn more about how you can help, you can visit the website of Catholic Relief Services.