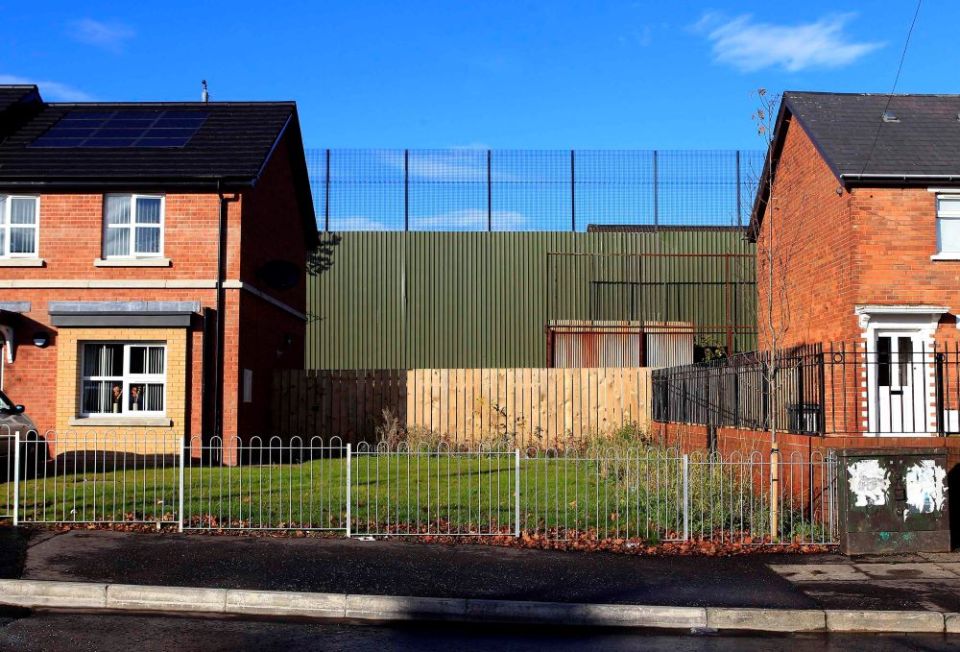 A section of the peace wall that divides Catholic and Protestant communities runs along Alliance Avenue, north Belfast, Northern Ireland, in this 2012 file photo. The first peace wall in Northern Ireland went up in 1969, and about 60 remained as of March, the Belfast Telegram reported. (CNS photo/Reuters/Cathal McNaughton)

BELFAST, Northern Ireland — The territory of Northern Ireland was created in 1921 with the explicit goal of creating a region primarily for Protestants who wished to remain a part of the United Kingdom. Now, 101 years later, Catholics are the territory's largest faith group for the first time and a growing number of citizens identify as Irish, not British.

The results of the 2021 United Kingdom census poll, released on Sept. 22, show that nearly 46% of the country's 1.9 million population were raised Catholic, compared to 43% who were raised Protestant.

This is an increase of 1% of Catholics and a decrease of 5% in the Protestant community. Nineteen percent of respondents said they did not identify with any religion, an increase of 2% since 2011, when the last census was held.

Citizens of Northern Ireland are entitled to claim Irish as well as United Kingdom nationality. The 2021 census also showed that 27% of citizens saw themselves only as Irish, an increase of 8% in the last 10 years. Thirty-two percent identified as British only, a decline.

The violent conflict known as The Troubles, in which more than 3,000 people were killed, wracked Northern Ireland for three decades. It largely ended after the 1998 Good Friday Agreement, a peace deal that had, carefully and deliberately woven into it, a legal framework to end discrimination against Catholics.

The Catholic middle class has grown substantially, and in recent years, Catholic citizens have risen to leading positions in the civil service and the judiciary, among other places. 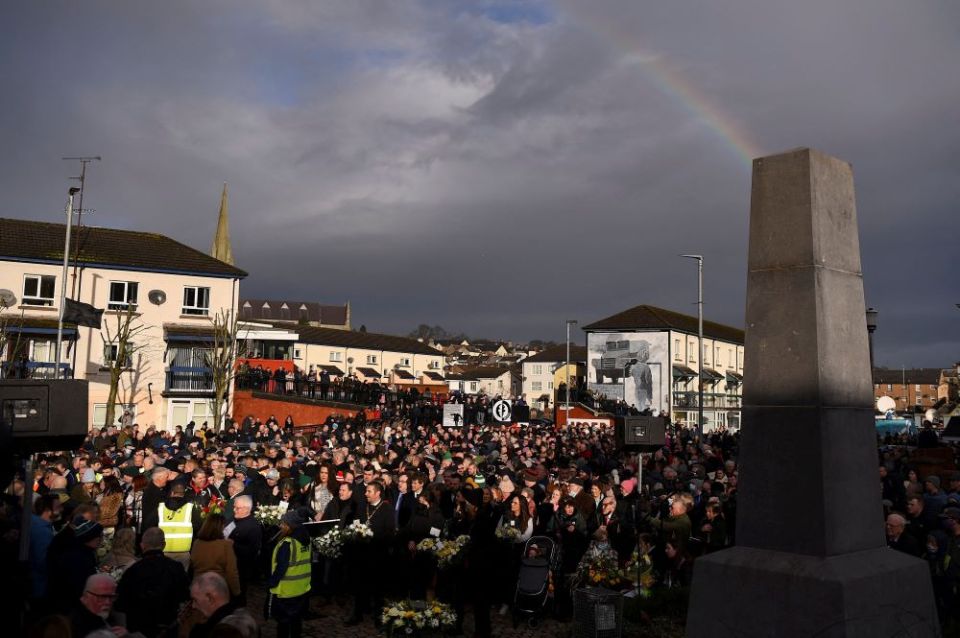 People attend a memorial service to mark the 50th anniversary of Bloody Sunday in Londonderry, Northern Ireland, Jan. 30. Northern Ireland was created in 1921 to create a region primarily for Protestants who wished to remain a part of the United Kingdom. Now. Catholics are the territory's largest faith group for the first time and a growing number of citizens identify as Irish, not British. (CNS/Reuters//Clodagh Kilcoyneters)

Derry Bishop Donal McKeown told NCR he was "not interested" in the announcement that there is now a Catholic majority in Northern Ireland, as comparing numbers of Protestants to Catholics "reinforces a very unhealthy stereotype and reinforces the inaccurate analysis that the problems in Northern Ireland really were a theological problem rather than a political problem."

McKeown said the question should not be "how do we keep a market share, but how do we create new communities and disciples at a very different time?"

The bishop said he gave more significance to the 19% people who indicated in the census that they are not religious.

"It'll be interesting to find out among the no religion people, what percentage of those would formerly have classified themselves as being Catholic or as being Protestant," he added.

McKeown also highlighted census figures showing that 29% of people in Northern Ireland with passports have only Irish passports, an increase of 4%. The number of those with only UK passports has dropped by 8% to 32%.

McKeown said he fears that certain parties may use these figures as "scaremongering" in the future, particularly as it is likely that Northern Ireland could have another election before the end of the year.

In the May 2022 polls, the nationalist Sinn Fein emerged as the strongest party and the former leading Democratic Unionist Party has refused to form a government with them, citing differences over the Northern Ireland Protocol, set up after Brexit to protect the border between the United Kingdom and the European Union.

The Catholic majority figure is seen as a boost to the nationalist community who want Northern Ireland to reunify with its southern neighbour, the Republic of Ireland, an EU member, from which it was partitioned in 1921. At the time of the partition, Catholics represented about a third of Northern Ireland's population.

Colin Harvey, a professor of human rights law at Queen's University in Belfast, described the census results as "a seismic outcome in the history of Ireland."

Harvey told NCR that the figures should be seen in the context of the increased popularity of the Sinn Fein nationalist party and the impact of the United Kingdom leaving the European Union. "It seems to me that it does make the future of the union with Britain look very, very uncertain indeed," he said.

Harvey described Northern Ireland as having been "a place of domination and repression, of human rights abuses, inequality and discrimination" for Catholics.

"One of the developments over decades has been putting in place a legal framework of equality, nondiscrimination and human rights to endure that the discrimination of the past wasn't repeated," he said.

He sees the subject of a United Ireland becoming "the preeminent conversation here in the next decade."

Beyond the questions of political allegiance, McKeown said he has seen a slump in overall church attendance since the pandemic began.

The specific challenge for the church, he said, is: "How do we get people who had gone to church because they had a habit of going to church, how can we actually encourage them to, having broken the habit, to come back again and get involved in the life of communities?"

Like many countries across the world, Northern Ireland is facing a cost-of-living crisis, particularly due to the effects of soaring heating costs, which are partly the result of Russia's invasion of Ukraine. McKeown said he fears a winter of discontent.

"There are big questions to ask, and we have the right to indeed ask those questions and say what's the affect going to be on those who are poorest … most disadvantaged because very often dominant theologies look after the strong, not the weak," the bishop said.