'The Afghanistan Papers' exposes deceit in the conduct of a long, futile war 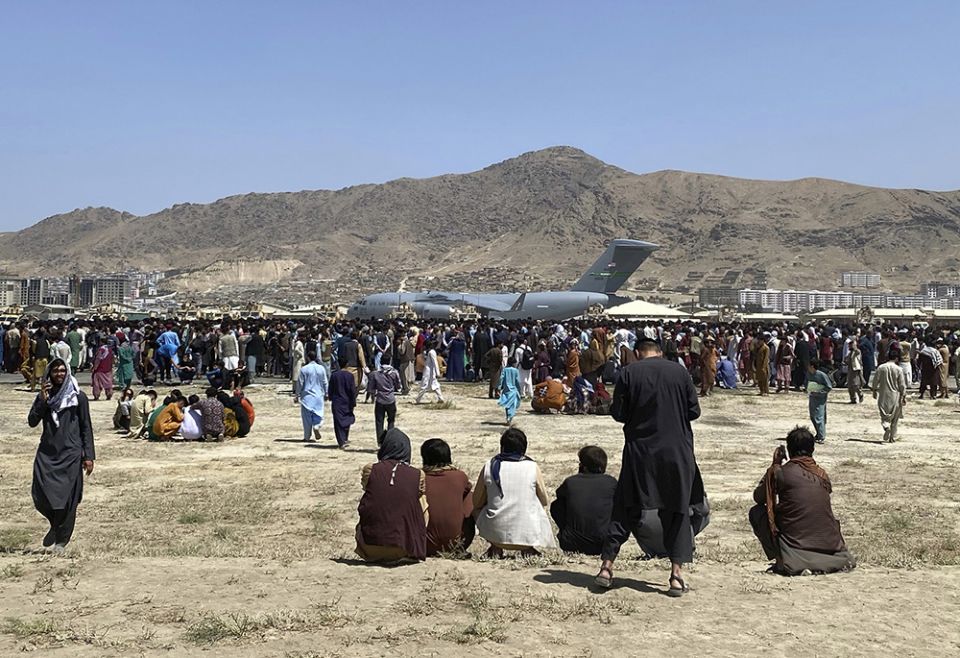 Hundreds of people gather near a U.S. Air Force C-17 transport plane at the perimeter of the international airport Aug. 16, 2021, in Kabul, Afghanistan. More than a year after the Taliban takeover that saw thousands of Afghans rushing to Kabul's international airport amid the chaotic U.S. withdrawal, Afghans at risk who failed to get on evacuation flights say they are still struggling to find safe and legal ways out of the country. (AP photo/Shekib Rahmani, File)

The images of Kabul's chaotic fall to the Taliban one year ago this month may well frame our collective memory of the 20-year war in Afghanistan — images that left many Americans unsettled and embarrassed. "I felt ashamed to be an American," one family member told me recently about the U.S withdrawal.

That is understandable, since many Afghans who assisted the U.S.-led war effort, such as language translators, were essentially abandoned.

Though the Taliban takeover of the Afghan capital had been expected, it unfolded "more quickly than we had anticipated," President Joe Biden rather plaintively said the day after the Aug. 15, 2021, downfall. 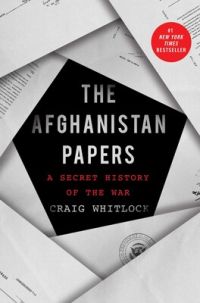 THE AFGHANISTAN PAPERS: A SECRET HISTORY OF THE WAR
By Craig Whitlock
368 pages; Simon & Schuster
$30.00

Yet, as bad as the U.S. withdrawal was — in what was a very stark and early embarrassment for Biden's young administration — the real shame was the conduct of the war itself, a fact overwhelmingly supported by the damning evidence in Craig Whitlock's bestselling The Afghanistan Papers: A Secret History of the War.

Though published as last August's events unfolded, the book still deserves our attention and gratitude a year later. Based on Whitlock's reporting that originally appeared in The Washington Post, The Afghanistan Papers shares a lineage with the Pentagon Papers, which exposed similar duplicity and deceit in the conduct of the Vietnam War.

As with the Pentagon Papers, legal wrangling became part of the narrative of what we know now. The Post successfully sued the U.S. government to obtain the documents on which the reporting is based — official government "lessons learned" interviews with hundreds of military officials, diplomats, aid workers and Afghan government officials.

In his introduction, Whitlock said the Post argued in court that "the public had a right to know the government's internal criticisms of the war — the unvarnished truth."

The unvarnished truth, not surprisingly, is damning — and the echoes with Vietnam are striking. The interviews, Whitlock said, "showed that many senior U.S. officials privately viewed the war as an unmitigated disaster, contradicting a chorus of rosy public statements from officials at the White House, the Pentagon and the State Department, who assured Americans year after year that they were making progress in Afghanistan.”

In other words, they knew what Whitlock calls "the false narrative of progress" was exactly that — false.

It is true that the American-led forces achieved a relatively quick victory in defeating the Taliban in late 2001. But after that, the U.S. mission in Afghanistan became unglued, with no one quite sure what it was about anymore. "In a jarring disconnect, the United States and its allies could not agree whether they were actually fighting a war in Afghanistan, engaged in a peacekeeping operation, leading a training mission, or doing something else."

Was the enemy al-Qaida or the Taliban? How long would it take, long term, to claim ultimate victory? Could victory result from helping rebuild Afghanistan? 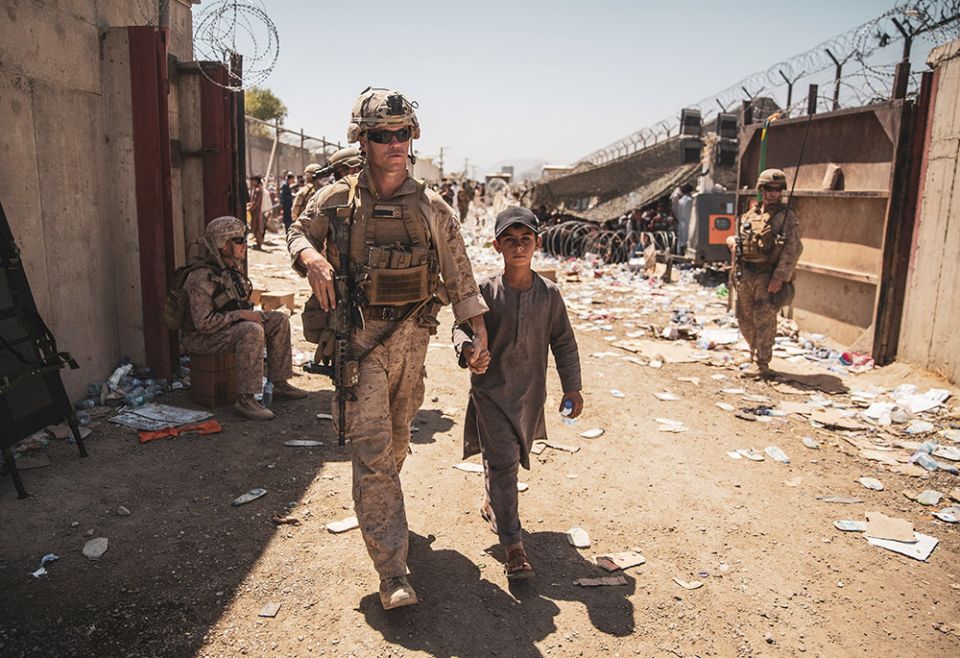 A U.S. Marine escorts a child to his family during an evacuation at Hamid Karzai International Airport Aug. 24, 2021, in Kabul, Afghanistan. (CNS/Handout via Reuters/U.S. Marine Corps/Sgt. Samuel Ruiz)

President George W. Bush vowed after the post-9/11 U.S. invasion of Afghanistan that the United States was not going to engage in rebuilding a country that had been war-battered for decades. But that's exactly what happened. Allowing for inflation, the U.S. spent more in Afghanistan that it had in Europe following World War II.

Yet, as Whitlock writes, "Instead of bringing stability and peace, the United States inadvertently built a corrupt, dysfunctional Afghan government that depended on U.S. military power for its survival."

If that's a core truth about the 20-year conflict — that the U.S-supported Afghan government, like the U.S.-supported government in South Vietnam, was a feckless and corrupt ally — there are ancillary truths.

One is that Afghan government troops were just not up to the task of battling and prevailing over a committed insurgency. Most joined the army to collect a paycheck; few said they were willing to sacrifice their lives for the U.S-supported government. "Many collected their first paycheck and disappeared. Others showed up, but without their uniform, gear or weapon, having sold them for extra cash," Whitlock writes.

That was not the only way Afghans used the invasion for their own purposes. In one telling anecdote, the owner of a construction firm had a brother who belonged to the Taliban. "Together, they built a thriving business: the Taliban brother blew up U.S. projects, and then the unwitting Americans paid his sibling to rebuild them," Whitlock writes.

These kinds of facts were well-known to American officials, but all three administrations overseeing the war constantly papered over the reality on the ground. The Bush, Obama and Trump administrations all broke promises about the war, and all three lied to the public.

Donald Trump's eagerness during U.S. talks with the Taliban to claim a public relations victory and garner an eventual photo op with the Taliban (which didn't happen) seems characteristically silly.

Less silly was the Obama administration's damning pattern of lies upon lies. In the "lessons learned" interviews, military officials "described explicit and sustained efforts to deliberately mislead the public,” Whitlock writes of the Obama administration. "They said it was common in the field, at military headquarters in Kabul, at the Pentagon and at the White House to skew statistics to make it appear the United States was winning the war when that was not the case."

While conclusions like that are the bread and butter of this impressive work of reportage, the book offers sharp insight into some of the underlying cultural gaps that also led to the U.S. failure.

U.S. efforts focused on propping up a centralized government. But Afghanistan had no real experience or history with a successful centralized government — ethnic identity and family ties are the country's bedrock. In rural areas it meant little that Hamid Karzai was president, Whitlock notes. One Army officer said the situation was almost comical, saying it reminded him of the Monty Python sketch in which “the king goes riding by some peasant in the dirt and the king rides up and says, 'I'm the king,' and the peasant turns around and says, 'What's a king?' "

The encounter between Afghans and Americans was always fraught: camouflaged U.S. troops with their reflective eyewear “could evoke the extraterrestrial,” Whitlock writes. “For probably 90 to 95 percent of the Afghans that I interfaced with, we might as well have been aliens,” said one army officer.

A U.S-led poppy-eradication program (to curb the drug trade) was bound to fail. In one province, perhaps as much as 90% was income derived from selling poppy. "Yeah, of course they’re going to take up weapons and shoot at you. You just took away their livelihood. They have a family to feed," said one U.S. officer whose quote is one of several in the book that show that not a few U.S. personnel empathized with, and even respected, "the enemy." At the same time, Whitlock is mindful of the sacrifices of American troops, often naming individual acts of courage and valor. 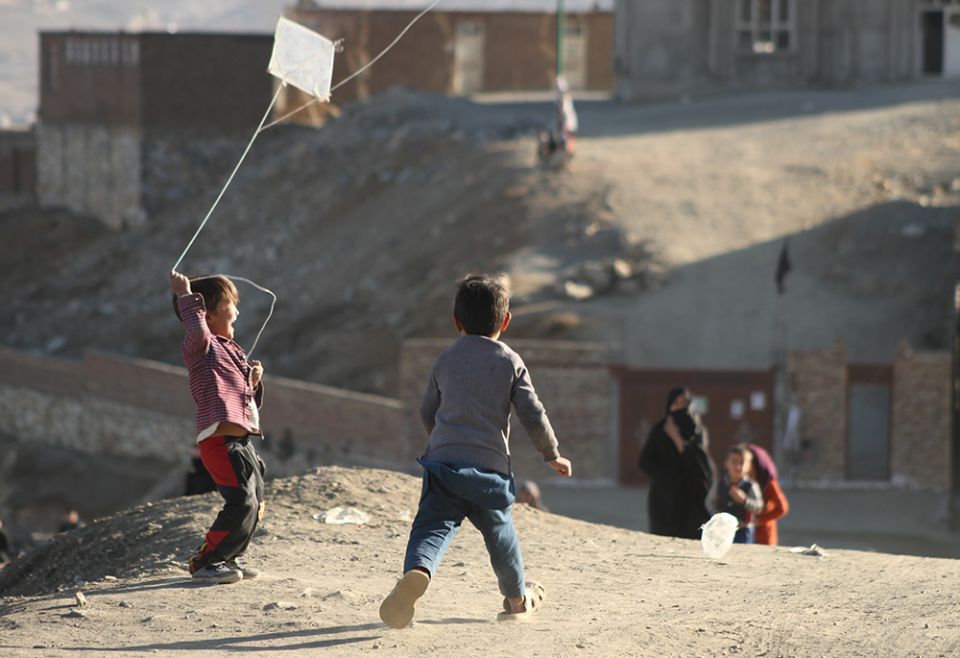 Even so, Afghans often felt looked down upon by the Americans. One governor of Kandahar province said a U.S-led hand-washing humanitarian project was an "insult to the people. Here people wash their hands five times a day for prayers."

Americans, meanwhile, struggled to understand the place they had invaded — a country where those in rural areas live in mud huts and don't have electricity or running water. "You go there and you think you’re going to see Moses walking down the street," said one army officer.

Not surprisingly, time meant different things to Afghans and Americans: Afghans were mostly indifferent to the Americans’ efforts to control time. "We're trying to force them to do things on our time which to them, they don't understand," said one army officer.

Time, of course, ultimately worked to the Taliban's favor. They were masters in patiently waiting things out and preparing for the moment when the United States would simply leave — as the Russians and British had before. In a 2006 classified diplomatic cable, one Taliban leader confidently, and rightly, said of the U.S.: "You have all the clocks but we have all of the time."

Time ran out, as did patience on both sides. The U.S. public grew weary of this "forever war." Meanwhile, many Afghans — maybe most — ran out of patience for U.S.-supported warlords. "Washington's tolerance of their behavior," Whitlock writes, "alienated and angered many Afghans who saw the warlords as corrupt, incorrigible and the root of the country's problems." 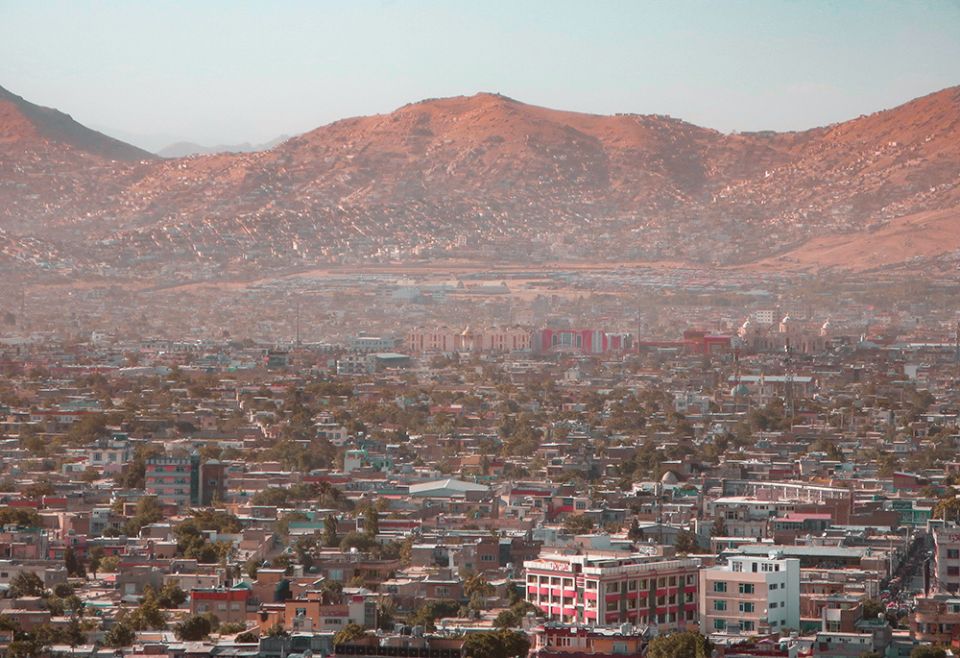 While the Taliban could, of course, be "just as cruel and oppressive" — treating women as "chattel," for example — to many Afghans they were simply the lesser of two evils. One civilian adviser to the U.S. said ruefully: "We didn’t know the population was thrilled with the Taliban kicking the warlords out."

But they were, and given the course and contours of U.S. policy, last year's Taliban takeover was probably inevitable. (Though that doesn't mean, a year later, that the results are happy, especially for women and girls, who are experiencing a new era of oppression.)

"By allowing corruption to fester, the United States helped destroy the legitimacy of the wobbly Afghan government they were fighting to prop up," Whitlock writes. "With judges and police chiefs and bureaucrats extorting bribes, many Afghans soured on democracy and turned to the Taliban to enforce order."

Others, of course, were never enamored of any side but astutely opted to be patient. One senior Afghan defense official recalled meeting with a group of Afghan tribal leaders "who could not stand either side."

"Their response was that we don’t want this corrupt government to come and we don't want Taliban either, so we are waiting to see who is going to win."

Ultimately, after a long and futile war, the Taliban garnered the prize — but almost as if the Americans, in a sad example of deflated hubris, had never even been there.*

*This review has been updated to clarify a sentence.

A version of this story appeared in the Sept 30-Oct 13, 2022 print issue under the headline: 'The Afghanistan Papers' exposes deceit in conduct of long, futile war .

Chris Herlinger is the New York and international correspondent to Global Sisters Report and also writes on humanitarian and international issues for NCR. He reported from Afghanistan in 2001, 2002 and 2007. His 2007 report for NCR can be read here. His email address is cherlinger@ncronline.org.

Opinion | 'The Afghanistan Papers' exposes deceit in the conduct of a long, futile war

Apologies due during anniversary of Vietnam War

Editorial: After Afghanistan, will US be willing to wage peace instead of war?