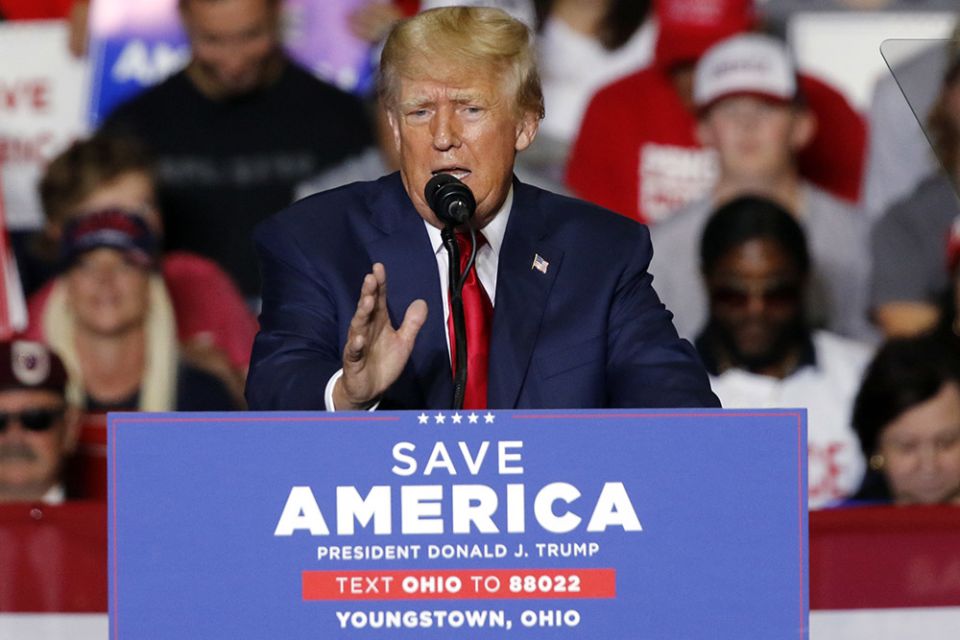 OK, OK. I can't really say I was surprised seeing the name "Trump" and the words "staggering fraud" in the headline of The New York Times story about the lawsuit brought by New York Attorney General Letitia James. "Trump" and "fraud" go together like "ice" and "cream" or "Roman" and "Catholic." We would be shocked to see a headline that paired the former president's name with a word like "sincere" or "appropriate" or "trustworthy."

Still, the sheer number of alleged misstatements of assets was remarkable. The attorney general said that more than 200 false claims were found in 11 years' worth of financial statements. Now we know why Donald Trump invoked his Fifth Amendment right against self-incrimination more than 400 times during his deposition with James' office in August.

Legal analysts warn that Trump can point to the fact that the loans these alleged over-valuations procured are all current or paid off, and that none of the banks that lent him the money are taking him to court. The value of real estate fluctuates all the time, to be sure.

The case is not a slam dunk, but Trump's recklessness may yet be his downfall. It is true that real estate valuations can be wildly subjective, but Trump's appetite led him to make statements that were easily disprovable. My favorite was his claim that his penthouse apartment in Trump Tower was 30,000 square feet when it is really 11,000 square feet. This meant that his apartment was valued at $237 million, not $80 million.

Now, I don't know what anyone does with 11,000 square feet of living space in the first place, but that is not the point. Did Trump not realize that anyone with a good tape measure could easily disprove his claim? Did he really think he was that immune? Suddenly, the fact he seemed not to care he had top secret papers in the basement of his club in Florida is more understandable.

Trump's legal troubles continue to mount. James referred the findings of her civil investigation to the IRS and U.S. Department of Justice, in case they wish to bring criminal charges. The Justice Department investigation into his sequestration of official government documents, many of them highly classified, continues and could be revealing all sorts of wrongdoing. In fact, the same day James announced her suit, a panel of the U.S. Court of Appeals for the 11th District unanimously granted a Justice Department request to be able to continue its investigation into the classified documents among the trove taken in Florida. The Georgia election probe continues and appears likely to indict people close to Trump.

Aside from Trump's legal problems, his political persona takes a hit as the details of his finances emerge. True, many of his followers won't believe the allegations announced in New York this week. Still, the idea that he is a business genius is increasingly hard to reconcile with the facts.

As the Times stated, the lawsuit's "detailed dissection of Mr. Trump's financial statements suggests that the success he has attributed to financial savvy and business acumen is instead the product of fraud and chicanery." That may not resonate with Trump's followers, but I'll bet it really irks him.

The August fundraising reports exposed Trump's fraudulence as well. His political action committee donated $150,000 to the successful effort to defeat Rep. Liz Cheney in the Wyoming GOP primary, and spent $800,000 on travel and events and $3.8 million on legal fees. The PAC is sitting on $99 million; yet, despite the midterm elections being only two months out, it made no other contributions to any GOP candidates. It appears his campaign fund is really his legal defense fund.

None of this will matter to his acolytes, including his Catholic acolytes. Fr. Frank Pavone took to Twitter to register his disapproval of the New York suit. "The Attorney General of New York apparently has nothing much to do. So she's wasting her time suing the most honest man and family in America. What a surprise." Not just an honest man, but the "most honest man." This is sycophancy of the highest order.

The Attorney General of New York apparently has nothing much to do.
So she’s wasting her time suing the most honest man and family in America.
What a surprise.
She made it political from the start by campaigning on it.
This just helps 45 become 47, which he will!#MAGA

None of it seems to matter to Trump himself. He went on Sean Hannity's show the day of the James announcement and said he was able to declassify documents "even by thinking about it."

I am wondering if Pavone explained baptism by desire to Trump and he got confused? Or his grasp of reality, never great to begin with, is becoming even worse.

None of this will matter to voters if the Democrats do not get a handle on inflation, especially oil and gas prices, as the country heads into winter. I got my first heating bill of the season and it had essentially doubled from last winter.

Voters, especially working-class voters, who were willing to overlook the many times Trump defrauded workers in his long career as a real estate developer, refusing to pay them for work they had already completed, are not going to penalize him for doing the same to banks and the government.

Trump has absorbed the legitimate concerns of millions of working-class voters and crafted a culture of grievance that is premised on false ideas about migration and race. These legal troubles do not disturb his hold on the slice of the electorate that has, like Pavone, joined the Trump cult. They still will refuse to believe their lyin' eyes.

It is not shock at his outrageous behavior that will doom Trump. It is exhaustion. People are tired of him and the drama he brings. Even if you like what he accomplished as president, it is enervating to constantly be drawn into his legal woes, the depositions, the growing list of former high-level aides who have turned on him, all of it. It is time for this tawdry show to end.

Opinion | Are people finally getting tired of Trump and his constant drama?

The Francis Effect podcast, bonus episode: Attack on the Capitol