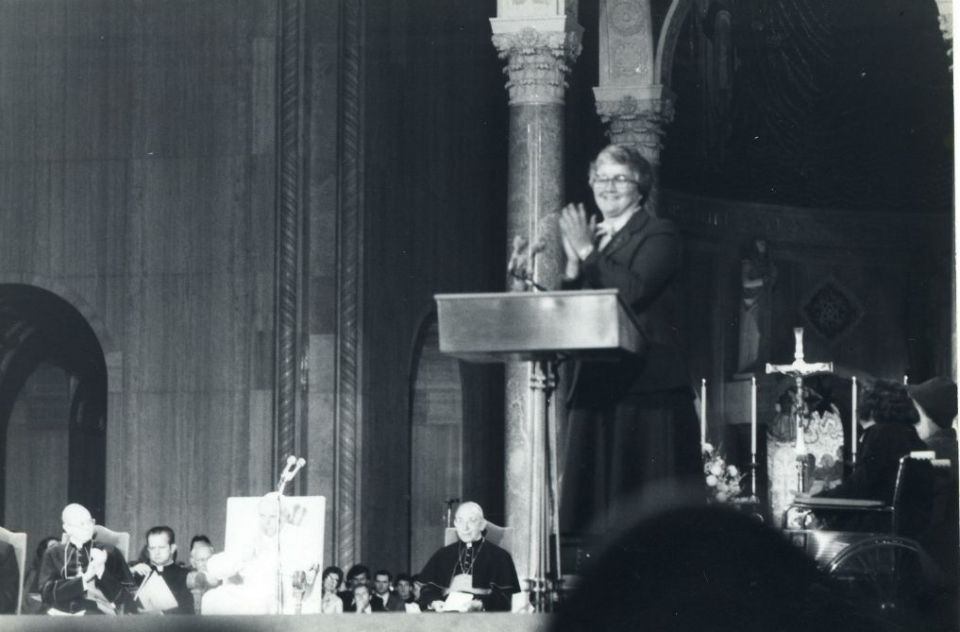 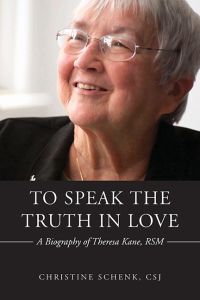 You can tell a book by its cover. The luminous picture of Theresa Kane on the cover of this volume (courtesy of makers.com) portrays a beautiful woman of calm, confidence, vision and joy. Theresa Kane is a Catholic feminist with a powerful claim on the hearts and imaginations of all who want the Roman Catholic Church to be a community of sacrament and solidarity, equality and mutuality. Sister of St. Joseph Christine Schenk tells Theresa's story skillfully in meticulous detail, rendering such a visage all the more remarkable.

Given the injustice that Theresa encountered at the hands of patriarchal church officials, and the pain she suffered when her best efforts were not enough to thwart their raw exercise of power, she has every reason to be angry, even bitter. Instead, she maintains her trust in the Divine, confidence in her own decisions, and an amazing ability to keep learning and serving, all in the good company of her sisters and friends.

The book is a riveting biography of an iconic figure. From her birth into a large Irish family with immigrant parents, to her top leadership of a major religious order and then of the Leadership Conference of Women Religious (LCWR), Theresa's life mirrors the trajectories of many women religious whose Catholic communities provided a route to upward mobility through education.

The story opens with "The Elephant in the Sanctuary," chronicling the fateful day, October 7, 1979, when Theresa, as president of LCWR, welcomed Pope John Paul II on his first visit to the United States. It is safe to say that he never forgot her.

Theresa's clarion call ranks with Martin Luther in terms of its impact on church history: "Our contemplation leads us to state that our Church in its struggle to be faithful to its call for reverence and charity for all persons must respond by providing the possibility of women as persons being included in all the ministries of our Church." Just as Protestants enriched Christianity, so, too, fully empowered women will one day enrich Catholicism, albeit over the dead bodies of many clerics.

Theresa was simply expressing what the Sisters of Mercy of the Union had articulated in their Eighth and Ninth General Chapters in the 1970s about justice and women, including the diaconate for women. She was hardly a Lone Ranger. Rather, she transmitted the sensus fidelium as it was emerging in the whole church. She used her moment in the public spotlight to the max, graciously and with dignity speaking her truth in love.

Dozens of sisters, organized by Network's founding director Dominican Sr. Carol Coston and then Mercy Sister, now Sister of Loretto Maureen Fielder, stood silently that day at the National Shrine of the Immaculate Conception in Washington, D.C. Their co-organizer, Dolly Pomerleau of the Quixote Center, stood with women outside of the church who were not in religious communities. It was an early example of Catholic women, all lay, working together across various starting points. Many inside and out wore blue armbands to show their support for women's ordination. They, like Theresa Kane, were gracious and dignified.

Theresa would be the first to say that every one of her contributions to change was the fruit of many women's collaboration, though in this case, her speech and their witness were not coordinated. It was a smart strategy that freed both actions to have their own integrity. From that day forward, the faithful determination of Catholic women around the world to act as agents and full participants in church and society was clear and unmistakable. Equally obvious, and over time more virulent, was the all-male Vatican's opposition to sharing power with women. That opposition persists at this writing.

Theresa's story is inextricably bound up in the history of the Sisters of Mercy, called Sisters of Mercy of the Americas since 1991 (with the exception of one congregation from the union, in Alma, Michigan). The Mercy sisters are but one of many women's religious communities that have tried to "speak the truth in love" only to have it rejected by many (not all) clerics whose decision-making power is absolute in a patriarchal church. Not all Sisters of Mercy supported Theresa and her council, but the vast majority were with her in spirit and action.

Mercy hospitals had to negotiate the sticky wickets between the institutional church's ban on tubal ligations and the obligation to provide competent medical care. Theresa and her council tried to craft a formula that would be acceptable to Rome and still maintain their conscience-driven position that the issue needed more study, and that in certain cases, sterilization was an ethical choice. The Vatican went nuclear, obliging them via obsequium religiosum (religious submission) to comply or face dire consequences.

Likewise, on the matter of members of religious orders being engaged in political life, the Mercies ran into conflict with the Vatican. Mercy Sr. Agnes Mary Mansour was forced to choose between the appointed position she had accepted as director of the Department of Social Services for the State of Michigan or her Mercy membership. While abortion funding administered by the department was the Vatican's concern, the pernicious novelty in this case was that Vatican authorities overruled the decisions of Mercy leadership. In a travesty that grieves Theresa Kane to this day, Mansour was forced by Rome (not by the Sisters of Mercy) to leave the order, even though as a personal matter she opposed abortion; she continued her government service. The Mercies always considered her a member. She claimed, "I will always be a Sister of Mercy in my heart." Several other Sisters of Mercy faced similar Vatican pressures, and the Vatican even went so far as to threaten to remove Theresa and her colleagues from office if their unjust policies were not followed.

Related: To Speak the Truth in Love: 'To me Theresa Kane was, and is to this day, a sign of hope' 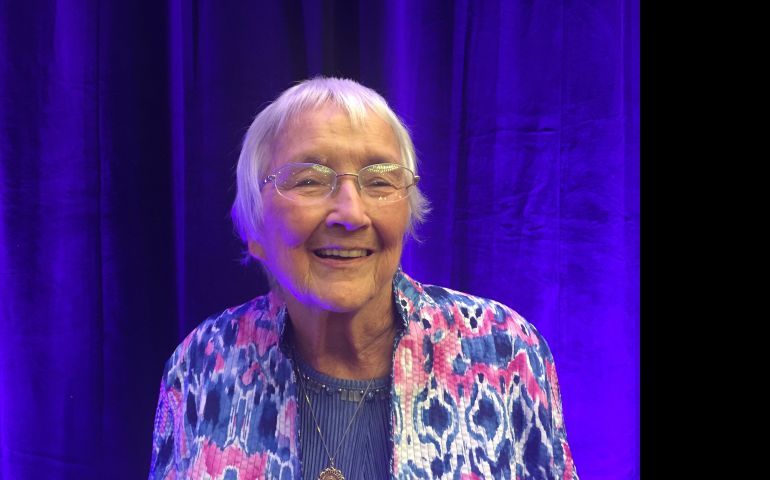 A bright thread runs from Theresa's welcome to Pope John Paul II through the Mercy's medical and political struggles with the Vatican. The doctrinal investigation of the Leadership Conference of Women Religious and the apostolic visitation of active women's religious communities (begun in 2008) are further evidence of ecclesial harassment. Some speculate that both were meant to put the nuns back in their place after the United States' Affordable Care Act passed with the nuns' support and the bishops' opposition. Others think that going after women whose lives are focused on helping those made poor and marginalized, those who are sick or in need of education, was a way to distract from the ensuing, unsavory saga of clergy sexual abuse and coverup.

History will decide. But if the way in which Theresa and her community were treated by clerics who variously refused to meet with them, lied and otherwise pulled rank, there is a certain sordid desperation that is only now coming to light. It is costing the whole church dearly. More analysis of this would have enhanced this book, or, better, will be the subject of future studies. Some readers complain that this volume is overly detailed. I welcome this carefully documented contribution to church history that takes women's actions seriously.

Theresa Kane's story is not over; Sr. Chris Schenk captures the essence in 300 pages. Theresa continues to prod and inspire. In her 2015 speech at the Women's Ordination Worldwide conference in Philadelphia, she sounded an even more confident call. Addressing Pope Francis (in absentia) directly she said: "Only radical (at its roots), gender equality in church and in society will begin to diminish the violence, hatred and other forms of inhumanity to our world today."

Now her concern is not simply with the church, but with the deep impact that religiously sanctioned oppression of women has on the world. War, ecocide, and economic and racial injustice trace their roots to the kind of top-down thinking that is baptized and confirmed by Catholic patriarchal theology. Theresa Kane embodies its antithesis — inclusive, egalitarian, spirit-filled community. She persists. Increasing numbers of people persist with her, in her debt for modeling a way of living. Not all of it easy, particularly in these mean times that Catholics, especially Catholic women, are living.

Read this next: Women in church leadership: 40 years after Sr. Theresa Kane's request to pope