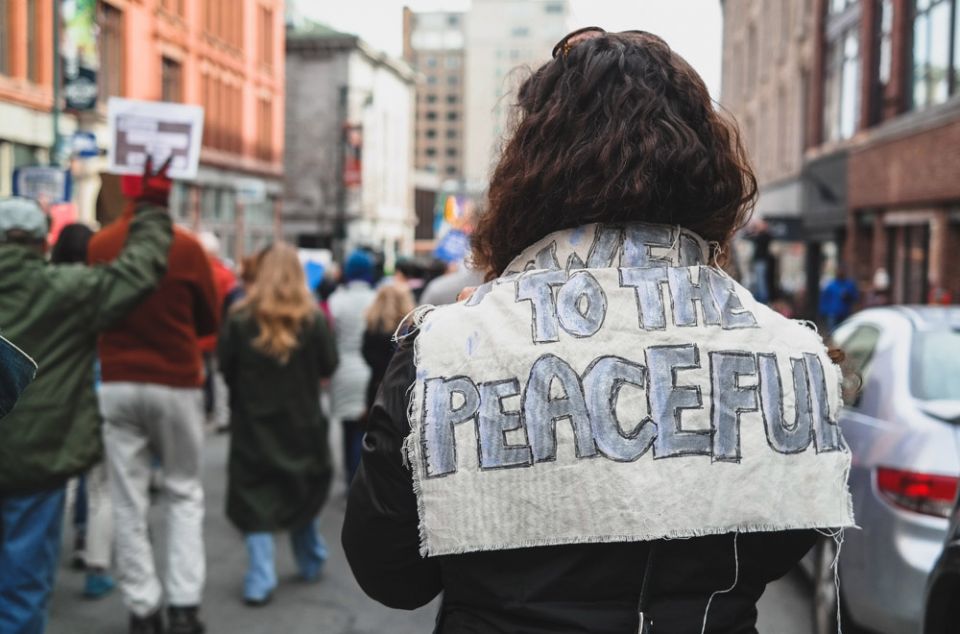 We live in a time of grotesque political toxicity. This toxicity thrives in an authoritarian political culture where the president of the United States exploits people's fears to publicly shame people who legitimately cry out for justice.

Like many others who yearn for a return to truth-telling, fairness and justice, I find myself so disgusted and enraged by the violence of the president and his party that I feel like I could easily burn up or explode. Our fury, however justified, may only consume us if it is not grounded in loving kindness both within ourselves and all of our institutions.

The president mocking Christine Blasey Ford's testimony about her experience of sexual assault is only the latest instance in a long series where the president sounds more like a bully dictator than the leader of a democracy. On Oct. 2, the president shamelessly lured his Southaven, Mississippi, crowd to repeat the uproarious laughter that Ford described as her most haunting memory of the judge assaulting her when they were high school students in 1982.

Martha Beck, herself a survivor of sexual assault, comments that "from schoolyard bullies to genocidal dictators, violent people claim 'self defense,' or 'defense of our way of life' as justification for their actions." She continues by noting that "Stalin, Hitler, and Mao all killed millions to 'defend' against those who they saw as ideological or personal threats."

Indeed, Trump's twisting of truth — his propaganda — appeals to a mythic past of white nationalism that simultaneously exploits self-perceived white victimhood, fits historical patterns of fascism that Jason Stanley's elaborates in his latest book How Fascism Works: The Politics of Us versus Them.

While many have lamented the loss of civility in American politics for several decades, the problem is far worse. Elizabeth Bruenig explains in The Washington Post that the process that led to the likely elevation of Brett Kavanaugh to the Supreme Court is so full of lies that it only exacerbates a cycle of destruction in American politics.

Explaining her vote against cloture and moving Judge Brett Kavanaugh ahead to sit on the U.S. Supreme Court, Sen. Lisa Murkowski said, "We need to have institutions that are viewed as fair and if people who are victims, people who feel that there is no fairness in our system of government, particularly in our courts, then you've gone down a path that is not good and right for this country."

More than anything, I believe, we need the balm of loving kindness. Loving kindness for ourselves and others heals wounds and creates the condition of the possibility of truth-telling, fairness and justice.

While the call to love oneself and others goes to the heart of the Gospel and many faith and moral traditions, I re-learned this central teaching in, perhaps, the most unlikely of places: a hospice partially funded by the National Health Service in the United Kingdom. I say unlikely from the perspective of how government is viewed so negatively in the U.S. American context.

A call for loving kindness may sound naive in the context of a time in which the U.S. President mocks survivors of sexual abuse. As survivor Beck explains, "When I was the one whose name was making news because I had accused someone of sexual assault, I lived in a state of fear so intense I expected my heart to stop beating at any moment."

The only harbor she had against "the worst hurricanes of my own fear" was the Tibetan practice of "lovingkindness." She clarifies how loving kindness is not selfishness. Rather, it is a way to fill oneself with calm, peace and love in the face of public shaming and violence. The point is that if we want authentic social change that the transformation we seek must be grounded in loving kindness in how we live.

Conversely, quoting the poet Jack Gilbert, Beck wisely notices that making "injustice the only measure of our attention is to praise the Devil." Christian, Tibetan and Gandhian practices of nonviolence counter this sinful tendency by beginning with loving kindness.

When I very recently learned the devastating news that my sister was facing the end of her life due to terminal cancer, I wondered about the quality of care she would be receiving in hospice. Even though my parents were privileged to enjoy the best private Catholic nursing care available in the United States, I knew that I had to be especially vigilant at late night and early morning hours when there tended to be gaps in oversight and care.

Royal Trinity Hospice, on lovely Clapham Commons in London, confirmed for me why my sister fell in love with England in college and eventually procured dual U.K. and U.S. citizenship.

The time that I spent with my sister in hospice remains a great blessing. I was refreshed by the presence, attentiveness, compassion and professional care consistently practiced by all nurses and staff throughout the facility. The great depth of their humanity and kindness is a most powerful witness to loving kindness in a world full of fury, anguish, fright and terror.

Even more, it was evident that great thought and care was given to the design of the building and gardens. Upon walking into Royal Trinity Hospice I was surrounded by sunlight beaming from above and both sides of the building.

Perfect for my dear sister, who always insisted on getting outdoors and opening curtains to bask in beams of warmth and light. And, as my sister would say, the gardens are "absolutely divine." Roses, daffodils, narcissi, grape hyacinths, and geraniums were dancing in the wind amidst cherry, pear, and apple trees and a variety of shrubs.

As I met other families in the common areas I was impressed by the diversity of patients who seemed to represent every strata of English society. There was no segregation by ability to pay. I could not help but wonder why U.S. American culture is so critical of systems like the National Health Service that passionately and professionally care for all members of society.

We can live in loving kindness within ourselves and in our institutions. The change we seek for a world of love and justice begins in our daily practice of loving kindness. That is how we may yet make God's kingdom of love a reality "on earth as it is in heaven."

*An earlier version of this story listed an incorrect author.

Commentary | Balm of loving kindness: antidote in a time of fear