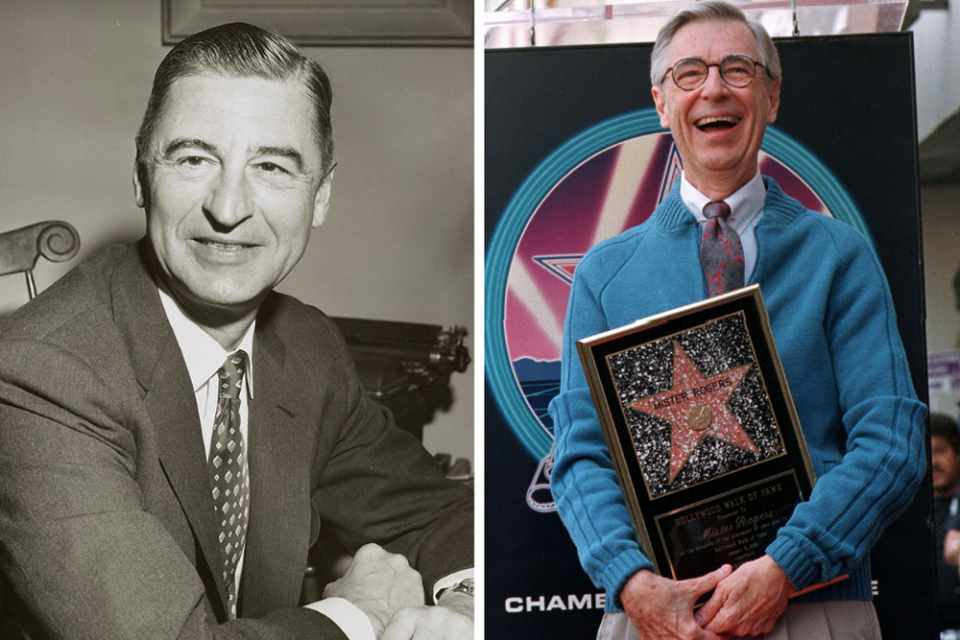 Theodor Geisel, left, in 1957 (Library of Congress/World Telegram & Sun photo/Al Ravenna); Fred Rogers with a plaque he received in 1998 at a ceremony to unveil his star on the Hollywood Walk of Fame (CNS/Reuters) 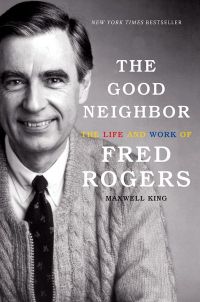 THE GOOD NEIGHBOR: THE LIFE AND WORK OF FRED ROGERS
By Maxwell King
416 pages; Abrams Press
$30.00 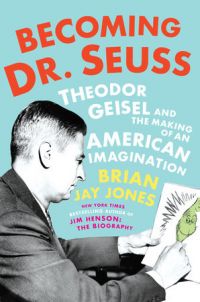 Two recent biographies of Theodor Geisel and Fred Rogers allow us to reflect on the culture of American childhood over the past half century, as well as explore the lives of two very interesting men who did so much to shape that culture. In light of recent treatment of children at our southern border, Brian Jay Jones' Becoming Dr. Seuss: Theodor Geisel and the Making of an American Imagination and Maxwell King's The Good Neighbor: The Life and Work of Fred Rogers remind us that our current president's policies depart from the value of childhood that these two men worked so hard to help create.

Jones' biography of Geisel rests on the fine work of previous biographers and his own research in the papers that Geisel and his colleagues bequeathed to Dartmouth College, Columbia University and the University of California, San Diego. King had less previously published material from which to draw, and he relied extensively on oral histories collected at the Fred Rogers Archives at St. Vincent College in Latrobe, Pennsylvania, where King himself worked briefly. As a result, Jones tells Geisel's life story more robustly and with greater nuance than King can manage for Rogers. Both books contain insights that will surprise readers and offer overall narratives that convey their subjects' deep commitment to children's well-being.

At first glance, Fred Rogers and Theodor Seuss Geisel have very similar biographies. Though they were born two decades apart, both grew up in economically elite families in relatively small towns, attended public school, eschewed athletics, took piano lessons as children, went to Dartmouth College (Rogers later transferred to Rollins College in Winter Park, Florida), started their careers in New York City, exercised tight and precise control over their professional projects, and devoted their adulthoods to creating cultural icons familiar to more than two generations of American children. They are surely among a short list of the most influential shapers of American childhood in the last half century.

But their stories do vary meaningfully. Geisel loved parties until his old age, drank enthusiastically, chain-smoked while he worked, avoided churches, prized wit above all for much of his career, settled in adulthood clear across the country from where he was born and raised, and never had children of his own. Rogers led a more abstemious life, exercised religiously, completed seminary studies, lived and worked a mere 40 miles from his hometown, and helped raise two sons.

The biographers offer no evidence that Rogers and Geisel collaborated, influenced each other, or even ever met, but children who grew up during the 50 years between 1960 and 2010 likely formed their identities and aspirations around the surprisingly similar messages that the two advanced.

Geisel came first. He published his first children's book while Rogers was still a young child. Geisel came from a humorist background and therefore wrote his early books to entertain with wit and whimsy rather than in the pursuit of any ethical or moral theme. He loved adventure and sought to provide some for children. Unmindful of giving offense in his early years, Geisel used ethnically degrading terms and wrote comfortably of worlds populated almost entirely by male characters.

World War II affected Geisel profoundly and steered him toward both a new medium (video) and a warmer embrace of moral considerations. In 1949, he recommended that authors address children's seven needs: the need for security, to belong, to love and be loved, to achieve, to know, for aesthetic satisfaction, and for change. Above all, he insisted, children "want affection," to be loved. A string of books followed that path: Horton Hears a Who, How the Grinch Stole Christmas! and Yertle the Turtle and Other Stories among them.

Given the enduring popularity of fairy tales and the persistent appeal that fantasy literature holds for children, young adults and the fully grown today, it comes as no surprise that Geisel and Rogers entered children's literature and television through the fantasy portal. Geisel's early works stressed fantastical animals and other beings on grand adventures. Rogers took children to the land of "Make-Believe" every day. These abstracted worlds allowed their creators to distill and clarify the messages they wanted to convey.

In his early work, Geisel, writing as Dr. Seuss, sought primarily to amuse children and sell books. Though he always maintained that he wrote in ways that respected children's intelligence and curiosity, he also worried regularly about making enough money to marry and then support comfortably his first wife, Helen Palmer. Toward this end, he took on advertising campaigns for various consumer products, most notably for Flit insecticide and marine products for the Esso Corporation. All the while he aspired to write books that sold well enough to focus full time on that enterprise. He thought that such writing needed to eschew moralizing and pandering.

Rogers never had to worry about money, as he came from substantial wealth. When he wanted to enter the fledgling television industry, his father, a major stockholder in the RCA corporation, arranged for him to get a job playing piano and assisting in NBC productions in New York City. When his parents wanted Rogers and his wife Joanne to move closer to home, his father worked with a friend to establish one of the nation's first public television stations in Pittsburgh, and thereby provide Rogers with a venue for working in children's television.

Freedom from financial concerns allowed Rogers to follow his interests in religion and children's television. He earned a divinity degree from the Pittsburgh Theological Seminary (Presbyterian) and remained throughout his life an active member of Pittsburgh's Sixth Presbyterian Church. All the while he produced what came to be one of the most recognizable children's television shows of the late 20th century. He saw television as his ministerial medium. But he was not narrowly sectarian, and developed particularly close relations with Catholics. He visited regularly at the Benedictine monastery in his hometown of Latrobe, offered the plenary address at the celebration of St. Vincent College's sesquicentennial, lent his name to a center at that college for the study of children and media, and, according to King, received last rights from the archabbot on his deathbed.

He also consulted regularly with leading children's psychologists and worked with a remarkable team at the University of Pittsburgh and the Arsenal Family & Children's Center in Pittsburgh's working class Lawrenceville neighborhood. Dr. Benjamin Spock founded the center and drew such luminaries as Erik Erikson and T. Berry Brazelton to work there. Child psychologist Margaret McFarland directed the center from its opening and Rogers conferred with her on an almost daily basis as he wrote and filmed his show.

Both Geisel and Rogers eventually arrived at the powerful message that each child is unique and worthy of dignity and love. In a period of mass media, Dr. Seuss and Mr. Rogers sought to use their wide grasp to reach each reader or viewer on a personal, individual level. "Shout loud at the top of your voice, 'I AM I!' Dr. Seuss instructed children in his Happy Birthday to You! Mr. Rogers liked each child just the way he or she was. Children to whom Dr. Seuss' books were read and who viewed "Mister Rogers' Neighborhood" on television came away sure of one thing: They mattered. However imperfectly lived out, this message resonated powerfully through American culture in part because it could be found throughout school curricula, religious instruction of youth, and in the homes of the rapidly expanding middle class. But it also depended in no small degree on the diligent work of Theodor Geisel and Fred Rogers.

The nation's representatives at our southern border challenge this cultural consensus powerfully today, as they implement a policy that asserts emphatically that while some children matter, others do not. One is tempted to conclude that they spent too little time reading Dr. Seuss and watching "Mister Rogers' Neighborhood." But the hundreds of protests against these policies highlight the power of the more humane ethos regarding childhood that Americans share more broadly, and offer hope that popular sentiment favors acknowledging each child's essential dignity and will prevail.

A version of this story appeared in the Sept 20-Oct 3, 2019 print issue under the headline: Champions of childhood .