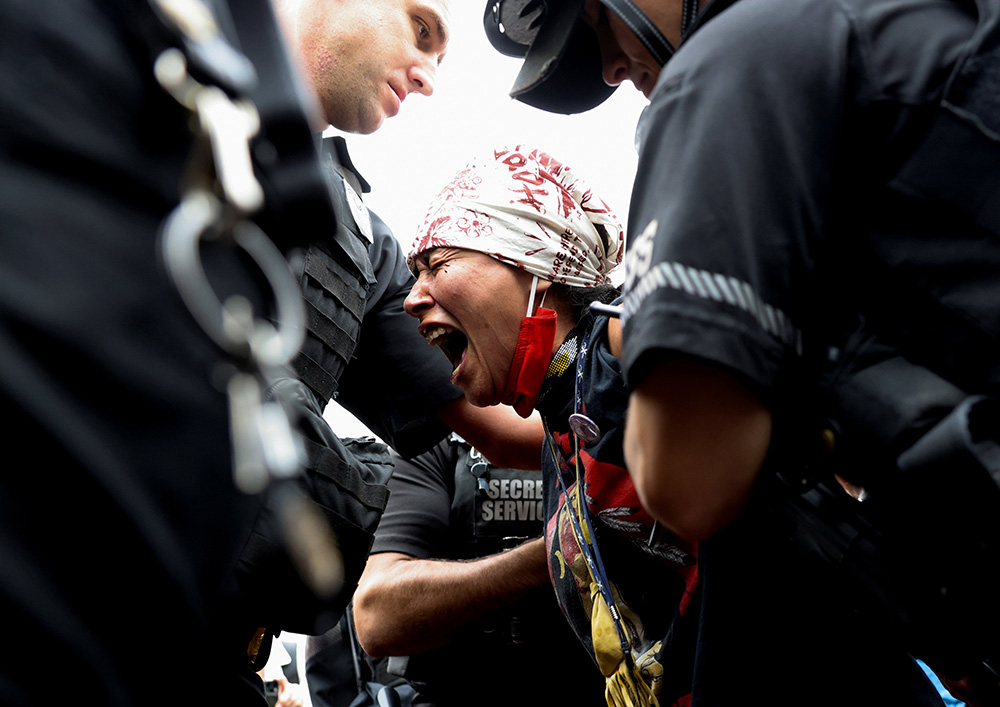 A demonstrator near the White House in Washington is arrested by U.S. Secret Service agents Oct. 11, during a climate change protest to mark Indigenous Peoples Day. (CNS/Reuters/Evelyn Hockstein)

Editor's note: This is the fourth of a series of columns focusing on the Beatitudes.

There's a tendency to wince when people begin to reach back into the deep, dark past to prove a present point. As in, "Grandma always said" or "We're going through the same things Germany did before WWII" or "Jesus taught in the Beatitudes that we need to … whatever." After all, all these things are light years away from what we're dealing with now.

The truth is that attitudes are different than facts. What Grandma said is a fact; what Germany went through is a fact. What Jesus taught us to develop are the attitudes tried and true that it takes to deal well with the facts. The Scriptures call them "beatitudes" meaning attitudes that bring "happiness" or "fortunate attitudes."

Clearly, the Beatitudes shape us as people. They bring us to emotional maturity. They build the kind of self-restraint in us that makes any situation able to be handled.

To be "meek," the first beatitude we considered, calls for quiet, calm, humility and being willing to listen to what's going on around us in periods of chaos or confusion. That kind of restraint is a way to deescalate a situation that is already on the brink of overreaction. It brings sense into a situation before it's too late to say, "I'm sorry," or save a long-time relationship, or make friends, or even resolve some deep-seated differences.

To be "poor of spirit," on the other hand, is to be contented with the basics of life — to make "enoughness" rather than excessiveness — our goal. After all, how many coats can we wear at once? How many cars can we drive at one time? How many times can we exhaust ourselves in body and soul, straining to get more and more and more of what we don't really need, can't use and, too often, won't do a thing to move the needle of our happiness scale much more than it is now? In fact, it may well do to have even less. As the Kenyans say, "Those who have cattle have care." Wealth is its own problem, don't forget.

And yet, today's beatitude is different than those. Very different. Troubling, in fact.

The Beatitudes are clear: What we ourselves do will be what will 'comfort' our mourning.

The third beatitude is "Blessed are those who mourn for they shall be comforted." Or to put it in street language, "Happy are those who can see what's on the verge of being lost — like democracy or civility or equity or justice or equality or the unity in united — and so do something to save it or at least make it better."

But how? The fact is that the greatest part of our present discomfort may well lie in the fact that we are living in a morass of present problems that never seem to go away. And we are surrounded by them.

The cities are crumbling. Prices are getting higher but wages are stalled. The house is like a tomb now that kids have left home and we're feeling isolated. The globe is on the brink — or in the midst — of war everywhere. Women are still underpaid. Children are exploited. Misinformation is rampant. The very health of the environment is under assault.

It all adds up: Whatever happened to peace and quiet, friends and neighbors, democratic values and a sense of progress, a sense of contentment and security?

Yet, unless we allow ourselves to face, to mourn, what is happening to our lives, to our country, to our church, we are going to be left with little worth living for ourselves. Who is going to bring some engrained faith and guidance through the grief if not ourselves?

How can we not mourn when one political party blocks legislation that will be good for the whole country for the purpose of making the other party's president look weak and ineffectual?

How can we not mourn when, in the face of the possible loss of the planet, we watch politicians whittle down legislation that could retool, reeducate, renew the whole economy so that the engines of the past — gas and oil — can win them the congressional seats they're seeking as lifelong benefices. How can we ignore the kind of politics that is willing to surrender the whole world to the losses that come with climate change in the name of money?

And all the while, we sit in the crosshairs of climate change while petty politics play their self-centered little games and our children face the deluge?

No problem is too big to solve if we are resolved to solve it.

From where I stand, the Beatitudes are clear: What we ourselves do will be what will "comfort" our mourning. Once people stand up together and refuse to vote for the kind of "public servants" who obstruct the future while they watch the present being destroyed, the enemies within will disappear.

When "throw the rascals out" becomes the mantra of the mourners in the face of "Make America Greedy Again," we will have begun to begin again. When mourning our situation, grieving our losses, we refuse to accept the ongoing decline, the country will rise again. Together.

Then the next generation, the one now watching the fires and the floods, watching the senseless "War of Congressional Houses Without a Conscience" doing nothing to stop the fires and the floods, may realize that their parents' generation never said a thing about it. Then, when they get that figured out, they may have the sense to destroy the barrels of oil and the ashes of fossil fuels their fathers worshipped as they ate the country up.

It's not only beatitude time, it is confession time, repentance time, beginning-again time.

Otherwise, we shall all mourn. But by then it will be way too late to profit from the wisdom of the past, too late to be comforted ourselves.

Blessed are they who mourn. Now. Before it's too late to change. For they shall be happy.

If they do it.

Read this next: Happy are those who hunger and thirst for righteousness — for they shall boil over
A version of this story appeared in the Jan 21-Feb 3, 2022 print issue under the headline: Blessed are those who mourn now — and do something to make it better.