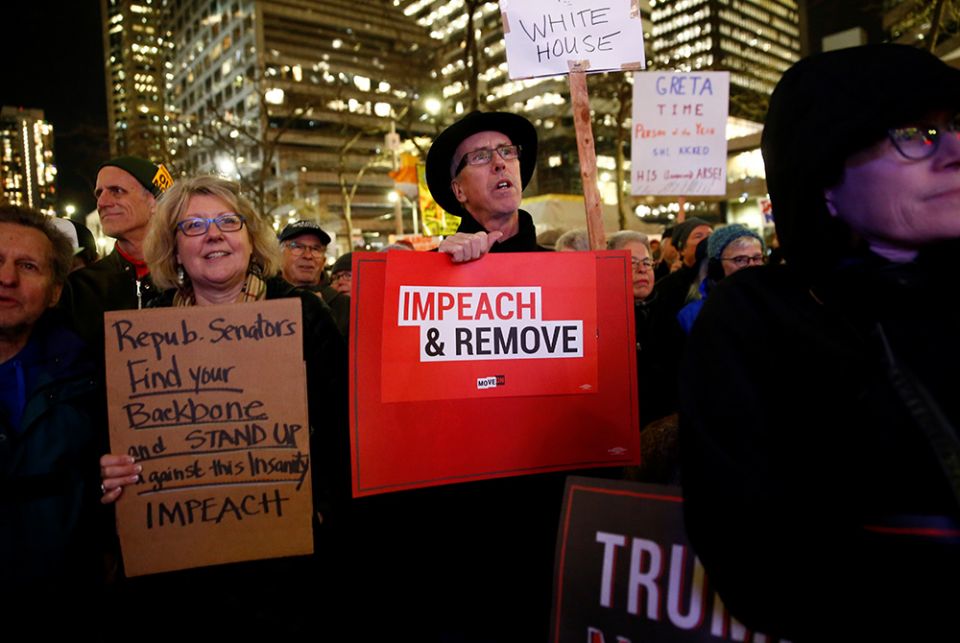 Protesters hold signs calling for the impeachment and removal of U.S. President Donald Trump during a rally outside the federal building in Seattle Dec. 17, 2019. (CNS/Reuters/Lindsey Wasson) 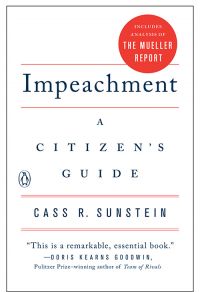 Few developments focus America's collective attention as intensely as the prospect of impeaching and removing the nation's president from office. Perhaps its novelty and gravity explain its power to enthrall. After all, the House of Representatives exercised its power only once in the nation's first two centuries of existence, and the Senate balked at following up Andrew Johnson's impeachment with a conviction and removal from office.

Even the two subsequent impeachments of the last 25 years have (so far) failed to remove the indicted presidents. Given its rarity, proven inability to dislodge sitting presidents, and unlikelihood of removing the current president, it may be surprising to find such a glut of books on the subject in recent years. Such is the nature of Donald Trump's unique approach to public service that so many authors believed it necessary to write these books. 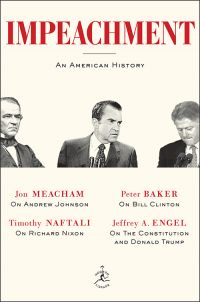 The first question might be why the founders included impeachment and removal in the plan for our government in the first place. Benjamin Franklin suggested that it was preferable to the alternative means of removing a wayward president: assassination. And yet its inclusion has not insulated presidents from this more consequential fate, as four presidents exited via this unconstitutional means.

At its heart, the authors of these books all agree that impeachment is a political rather than a criminal issue. This position stems from their reading of the English precedents, the founders' debates at the constitutional convention, and historical practice. The English Parliament impeached public office holders for transgressions against the sovereign king or queen, and allocated various punishments subsequent to those impeachments — including the death penalty. Frank Bowman's High Crimes and Misdemeanors, easily the most detailed and comprehensive history of impeachment among the books in this review, offers a rich survey of English precedents. The American founders debated whether to include impeachment at all, and then resolved in favor so as to allow Congress to remove federal office holders who betrayed the American sovereign — the people. Impeachment was reserved for those who placed their own interests or those of a foreign nation above the common good. Rep. Adam Schiff, in his preface to The Impeachment Report from the House Intelligence Committee, quotes Alexander Hamilton's understanding that impeachments would be for political offenses, "as they relate chiefly to injuries done immediately to the society itself." 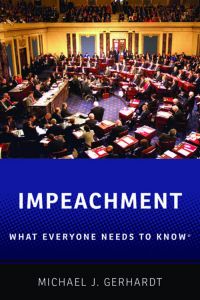 The founders ultimately adopted language that listed three grounds of impeachment: "treason, bribery, or other high crimes and misdemeanors." They did so because early drafts of the Constitution varied the transgressions meriting impeachment before restricting it only to cases of bribery and treason, too narrow a range for George Mason and James Madison's liking. Mason widened the list to three. He and the other founders understood "high crimes and misdemeanors" to mean, according to Bowman, "the kind of conduct Parliament historically found impeachable." Cass Sunstein, in his highly readable and compelling Impeachment: A Citizen's Guide, characterizes this to mean "offenses against the public as such." In the first chapter of Impeachment: An American History, Jeffrey Engel argues that it applied to offenses committed "against the people in republics where the people held sovereignty on their own." These offenses, according to all of the works under review, need not be violations of specific criminal statutes. 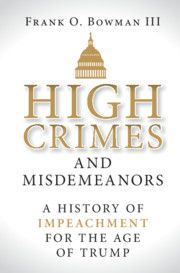 HIGH CRIMES AND MISDEMEANORS: A HISTORY OF IMPEACHMENT FOR THE AGE OF TRUMP
By Frank O. Bowman III
478 pages; Cambridge University Press
$29.95

If the founders understood the meaning of high crimes and misdemeanors clearly, subsequent generations have been less sure about them. In fact, all impeached presidents have used as their first line of defense that they committed no violation of the criminal code. Attempts to understand impeachment in the American context therefore explore the ways that the House of Representatives has pursued it across history. Federal judges as well as presidents and vice presidents can be impeached, and most of the historical cases do involve judges. But only 15 judges have been impeached, and the Senate convicted only eight, just over half. Bowman reviews these cases in his text and he and Sunstein provide helpful summary tables in their respective volumes. The other volumes move first into presidential impeachments. 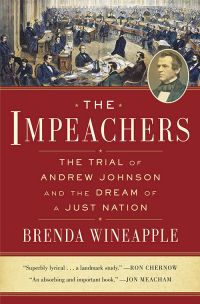 THE IMPEACHERS: THE TRIAL OF ANDREW JOHNSON AND THE DREAM OF A JUST NATION
By Brenda Wineapple
576 pages; Random House
$32.00

Andrew Johnson begins this story when the Republican controlled House impeached the Democratic Johnson in the midst of a fierce and consequential struggle over the meaning of democracy and the fates of over four million newly freed slaves and their descendants. If one includes African Americans among the sovereign people against whom impeachable offenses must be aimed, then a strong argument for impeachment exists. Brenda Wineapple provides a rich narrative of this conflict in The Impeachers: The Trial of Andrew Johnson and the Dream of a Just Nation. In her account, Andrew Johnson appears a lot like Donald Trump in personality and intellectual disposition. Jon Meacham notes that Johnson was likely the most racist president ever to hold office, and Wineapple fleshes out that portrait with ample evidence. But most accounts of Johnson's impeachment, such as Jon Meacham in Impeachment: An American History and Michael Gerhardt in Impeachment: What Everyone Needs to Know see it as too partisan, or as Sunstein characterizes it, "farcical." John F. Kennedy characterized Kansas Sen. Edmund Ross's deciding vote for acquittal as a "profile in courage." Wineapple does not see it as such, and argues that nothing less than the full citizenship of millions of Americans hung in the balance. Moreover, she points out, there is strong evidence that Johnson bribed Ross to acquit, rendering his vote less courageous than venal. 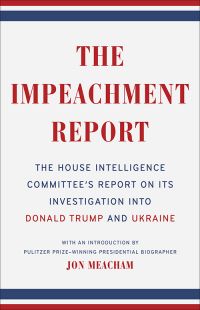 THE IMPEACHMENT REPORT: THE HOUSE INTELLIGENCE COMMITTEE'S REPORT ON ITS INVESTIGATION INTO DONALD TRUMP AND UKRAINE
320 pages; Broadway Books
$12.99

By all accounts, Richard Nixon merited impeachment and conviction. Only his resignation and later pardon spared him a public accounting of his offenses against the American people. In what appears in the context of today's political climate to be extraordinary profiles in courage, Timothy Naftali notes that "a handful of [Republican] elected representatives found that something greater than partisanship could guide them when the fate of the country hung in the balance."

In strong contrast, Bill Clinton's impeachment story offers little evidence of courage on his part or his Republican impeachers. Cass Sunstein concludes that the charges brought against Clinton were "hardly close to the kind of thing that concerned Hamilton, Madison, and their colleagues." But Michael Gerhardt, one of the constitutional scholars whom the Democratic majority called to testify in favor of President Trump's impeachment, is surprisingly sympathetic to these efforts. He concludes his section on Clinton's acquittal in the Senate with the observation that "more than a few scholars and many Americans" believe that the Senate should have convicted and removed Clinton from office and that Democratic senators who failed to vote this way "tarnished" themselves. More than 150 pages later he reveals that he too thinks the Senate should have convicted Clinton. Frank Bowman and Cass Sunstein disagree. They see extreme partisanship at work in the Clinton case, and note the powerful role that party affiliation played in all impeachments. Peter Baker sees the Clinton impeachment as laying in the murky middle between illegitimate and clear cut.

The authors of the books under review came to their projects because Donald Trump challenged longstanding norms guiding presidential behavior—both as a candidate and once in office. But only one work appeared recently enough to address the actions that spurred his actual impeachment and trial before the Senate. Nevertheless, they offer understandings of impeachment that should both trouble and reassure the current president.

Some suggest that President Trump should worry because he clearly acted in ways that spurred the founders to include impeachment and removal from office in the constitution. The Impeachment Report offers rich detail on the specific violations at issue today, especially regarding the abuse of the office for personal gain — pressuring a foreign country to assist Trump in retaining the presidency. But all of the books lay out clearly that the founders feared a person of low virtue ascending to the presidency and leveraging his position to advance his own private interests — or those of a foreign nation — above those of the American people. Frank Bowman concludes that Trump ought to be impeached for the pattern of his conduct prior to the Ukraine scandal. Jeffrey Engel counsels against any such attempt. Michael Gerhardt and Cass Sunstein reach no conclusion.

Yet Trump can likely rest easy because so few representatives and senators through history have crossed party lines to vote against a sitting president's interests. I write this in the midst of the Senate trial, just after the Senate voted to exclude evidence and witness testimony from their proceedings. Though they have not yet done so, it is nearly impossible to imagine that the Senate will not vote to acquit. Trump's conviction would require 20 Republicans to vote against a Republican president at a time when it seems unlikely that even one would do so. Such a vote in Trump's first term, should he win reelection, raises the possibility that he would become the first president to earn impeachment twice.

As impeachment efforts heated up, when a reporter asked Nancy Pelosi if she hated President Trump, she answered, "I don't hate anybody. … I was raised in a Catholic house. We don't hate anybody. Not anybody in the world." She then added that she always prayed for the president, "and I still pray for the president. I pray for the president all the time." The founders predicated the new nation on the virtue that Pelosi expressed in that moment. They presumed that presidents would act as Pelosi testified, with malice toward none and concern for the common good and the national interest. And though they knew that not all his successors would exercise the full measure of George Washington's integrity, they thought impeachment might never be necessary. History has proven otherwise.

Opinion | Books on impeachment may both trouble and reassure President Trump