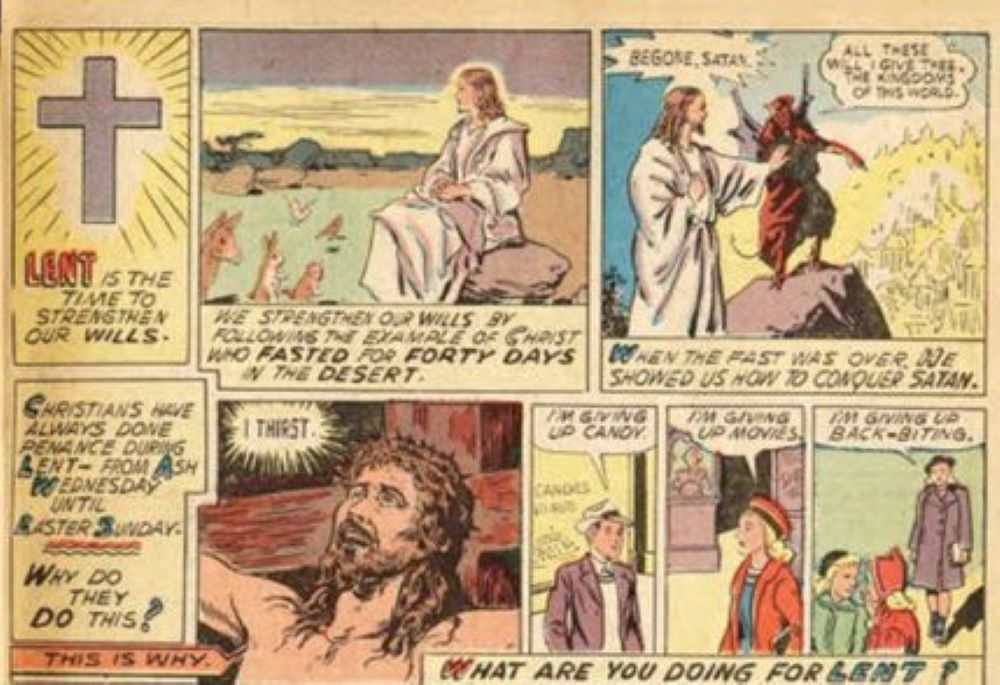 As Lent began in 1946, students in American Catholic schools were treated to a new publication

A comic book called "Treasure Chest of Fun & Fact" extolled the value of Lent, showed how salt was made and detailed the founding of the state Maryland — the most Catholic-friendly of the 13 original colonies. It also told stories of the Robinson family turning their basement into a "rumpus room," Navy salvage diver Skee Barry and Chuck White, who moved with his father to a new town and tried to stay on the straight and narrow.

The end of the issue promised a new comic every two weeks, continuing the serialized stories of the Robinsons, Skee Barry and Chuck White, while delivering other information and helping to keep students on their Lenten path.

"Treasure Chest is not just another substitute for the objectionable comic publication," an editor's note at the end stated. "It stands on its own merits as a quality magazine which children — and adults — will enjoy and profit by." 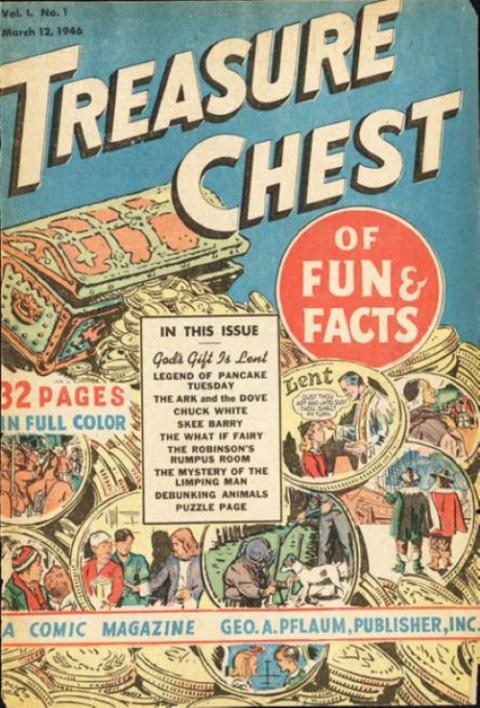 The first issue of "Treasure Chest of Fun & Fact" is dated March 12, 1946, and focuses on Lent. (Courtesy of Catholic University of America Special Collections)

And it filled that role from 1946 to 1972, spanning both of what are regarded as the golden and silver age of American comic books, offering Catholic lessons in a medium that was wildly popular for what was at the time the largest generation of youth in American history.

Every comic hero has an origin story; for "Treasure Chest" that can be traced to two unconnected but equally important events in 1938.

At that time, it was not uncommon for newspaper comic strips to be collected and released in books, but that year marked the introduction of Superman, created by two classmates at Glenville High School in Cleveland. Jerry Siegel and Joe Shuster effectively created the superhero template, which would be duplicated far and wide.

That year also marked the 50th anniversary of the founding of the Catholic University of America in Washington, D.C. To commemorate the anniversary, Pope Pius XI wrote a letter congratulating the college on the milestone while challenging it to develop curriculum for students in Catholic schools advising them on citizenship and democracy.

Even after millions of Catholic immigrants had arrived in America in the late 19th and early 20th century, Catholics were still viewed with some suspicion. A Klux Klan revitalized by anti-immigrant and anti-Catholic sentiment found a place in the Midwest in the 1920s. And in 1928, allegations swirled that Al Smith, the Democratic governor of New York and first Catholic nominee for president, would be a servant not of the people who elected him, but of the pope (again, Pius XI) and the Vatican. 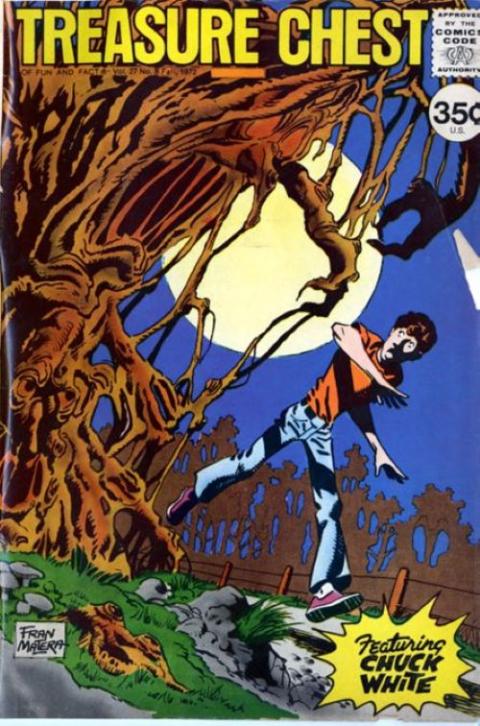 The last issue of "Treasure Chest of Fun & Fact" in fall 1972 included a storyline about the long-running character Chuck White. (Courtesy of Catholic University of America Special Collections)

The Catholic University turned to a well-known publisher: Pflaum, based in Dayton, Ohio. Pflaum published the Messenger series of newsletters for Catholic school students. Plans were to come out with the comic in the early 1940s, but World War II intervened, leading to a paper shortage.

"'Treasure Chest' was intended to be a more wholesome version of that popular cultural artifact,” Mazzenga said. “Pflaum, already a Catholic publisher, was a logical house to publish the comic book, which went to thousands of parochial schools throughout the U.S.”

By the time the comic book finally debuted in 1946, the war had changed what comics were popular. “Superhero comics went into decline,” said Charles Coletta, a professor of popular culture at Bowling Green State University in Ohio. “They seemed like a fad from the World War II era that had run its course. After the war, you start to see most of the titles get canceled or morph into something else: Westerns, military comics, romance comics, humor. Horror comics also became very popular.”

And that became a problem. Psychiatrist Fredric Wertham claimed in the 1950s that all comics were horror comics, and the violence and sexual themes of them promoted juvenile delinquency. Coletta said that comic strips were far more adult-oriented, but because they were in an adult-oriented medium, i.e., newspapers, they were not viewed as a threat like comic books, which were geared toward preteens. 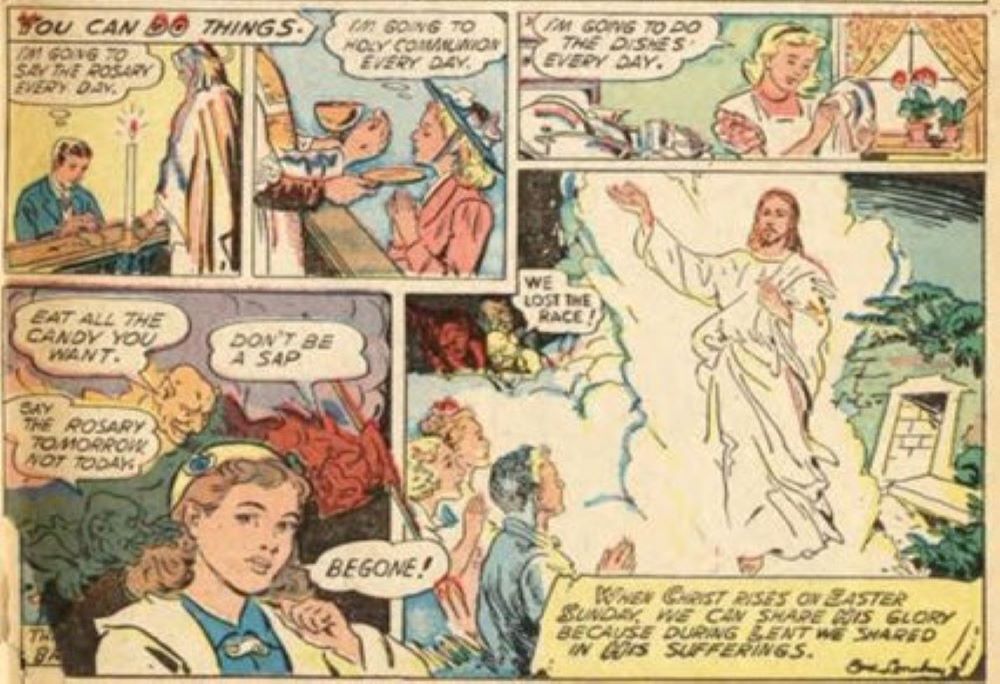 "Treasure Chest" was presented as a wholesome alternative (it was distributed mostly in Catholic schools, so how bad could it be?), with the ongoing saga of Chuck White and other serial fiction, along with stories teaching about Catholic doctrine and famous figures, from Allan Pinkerton to Babe Ruth (who, it should be noted, started on the path to fame and fortune when a monk, Brother Matthias, encouraged him to play baseball while at a Catholic reform school).

The comic was also able to capitalize on the baby boom generation. By 1964, it had a circulation over 400,000, making it the fourth most popular comic book in the United States. That year was also when the comic presented its best-remembered story: The idea of a Black man running for president — in 1976.

But the comics landscape was changing yet again.

DC Comics had reintroduced the Flash in 1954, and superhero comics were coming back into vogue. Meanwhile, at Marvel Comics, impresario Stan Lee was introducing a fleet of younger, more relatable superheroes like Spider-Man, the Fantastic Four and the Incredible Hulk. The books' soap operatic qualities led to them attracting older teens as readers, Coletta said.

Gradually, the baby boomers aged out of comics. Coletta said one result of Wertham's allegations, the Comics Code Authority, [RG1] was that it really "ghettoized" comics as a child's medium. "Treasure Chest" slowly became a relic — even more so, Mazzenga said, after the Second Vatican Council.

"Many Catholic schools closed, the content wasn't as in demand in the post-Vatican II era and school reorganized their curricula to be more in line with public schools, with which they began to compete,” she said.

The comic ceased publication following its fall issue in 1972 — largely dominated by another Chuck White story. But it lives on in library archives, at Catholic University and Bowling Green, as well as with Catholic school students of a certain age (and maybe those who found their parents' stash years later).

A version of this story appeared in the April 1-14, 2022 print issue under the headline: For decades, a Catholic comic book taught young people about church.