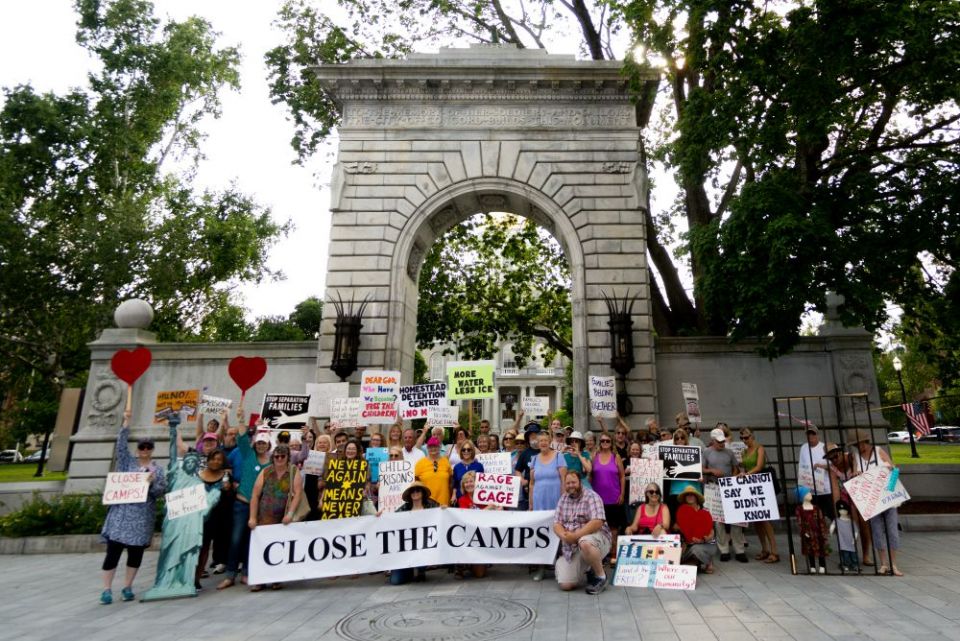 The Trump administration presents an unprecedented, existential threat to U.S. democracy and, indeed, the world. While many are organizing for change in the 2020 election, that may be too late. We the people must address this threat with massive sustained civil disobedience.

While I applaud the rejection of nationalism and violence articulated by Ignatian Network leaders and theologians, we need to put words into action. It is time to embody Barmen Today: A Contemporary Contemplative Declaration, which echoes the historic 1934 declaration rejecting the tyranny and evil of Nazism.

I believe we need to understand this existential threat in a larger historical context that goes to the root of the violent lie of anti-black white supremacy that we perpetuate in ourselves and society. We need to heed the prophetic vision of Nikole Hannah-Jones who conceived of The New York Times' 1619 Project to explore the enduring legacy of slavery.

Upon the 400th anniversary of the arrival of slaves in Virginia, unless we understand how the legacy of slavery endures in this land, we will not realize the true meaning of the opening lines of the Declaration of Independence. Hannah-Jones contends that we will not fulfill the reality that all people are created equal "until we confront our sins and make them right."

Read this next: Editorial: 'The 1619 Project' is landmark truth telling

It is time to confront our sins of violent white supremacy and make them right through sustained, massive civil disobedience. Our national sins are inextricably linked to, and exacerbated by, the existential threat we face today.

As Harvard University political scientists Steven Levitsky and Daniel Ziblatt demonstrate in their comparative analysis of global authoritarianism in How Democracies Die, the warning signs of an existential threat to the republic are all around us.

An ecosystem of deceitful authoritarianism, white Christian nationalism and corruption erode the conditions of the possibility of free and fair elections, government for the common good, creating a green economy, and caring for the most vulnerable among us.

The warnings begin at the rejection of democratic rules and norms, such as the president's welcoming of Russian meddling in the 2016 and 2020 elections, threats to human rights and the International Criminal Court, obstruction of justice detailed in Volume II of the Mueller report and the administration's uniform obstruction of Congress performing its constitutional duties.

Far from being devoted to the rule of law, Citizens for Responsibility and Ethics in Washington (CREW) reports over 2,300 conflicts of interest in the current presidential administration. The extent of Donald Trump's personal financial gain through the office of the president obliterates any credible sense of upholding the emoluments clauses of the U.S. Constitution.

Second, the president's consistent attacks on the legitimacy of political opponents, including attacks on former President Barack Obama, Secretary of State Hillary Clinton and current congressional members and their constituencies, undermine democratic opposition and erode conditions of the possibility of realizing universal justice and equality.

Third, contrary to the president's delusion that he brings people together, he has consistently condoned violence against political opponents and people of color. A nationwide review by ABC News identified at least 36 criminal cases where Trump "was invoked in direct connection with violent acts, threats of violence, or allegations of assault."

A litany of threats to basic civil liberties marks the fourth assault on our democracy. These include the Muslim ban, the denial of due process to Americans and newcomers facing deportation, seizing unilateral power to detain people indefinitely, separation of families and child detention, and attacks on freedom of speech by the press and political opponents.

The deeper malaise is not only because these are assaults on democracy abetted by a sycophantic GOP and an obstructionist U.S. Senate majority leader, but also because they are fueled by a new conservatism rooted in white Christian nationalism.

Sadly, not unlike prominent Christian thinkers and faith communities that supported National Socialism in Germany in the 1930s, too many Christian churches remain silent in the face of violent attacks on people of color, Jews, Muslims, students and LGBTQ brothers and sisters.

In the spirit of the prophetic witness of the original signatories of the Barmen Declaration, Barmen Today expresses "a resolute commitment to equality, dignity, and opportunity for each and every living being, no exceptions, offered in love and belief that we humans are capable of more than we've achieved so far."

History is on our side. In their comprehensive comparative study of violent and nonviolent conflict between 1900 and 2006, Erica Chenoweth and Maria J. Stephan find that "campaigns of nonviolent resistance were more than twice as effective as their violent counterparts." 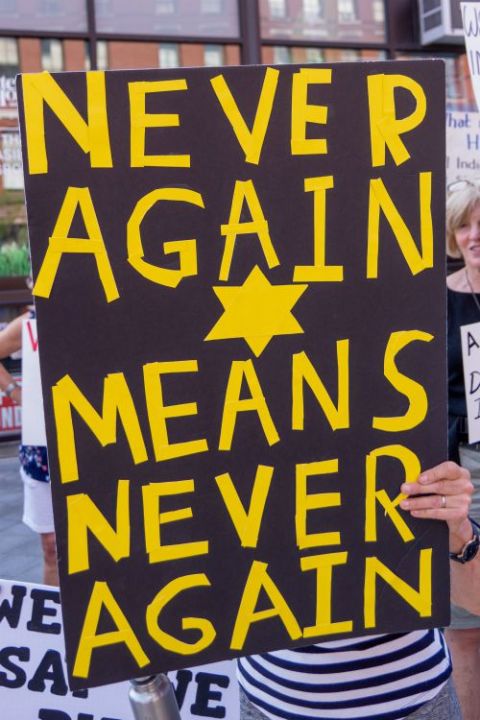 People of all faiths and no faith are enacting diverse methods of civil resistance and social change here in the U.S., including a successful campaign in Puerto Rico. These include Catholics Take Action for Immigrant Children, Jews "sounding the alarm that Never Again is now" through the Never Again Action movement, and SOSAmerica2019 whose mission "is to unify all non-violent, non-destructive, and peaceful protests across the nation" who share the goals of impeaching Trump, securing our elections, and procuring permanent protections for immigrants and asylum seekers.

As NCR reports, Cardinal Joseph Tobin of Newark, New Jersey, blessed, prayed for and supported a group of Catholics who blocked a crosswalk, arranging themselves in the shape of a cross in front of the Immigration and Customs Enforcement on Sept. 4. About 400 people participated in the event as Tobin led them in a chant of "stop the inhumanity."

At the end of the opening live program for the 1619 Project, Vy Higginsen's Sing Harlem Choir sang a body and soul-shaking performance of "Go Down Moses" (2:07:00). Do we hear and feel their liberation song crying out from every corner of this land?

We the people have the collective power to match the sustained acts of civil disobedience in Hong Kong, Russia, Algeria, London and Glasgow. It is time to demand dignity, equality and justice for all. We the people must act together now for democracy and human dignity.