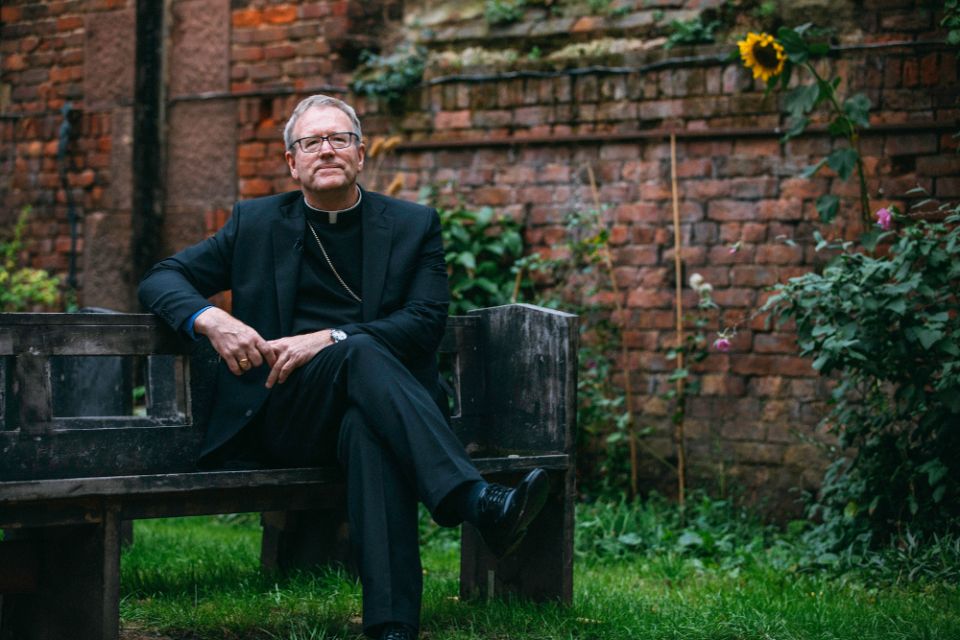 I confess I am at a loss to understand why people hold Bishop Robert Barron in such high esteem. The auxiliary bishop of Los Angeles and chair of the Committee on Evangelization and Catechesis gave one of the more bizarre speeches at Tuesday's public session, and bizarre in precisely the kind of Americanist way that makes me so suspicious of Barron and his influence.

Barron spoke about the change to the U.S. catechism regarding the death penalty so that it will remain in accord with the universal catechism. Pope Francis built upon the change in the church's teaching begun by Pope John Paul II: The latter said the moral justification for capital punishment was virtually non-existent, and Francis removed the "virtually." I was struck by the antiseptic way Barron discussed the changes. He certainly did not sound like he was endorsing the pope's change, and he several times downplayed the significance of the proposal, that they were only tasked with devising English language that cohered with the original. To be clear, at no point did Barron say, as some conservatives have, that Francis was wrong to make this change. He simply seemed extremely unenthusiastic.

Barron's enthusiasm returned momentarily when he spoke to the bishops about reaching out to the "nones," those who, when asked their religious affiliation, reply, "none." I hope you will have read my colleague Soli Salgado's story about the Nuns and Nones published on Monday. It was hard not to read that story and have the words "authentic" and "Gospel" rise up in one's thoughts. Those were not the words I found myself thinking about while listening to Barron.

First, he did not once — not once — acknowledge that the bishops' failure to stop child rape has been the single most significant reason many Catholics have become nones. He said that there is a vast library of research about who is leaving the church and why, and that the No. 1 reason is that they no longer believe. He distinguished this from no longer believing the church's moral teachings. But, he did not probe: Might the lousy witness of so many priests and bishops be the problem? No, he suggested the lack of faith was "the bitter fruit of the dumbing down of our faith." A friend likes to say that John Paul II was a Platonist, that for him if you believed rightly you were the virtuous person. It was this that allowed him to remain blind to the inadequacies and moral failures of many of his collaborators: They believed the right things.

I am not sure if that same Platonist designation could be applied to Barron. It might be that he is just a huckster setting out the rationale to buy his videos and books and whatever else he is selling these days. It seems like every day Word on Fire is trying to separate me from my money. Call me dumbed down, but it is this kind of evangelizing approach that turns off a lot of people, people for whom the witness of Christians so compromises the Christian narrative, that they cease to believe. It is distinctly American, with a whiff of Elmer Gantry about it.

Barron went on to speak about relativism and anytime someone bemoans relativism and does not mention materialism, you know you are in the presence of a culture warrior. He went on to speak about what he calls the "cult of self-invention." He told his brother bishops that he sees this cult all over social media, that it has its source in Nietzsche and Sartre and Foucault, and it has now trickled down to popular culture. Trickle down existentialism. Maybe. And if the diagnosis is correct? Just delve into Word on Fire's new "Pivotal Players" series that highlights the work of key Christian saints and thinkers. Finally he mentioned that for many young Catholics, the church's teaching on sexuality is a stumbling block but, again, no mention that the bishops themselves, and their mishandling of sex abuse, might have contributed to someone's concluding that the church's teachings were a lie.

When Barron turned his attention to signs of hope, the first item was that most young nones are not hostile to religion, they are merely indifferent. Why is that hopeful? For someone who claims to have spent a lot of time around young people, I think Barron misses the mark here. I find indifference far more difficult to overcome than hostility. You can talk with someone who violently disagrees with you, but with someone who just doesn't care, they tend not to listen. In both cases, nothing Barron said yesterday had half as much insight and evangelical wisdom as Pope Paul VI did when he said in Evangelii Nuntiandi #41: "Modern man listens more willingly to witnesses than to teachers, and if he does listen to teachers, it is because they are witnesses."

Then things got really weird. Barron started talking about Jordan Peterson, the Canadian prophet of machismo whom Dorian Lynskey at the Guardian exposed as man who swims in, or damned close to, conspiracy theories and faux facts. He likes to rant and his preferred topic for ranting is human sexuality. I share his disgust at the culture of political correctness, a point of view shared by something like 80 percent of people. But, his interviews and speeches are a little too slick, a little too packaged, ultimately a little too superficial. Barron sees him as something of a kindred spirit. In this, I think Barron is profoundly correct. That is not a compliment.

Barron is a master at apologetics, but apologetics is not evangelization and, in fact, to the degree the Catholic Church highlights his brand of apologetics, I will predict our efforts at evangelization will be stillborn. He turns off as many people as he attracts, and I suspect the people he attracts are not nones but the children of fervent, conservative parents who are trying to find their way in life and incline toward preserving the certainties with which they were raised in a social media culture. I find his embrace of Peterson as frightening as I find his evangelizing proposals thin and counter-productive or, as Massimo Faggioli tweeted at the conclusion of the bishop's speech: "You are Peter(son) and on this I will build my social media Church." Someone replied, "On this Crock."

Column | Barron's idea of evangelization to 'nones' misses the mark