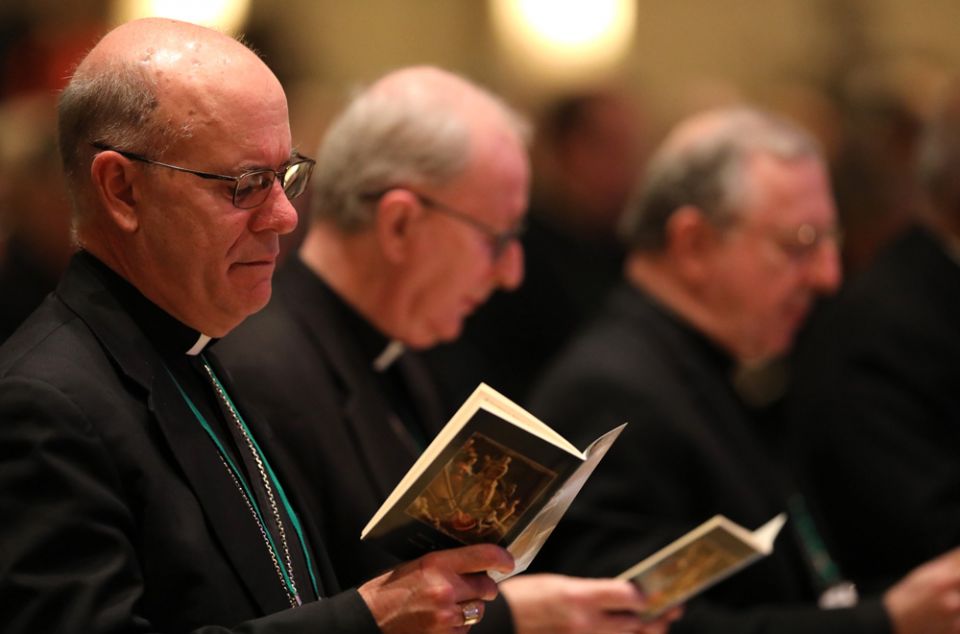 The plenary meeting of the Unites States Conference of Catholic Bishops opened with a bombshell. Cardinal Daniel DiNardo, president of the conference, announced that the Holy See had insisted the U.S. bishops not vote on any concrete action items regarding the clergy sex abuse crisis, pending the February meeting of the presidents of all episcopal conferences that Pope Francis has announced. DiNardo said he only learned last night of the Vatican's decision.

What is going on? People were whispering that the pope should not have intervened, certainly not at such a late date. Is this a case of Rome not grasping the situation in the U.S. or, more worrisome, that Rome still doesn't grasp the enormity of the sex abuse mess? Obviously, the surprise evidenced by DiNardo shows the lack of healthy and regular communication between the leadership of the conference and the pope. Was Cupich trying to put lipstick on a pig? What is really at work here?

We do not know for sure. The pope doesn't talk in his sleep and they don't let us listen at the door if he did. But, the obvious place to start finding an answer came in the address delivered by Archbishop Christophe Pierre, the apostolic nuncio, immediately following the announcement. He did something too few bishops and other commentators have done, or even sought to do, this year: He placed the sex abuse crisis in the broader ecclesiological context. He began by saying:

Actually, the events of this past year, which we have lived and continue to experience, have been both challenging and sobering. With humility and apostolic courage, we must accept our responsibility as spiritual fathers, facing reality with the grace that comes from the Lord. The church is always in need of renewal for the sake of her saving mission of mediating the presence of Christ in the world and this is impossible unless we rebuild trust among the People of God, a task, which, looking to the future, demands time, effort, sacrifice and, most of all, true repentance and reform on our part.

"Our responsibility." "Impossible unless we rebuild trust." "True repentance and reform." He went on to quote from Pope Francis' programmatic apostolic exhortation, Evangelii Gaudium: "What makes obsolete structures pass away, what leads to a change of heart in Christians, is precisely missionary spirit."

The U.S. bishops' conference proposals were too narrowly focused on procedures and policies which might help police the crime of sex abuse but they did not get to the root of the problem, the clerical culture that led bishops to think more about their own reputations than about the welfare of children exposed to sexual predators.

As I noted this morning, there are two meta-narratives competing to become the overarching frame for the bishops' response to the sex abuse mess, the "blame the gays" narrative we saw at First Things and on EWTN in recent weeks, or the clerical culture narrative. Pierre clearly applied the latter:

We cry for the injustices perpetrated upon victims of abuse. We vow to fight a clerical culture that tolerates the abuse of authority. When abuse occurs, it is our sin and we must take it as such. These are not the sins of the media or the products of vast conspiracies. These are things we must recognize and fix. Our Holy Father has said it must end, and it must — not simply because he has said it, but because each of us in our hearts know that this is the only right thing to do.

He did not "blame the gays." He did not suggest that a failure to clearly articulate the church's sexual ethics was the problem. He did not echo the complaints and concerns, still less the technocratic and puritanical solutions, discussed at the conference on "Authentic Reform," that my colleague Heidi Schlumpf reported on. The problem is "a clerical culture that tolerates the abuse of authority." Punto.

And, in contrast to those who minimize the bond among bishops, and hide behind the canonical fact that the bishops' conference has no legal authority over individual bishops, Pierre delivered a clear rebuke: "If we are together, in real hierarchical communion — hierarchical communion that permeates our hearts and are not merely words — we become the visible sign of peace, unity, and love, a sign of true synodality."

Related: Vatican's delay of US bishops' abuse measures leaves even some prelates confused

DiNardo seemed irritated that the pope acted at such a late date, on the eve of the plenary. Indeed he did. But, the bishops' conference only distributed their proposals last week, so how was the pope to act sooner?

The stakes for the February meeting have been raised. The bishops will now discuss what message they wish to have DiNardo convey at that meeting. People can complain that the bishops needed to do something this week, but if the problem is clerical culture, no one decision or set of decisions will remedy that problem. The bruised and bloodied body of Christ must hang on this particular cross of misguided episcopal leadership for awhile. Conversions usually do not happen in a moment. Many of our bishops have not ever been on the road to Damascus, only on the road to irrelevance and self-reference. They have not fallen from their horse, they have fallen from their pedestals, and not a moment too soon.

I am betting Francis grasps this, or most of it. He sees how the U.S. bishops have been corrupted by money, not in a petty way, but in a more troubling way, in which they are selected for leadership of the Christian community in large part because of their ability to raise money so as to preserve the institution and its immense, suffocating infrastructure, instead of for their missionary zeal. Those of us who hope the church can rise from its current ashes and sackcloth must also hope the pope understands how fed up the people of God are with this hierarchy and how confronting the negligence of bishops is for many of us a threshold concern: If he does not get this right in February, then people will no longer care to belong to this church.

The bombshell certainly shook up the meeting. But, before accepting the narrative that will soon be placed upon it by the media who hate the pope, let's remember this: Nothing would more surely impede the genuine conversion and reform that is needed than a fake effort at reform, one that did no more than enact a new procedure there, establish a new commission here. Sixteen years ago, at Dallas, the bishops enacted the procedures and policies that have contributed to the drastic decline in incidences of clergy sex abuse. Yet, the clerical culture persists and, like a petri dish, can receive a different strain of malignancy. Changing that culture will take more than a week, more than a few votes, more than some mere procedural change. And, Francis has been confronting that clerical culture and urging radical change since his election! To hear his opponents complain now is rich in hypocrisy.