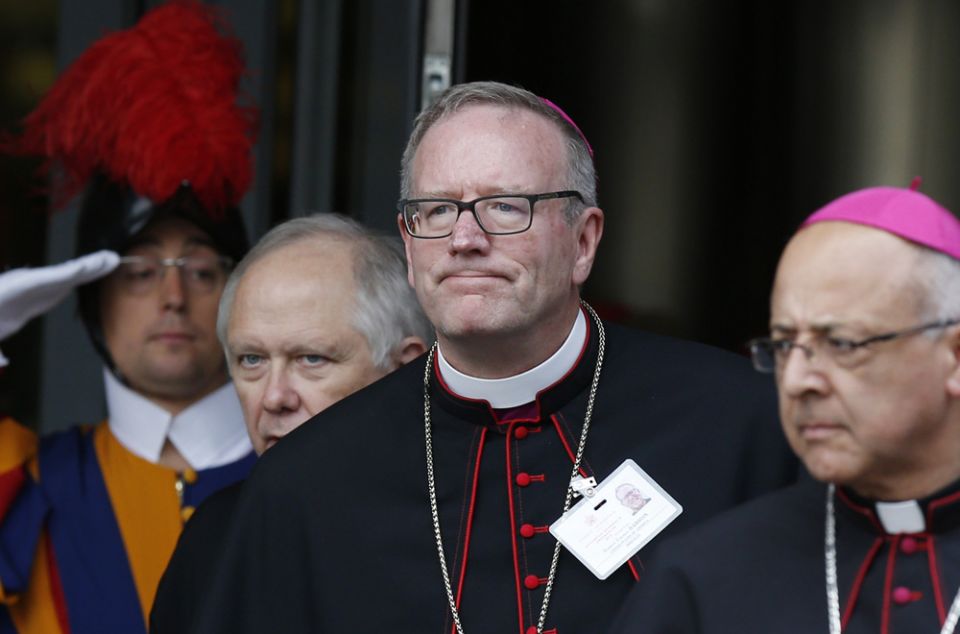 Los Angeles Auxiliary Bishop Robert Barron leaves a session of the Synod of Bishops on young people, the faith and vocational discernment at the Vatican Oct. 5. (CNS/Paul Haring)

"He might not look it, but Bishop Robert Barron is a social-media superstar," opened a recent, gushing Wall Street Journal profile of Los Angeles' most prominent auxiliary bishop. The article noted Barron has 1.6 million Facebook fans and 130,000 followers on Twitter, and his videos on YouTube have been viewed 34 million times.

I am not among the fans. Earlier this year, I criticized a talk Barron gave at Notre Dame. When he talks about evangelizing others, it always sounds very manipulative, it is always a one-way street in which he leads and others follow. And, I recall Grant Gallicho at Commonweal criticizing then-Fr. Barron, who was the rector at Mundelein seminary at the time, for his tendentious characterization of an article by Cathleen Kaveny.

In the Wall Street Journal piece, the bishop notes that when he was ordained in 1986, if he wanted to reach a wider audience, the only real venues were America, Commonweal and NCR. "All three were very left-leaning," he opines, "which meant that you had to write in a way that pleased the editors of those journals." I do not know what his experience was, but I worked at America for a couple of years and at NCR for eight, and I have never experienced the implied self-censorship Barron claims he felt necessary. In any event, he has moved on. Today, "just on my YouTube page, I've got more subscribers than those three combined," Barron gloats.

There is something crass here, crass in a very American way. The bishop is touting the size of his audience as evidence of … what? Of the editors at the country's leading Catholic journals having failed to appreciate his brilliance 30 years ago? Of his being blessed by God? Jesus started with only twelve subscribers, I mean apostles, and he died on a cross. Is "success" the way The Wall Street Journal measures success an appropriate criterion for someone entrusted with the Gospel message? I suspect that many secular news outlets have bigger numbers than Barron, and I would bet good money that there are porno sites that beat both Barron and the news.

Pope Francis, speaking in Paraguay in 2015 said, "How many times do we see evangelization as involving any number of strategies, tactics, maneuvers, techniques, as if we could convert people on the basis of our own arguments. Today the Lord says to us quite clearly: in the mentality of the Gospel, you do not convince people with arguments, strategies or tactics." Austen Ivereigh, commenting on the pope's remarks, said, "This Pelagianism of methods — evinced in a certain triumphalism in some apologetics — is one obstacle to evangelizing." I couldn't agree more. I am sure that Barron's apologetical style appeals to a certain kind of person, but I think it repels as many or more than it attracts.

Some people may rejoice that at least one bishop is turning to social media, but I wonder how other bishops feel about it. Should an auxiliary in another diocese decide how to evangelize in every diocese? Even if his methods do not really resemble the approach the pope is advocating? The internet allows one media-savvy bishop to cross canonical boundaries, but is it a good thing when one especially conservative bishop, and not even an ordinary but an auxiliary, exercise such overweening influence?

How, some might ask, is this any different from what another auxiliary bishop, Fulton Sheen, did for television? He, also, turned to a new communications' medium to spread the Gospel and did so in ways other bishops could not successfully do. I admit the similarities but the essential difference is that in the 1950s most Catholics had a much thicker identity, they were still more likely to organize much of their social life around the life of their parish, their kids were more likely to attend Catholic schools, etc. Ever since we all started bowling alone, and became mesmerized by our thumb things, aka smartphones, those bonds are more tenuous. A prominent, internet-savvy cleric can have much greater influence today than Sheen did in his.

My concerns about Barron go deeper than whether or not his apologetics are a help or a hindrance to evangelization. There is a grandiosity to his productions that is unseemly in a cleric. Check out this tweet and video he published this autumn. He wants to turn his media ministry into a "movement." Or, compare the opening of this video from his series "Catholicism," the sweeping camera views and orchestral flourishes, with the opening scene that accompanied the series "Dynasty." You half expect Linda Evans to walk down a staircase at the Vatican, or Barron to be seated at a boardroom table with John Forsythe.

My concerns go deeper still. The day after Thanksgiving is now called "Black Friday" and, in the ambient culture it is the day when otherwise sane people line up in the middle of the night outside certain retailers to be first in line to take advantage of certain sales. One prelate, who is more attuned to Pope Francis' vision than most American bishops, calls it "the Solemnity of Unbridled Capitalism." Bishop Barron frequently bemoans the secular culture of the day, and highlights the need to differentiate ourselves from it if we are to achieve the kind of Catholic identity he commends.

Why then did his Word on Fire Catholic Ministries bombard my email box with solicitations? "See Our 8 Special Black Friday Deals" was the first email header I got. The second advertised "BLACK FRIDAY: Get 20% off Sitewide & FREE U.S. Shipping on select deals!" The next day, another email: "These 8 Black Friday deals have been extended." And, then, it was time for Cyber Monday! Hey, Bishop Barron. Here is how I avoid the secularism of the culture during the holiday season: I refuse to do any shopping in Advent except for food and medicines. You and your Word on Fire ministry should try it, rather than capitulate to the culture in such an obvious manner. It's one way, there are others, you can put Christ back into Christmas. But jumping on the Black Friday bandwagon is unseemly.

Which leads to my final concern with Barron's Word on Fire ministry: What's up with the bodybuilders? Earlier this year, Barron launched the "Word on Fire Institute," and named Jared Zimmerer as its executive director. Zimmerer has been a competitive bodybuilder who became a catechist at his Texas parish. Earlier this year, I linked to a bizarre interview he did with John Sablan in which they discuss masculinity and Christ in ways that strike me as bizarre. Has anyone really suggested that, as a Catholic man, you can't go to a gym, or practice martial arts or be confident, or are these two men worried about emasculation really just beating up on straw men?

But, hey, we should all have friendships with a wide range of people, and in an appearance on "The Kyle Heimann Show," Zimmerer explains how he came to Barron's attention.

Then came Bodybuilder #2. During the synod in Rome, at which Barron was an attendee, he was accompanied by Joseph Gloor, "an international fitness spokesmodel" now serving as a producer for Word on Fire Catholic Ministries. Gloor took to the streets to conduct interviews. In the first one I saw, Gloor goes up to people in the Piazza Navona and asks them, "What is God?" and related questions. I continued watching until he thrust his microphone into the face of a woman wearing a hijab and asked her if she was Catholic. So, he wasn't hired for his cultural sensitivity or theological acumen. The comment section to the video demonstrates I was not alone in thinking this was all a bit strange.

Word from Rome - Youth Interviews #1 - What Is God?

Again, let me repeat: In a culture that is over-homogenized, I delight in weirdness and oddity, but this is just a bit too strange. Whatever you think of the bodybuilding lifestyle, its goal is to perfect the way one looks, which is not the usual stuff of spirituality. In addition to being a lifestyle, the fitness culture is also an industry: People make money building those gyms and selling those protein shakes. The iconography of an idealized male physique has become a moneymaker.

Barron may not remember that it was Mae West who introduced bodybuilders into her cabaret acts. Those acts have become camp classics, but they were not when first performed. When West sang "I'm in the Mood for Love" and wrapped her boa around the men's biceps, she was evoking sex appeal. Frankie Avalon and Annette Funicello's 1964 movie "Muscle Beach Party" played to the caricature of bodybuilders as not very intelligent jocks, but also starred Don Rickles as the businessman trying to profit off the mystique of the men's muscled bodies. Both West and the Don Rickles character, happily named Jack Fanny, placed these hulking weightlifters in sexualized roles, at least inviting concerns related to the Sixth Commandment. And, by the time West sings "Happy Birthday 21" in the 1978 movie "Sextette," the sexual innuendo is aggressive and the campiness complete.

Most people have never given a thought to the early roots of the bodybuilding subculture nor how it entered the mainstream, but for a bishop whose calling card is media savvy, these cultural roots should invite reflection. Besides, whatever one thinks of threats to the Sixth Commandment, a concern for the First should worry a bishop. To what extent has the "fitness lifestyle" become a competitor to a Christian vision of the good life? Some Sundays, there are as many cars parked outside the local gym as there are parked outside the local church.

The interest in bodybuilding culture, like the willingness to join the Black Friday sale-a-palooza and the grandiosity of his documentaries' visual tableaux, is evidence of this disturbing approach to evangelization that Bishop Barron has adopted: He complains the culture is too secular, and then picks up on some of the most obvious vehicles of secularism and adopts them for his own ends. It strikes me as obviously manipulative, an example of what the pope condemned: "strategies, tactics, maneuvers, techniques, as if we could convert people on the basis of our own arguments." I think the bishop fails to differentiate between engaging the culture and complicity with the culture. In this great free country of ours, he can pursue whatever strategies he wants, but Bishop Barron is not entirely free. He is a man under obedience. Someone in authority should rein him in.