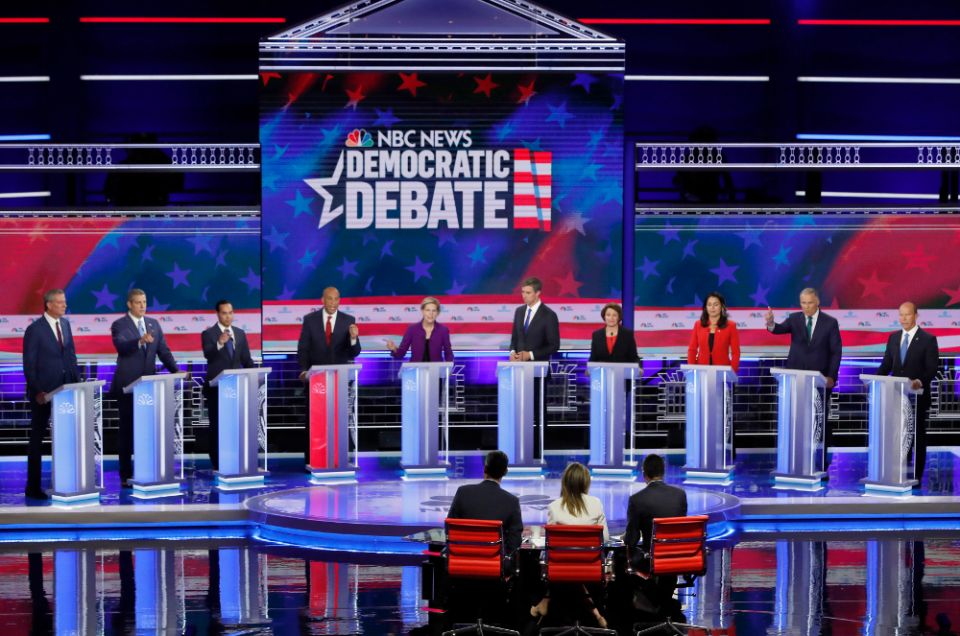 Last night's Democratic presidential debate was a good mix of the candidates drawing distinctions between them as a group and President Donald Trump, and drawing distinctions amongst themselves. The biggest winner really was the Democratic Party as a whole: Almost all the candidates delivered their best performances to date, they were in command of the issues and the contrast with the incumbent president was as stark as it could be.

As always, the results are measured against the expectations, which were high, but vastly different, for the candidates.

Former Vice President Joe Biden had a weak first debate and much improved second one. His message is not well suited for the debate stage: Steady as she goes, let's get back to the way things were before Trump became president, moderation is the key, I am flanked by two extremists who happen to be really liked by the party, and polls say I have the best shot at beating the incumbent. Last night, he had a few moments when he was unsteady, and his words got all messed up. Other times he seemed perfectly capable of carrying on the legacy of Barack Obama. Especially in his closing statement, Biden reminded us all why he is the object of such affection, putting professional challenges in their proper, human context, and oozing empathy with the struggles of average Americans.

Sen. Elizabeth Warren was widely seen as the winner of the first debates, and she is the only candidate who has continued to increase her poll numbers consistently. Her job was to fend off attacks as they came, reiterate the message that has gotten her into the top tier of candidates, and speak to the hearts of the party's voters. There were large segments of the debate when she seemed to disappear but that was because Sen. Bernie Sanders was more combative and, consequently, took more of the incoming attacks. Her other obvious strength is her ability to take any question and refer back to her central theme that government works for the rich and powerful and not for everybody else. I noted five issues — health care, gun violence, trade, climate change and education — in which she answered the question asked, and pivoted to her central campaign theme.

Sanders had similar goals to that of Warren, with a twist: He is a great debater, and his charisma is so unvarnished, it stands out on a stage with nine others, but he needed to say or do something that showed he was the superior standard bearer for the party's populist wing. He needed to steal some of Warren's thunder. He did not do this. Instead, he functioned as her protective armor. Sanders also was suffering the effects of a cold, so his voice was even more raspy than ever. Nonetheless, as someone who likes Bernie, he showed the passion that is the source of that admiration. But, I do not think he overtook Warren.

Sen. Kamala Harris and South Bend Mayor Pete Buttigieg, who constitute the tier below the frontrunners but above the also-rans, needed to have the kind of dominating moment that would be replayed again and again in the days ahead, in hopes of scrambling into the top tier. Neither had a disastrous night, but both had their weakest performances to date. Both offered responses that sometimes seemed canned and over-rehearsed. Buttigieg sometimes sounds like he is running for national philosopher. Harris was the most consistent in attacking Trump, but I am still not sure why she thinks she should be president or what she would do if elected. I do not imagine either candidate will get the bounce that they needed.

The others — Sen. Cory Booker, former Secretary of the Department of Housing and Urban Development Julian Castro, Sen. Amy Klobuchar, former Congressman Beto O'Rourke, and entrepreneur Andrew Yang, had the same basic goal as Harris and Buttigieg: To score the kind of viral moment that would catapult their campaigns forward, differentiate themselves from the pack, to shine. The most important viral moment was Castro's, and it was a bad one. In challenging Biden's health care stance, Castro asked, "Are you forgetting what you said two minutes ago?" In the aftermath, the commentary was all about how Castro implied the former vice president has memory problems. It was a low blow and it was stupid. Whatever you think about Biden's policy positions, taking a personal swipe at a beloved figure is dumb.

The rest of the undercard had a strong night and the moderators gave them more time than in previous debates. Booker has been strong in two debates in a row, and he did not get a bump in the polls last time. I do not think he said anything tonight that will change that trajectory. Klobuchar had her best performance, but it is too little, too late. Her deeper problem is that the party does not seem inclined to buy her centrist, moderate positions on issues. Yang was Yang. O'Rourke had a very strong performance: He looked like he belonged on the stage for the first time. But his focus, while it has brought the passion back to his voice, is now univocal, centered on the trauma his hometown, El Paso, endured in the mass shooting last month. You can't break out of the pack as a single-issue candidate.

This was the first debate to have an extensive discussion of foreign affairs and all the candidates stuck to the same basic themes, best expressed by Booker: "The America First policy is really an America Alone policy." None of the candidates had anything more specific than using more diplomacy, although Sanders gets high marks for raising the need to cut the Pentagon budget.

The saddest fact in the debate came in the discussion of racism. It quickly turned into a discussion of criminal justice reform. That is the very measure of the ugly, painful legacy of racism, is it not?

I am not sure if the party is well served by more debates at this point. Another 30 minutes taking shots at each other over how to deal with health care is not what the party needs, although the moderates landed some gloves on the "Medicare for All" proposals in a way they had not before. I hope Sanders and Warren introduce a more pragmatic approach to the issue. Certainly it was nice having one night with all the candidates, and the Democratic National Committee needs to continue raising the bar for inclusion in these debates.

The choice facing the Democratic primary electorate is now clear: Do they want a candidate who will call for national unity and offer moderate solutions that may or may not correct the systemic problems in our society that gave rise to Trump in the first place? Or do they want someone who will, in the manner of Franklin Delano Roosevelt, welcome the hatred of the wealthy and powerful? An establishment politician or a populist candidate? Biden is clearly the candidate of the establishment and Sanders and Warren are still fighting to decide who gets to carry the populist flag. Nothing last night altered that dynamic.

Democratic candidate race still fluid, but any would be better than Trump

Last night's Democratic debate confirms this is a three-person race

Post-debate in Iowa: Still a toss-up

Democratic candidate race still fluid, but any would be better than Trump