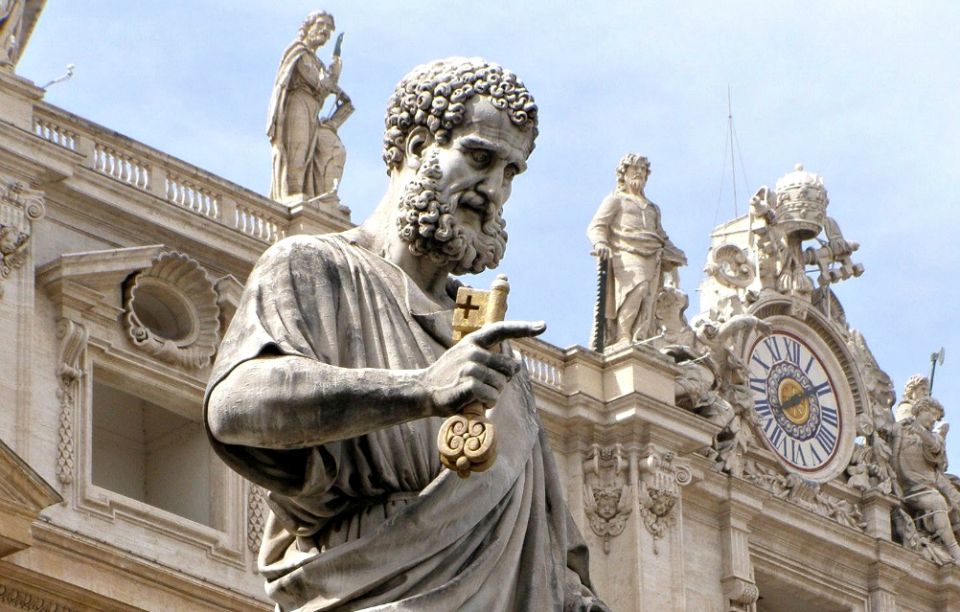 A statue of St. Peter by Giuseppe De Fabris stands outside St. Peter's Basilica at the Vatican. (Wikimedia Commons/Lure)

I always get a bit nervous when the mainstream media turns its attention to Holy Mother Church. CNN has done a great job with its series about the 1970s or the '80s, for which there is ample footage and the telling of the story still is part history, part memory, but I wondered how they would do with their new series, launched last night, about the papacy. Overall, I give the first episode of "Pope: The Most Powerful Man in History" a B-.

The opening words — "One of the most powerful men on earth ..." — and the subtitle of the series seemed inauspicious. Power in the life of the church continues to be misunderstood and misused, sometimes by those who possess it, but even more often by those who want it. I feared they were getting off on the wrong foot. Whether or not you were, as were too many, raised intellectually believe the first step toward understanding is to discern the power relations in a given situation, surely the papacy benefits from a broader and more complicated lens.

Nor was it comforting to see that the first expert interviewed was Anthea Butler of the University of Pennsylvania. I recall Butler's comments in advance of Pope Benedict XVI's 2010 trip to the U.K., when she said of him: "Does he look any different than a Charles Taylor or someone else who had child soldiers and abused children?" Well, actually, Benedict did look different from the murderous Taylor, and informed scholars and journalists recognized in Benedict a champion in the effort to rid the church of the scourge of clergy sex abuse.

In explaining the origins of the papacy in the life of St. Peter, however, two experts hit the nail on the head. Washington Cardinal Donald Wuerl cited Matthew 16 and explained that Peter, and therefore the papacy, became "the authenticating voice."

Susan Wise Bauer of the College of William and Mary, who is not a religion scholar, offered an equally thoughtful comment, saying that Peter became "the symbol of unwavering faith that Jesus is the Son of God, which is the center of the Christian life." Both parts of that comment are critical, Peter's role and the centrality of the confession of faith, not ethics, in the early Christian Church.

Bauer also points out that while many cities developed Christian communities in the first century, only in Rome was one of those communities led by an apostle, and not just any apostle, but Jesus' best friend when he walked upon the earth.

In typical TV vision, the actor playing Nero is homely and looks hunchbacked, and the actor portraying Constantine is handsome and hunky. We do not know what either man looked like, nor how their visage did or did not affect their rule.

More troubling, expert Allen Callahan, Baptist minister and theologian, gets the story of Constantine wrong, or the editor makes it look like he got it wrong. The narrative retells the story of Constantine's vision at the Milvian Bridge, his subsequent victory and his linking of the two. "He decides to be a Christian," Callahan says. The narrator then adds, "One of his first official acts as the first Christian emperor of Rome is to issue the Edict of Milan."

We do not know when Constantine decided to become a Christian, but he was most certainly not a Christian when he issued the Edict of Milan. He declined to be baptized until he was on his deathbed.

Nonetheless, the discussion about how the church became entangled in the life of government during Constantine's tenure is mostly well done. But Bauer's claim that "Constantine is the reason why churches that are in the U.S. have tax-exempt status" is a stretch and Callahan makes light of the doctrinal differences of that time. The image on the screen when the narrator discusses the Council of Nicaea shows Renaissance cardinals and the pope in his three-tiered tiara and the narrator states that Nicaea is the "foundation of the pope's College of Cardinals today." Huh? Cardinals come centuries later, and there was no pope at Nicaea.

Yet, alongside these mistakes, the documentary continues to make the important points as Bauer first explains the decline of Rome after Constantine moved his capital to Constantinople and then observes, "The church is the only institution in Rome capable of addressing the needs of its suffering people."

Caroline Goodson, of the University of London, then makes one of the few statements that seem anachronistic. "The people of Rome were dependent on the church as a state, not as a church that oversaw the relationship between God and man but as a church that oversaw food, water, safety," she says. This kind of sharp distinction between the secular and the sacred is unique to modernity, not to the middle of the first millennium.

It seemed odd to me that while the show does a good job explaining the Crusades and how they were understood as "an act of piety," there is no discussion of the Great Schism between East and West. Similarly, how is a history of the papacy complete without mention of Gregory the Great? The tale jumps straight from the fall of Rome to the reign of Leo XIII.

Again, it is Bauer who explains the large narrative in the most compelling way. "They [the people in the West] know that someone is looking out for them, and all earthly institutions are flawed but to have an institution that is dedicated to looking out in a fatherly manner for people who are lost and astray and suffering, that need will never go away."

If I were making a documentary film about the history of the Catholic Church, the last person I would want reviewing it is myself. I do not mean to nitpick. The large narrative here is much better than usual. Still, in the introductory segment, the images of contemporary popes start with Pius XII, then John XXIII, and then jumps to John Paul II. I am hoping by the time we get to the late 20th century, Papa Montini will get his due.

On balance, for people whose knowledge of the papacy is limited or biased, this first episode is balanced and thoughtful. Its mistakes are in no way fatal, and I find myself looking forward to the next episode.

Column | CNN's 'Pope' series invites nitpicking, but has its merits as well

Habemus papam to me! Tiara in place, I'll have a busy daylong reign

'Humanae Vitae' and the sensus fidelium