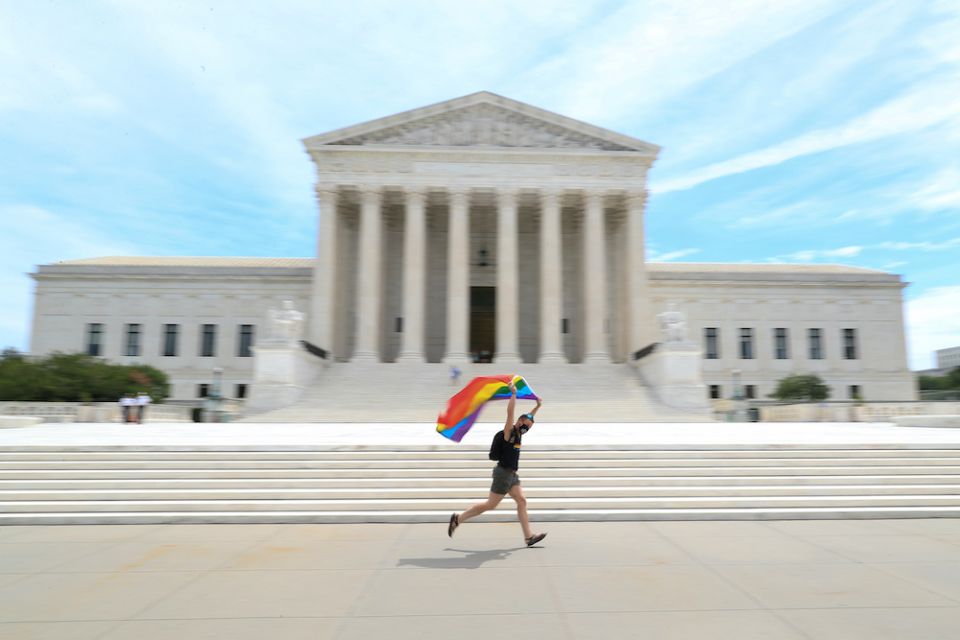 A person runs with a gay pride flag in front of the U.S. Supreme Court building June 15 in Washington. In a 6-3 vote that same day, the Supreme Court said LGBT people are protected from job discrimination by Title VII of the Civil Rights Act of 1964. (CNS/Reuters/Tom Brenner)

There seems to be one phrase missing from most of the commentary I have read about the U.S. Supreme Court's decisions Monday in the three cases Bostock v. Clayton County, Georgia, R.G. & G.R. Harris Funeral Homes Inc. v. Equal Employment Opportunity Commission and Altitude Express Inc. v. Zarda. The court decided, in a 6-3 decision written by Justice Neil Gorsuch, that Title VII of the 1964 Civil Rights Act's ban on discrimination based on sex extends to gay and transgender employees. The phrase that is missing is "common sense."

"Today, we must decide whether an employer can fire someone simply for being homosexual or transgender," Gorsuch wrote. "The answer is clear. An employer who fires an individual for being homosexual or transgender fires that person for traits or actions it would not have questioned in members of a different sex. Sex plays a necessary and undisguisable role in the decision, exactly what Title VII forbids."

Later, he writes, "The statute's message for our cases is equally simple and momentous: An individual's homosexuality or transgender status is not relevant to employment decisions." Gorsuch cites several hypothetical situations to demonstrate why there is no escaping the Title VII prohibition against discrimination based on sex. I defy anyone to read those hypotheticals and fashion a rebuttal of such common sense.

Let us consider one of these hypotheticals: "Consider an employer with a policy of firing any woman he discovers to be a Yankees fan. Carrying out that rule because an employee is a woman and a fan of the Yankees is a firing 'because of sex' if the employer would have tolerated the same allegiance in a male employee." Now, the hypothetical is outrageous in one sense: This Red Sox fan believes firing Yankees' fans is always constitutionally permissible. But only if you fire both women and men, straight and gay, who suffer from the affliction of Yankee fandom.

It was not a great day for originalism. While the majority opinion admits that the drafters of Title VII did not have LGBT rights in mind when they adopted the law, it nonetheless applies. "Those who adopted the Civil Rights Act might not have anticipated their work would lead to this particular result," Gorsuch writes. "Likely, they weren't thinking about many of the Act's consequences that have become apparent over the years, including its prohibition against discrimination on the basis of motherhood or its ban on the sexual harassment of male employees. But the limits of the drafters' imagination supply no reason to ignore the law's demands. When the express terms of a statute give us one answer and extratextual considerations suggest another, it's no contest. Only the written word is the law, and all persons are entitled to its benefit."

In a dissent, written by Justice Samuel Alito and joined by Justice Clarence Thomas, the patron saint of originalism was invoked by name: "what [the majority opinion] actually represents is a theory of statutory interpretation that Justice [Antonin] Scalia excoriated — the theory that court should 'update' old statutes so that they better reflect the current values of society."

The majority opinion faced the issue of religious objections to homosexuality and transgenderism only to point out that they do not apply in these cases:

…worries about how Title VII may intersect with religious liberties are nothing new; they even predate the statute's passage. As a result of its deliberations in adopting the law, Congress included an express statutory exception for religious organizations. §2000e–1(a). This Court has also recognized that the First Amendment can bar the application of employment discrimination laws "to claims concerning the employment relationship between a religious institution and its ministers." Hosanna-Tabor Evangelical Lutheran Church and School v. EEOC, 565 U. S. 171, 188 (2012). And Congress has gone a step further yet in the Religious Freedom Restoration Act of 1993 (RFRA), 107 Stat. 1488, codified at 42 U. S. C. §2000bb et seq. That statute prohibits the federal government from substantially burdening a person's exercise of religion unless it demonstrates that doing so both furthers a compelling governmental interest and represents the least restrictive means of furthering that interest.

Future cases might require the court to consider First Amendment or RFRA claims, but these defendants advanced no such claims. One defendant, Harris Funeral Homes, did pursue such a claim in a lower court, but they did not present it in their petition to the Supreme Court.

It is a sign of how far and how fast our cultural reference points have changed that very few Republican members of Congress criticized the ruling. Of course, those who did criticize the ruling because they thought the court was usurping a legislative function failed to point out that Congress has routinely failed to legislate in this, and other, areas. Senate Majority Leader Mitch McConnell may think he can command time to stand still, but it marches on with or without him.

The response from the U.S. bishops' conference was, unsurprisingly, shrill and hysterical. "By erasing the beautiful differences and complementary relationship between man and woman, we ignore the glory of God's creation and harm the human family, the first building block of society," Archbishop José Gomez, president of the conference, said.

I missed that part of the decision: Where, exactly, did the court say that the differences between male and female were erased? No, the court said those differences could not be the basis for discrimination in a secular workplace. There is nothing in the teaching of our church that keeps us from celebrating this decision.

I understand that there are some conservative Catholics, many of them in the higher reaches of the Catholic hierarchy and staff at the U.S. bishops' conference, who believe that societal acceptance of homosexuality is the hill on which the church should stand, and fight, and die. And I understand that some issues, such as gay marriage, are a tougher lift theologically than some of my progressive friends seem to think. But I worry that the U.S. bishops' conference will decide to support another round of litigation, based on the premise that they are not firing this person or that because he or she is gay, but because that person entered into a gay marriage. I hope they resist that temptation. I fear they won't. The conference is still so removed from the concerns of the average person in the pew, they do not see that for every loud, obnoxious anti-gay letter from a culture warrior Catholic they fret over, five other Catholics are walking out the door because they are tired of the culture wars being preached from the pulpit.

Monday, the Supreme Court, in one sense, did nothing more than apply the plain meaning of a statutory text to a new situation. In another sense, the court helped rid our culture of the residual anti-gay bigotry that for so long characterized it. In a third and deeper sense, the high court helped expand and fulfill one of our nation's foundational promises: equal justice under the law. That is a thing to celebrate.

Column | Equal rights win at the court is worth celebrating, no matter what US bishops' conference thinks