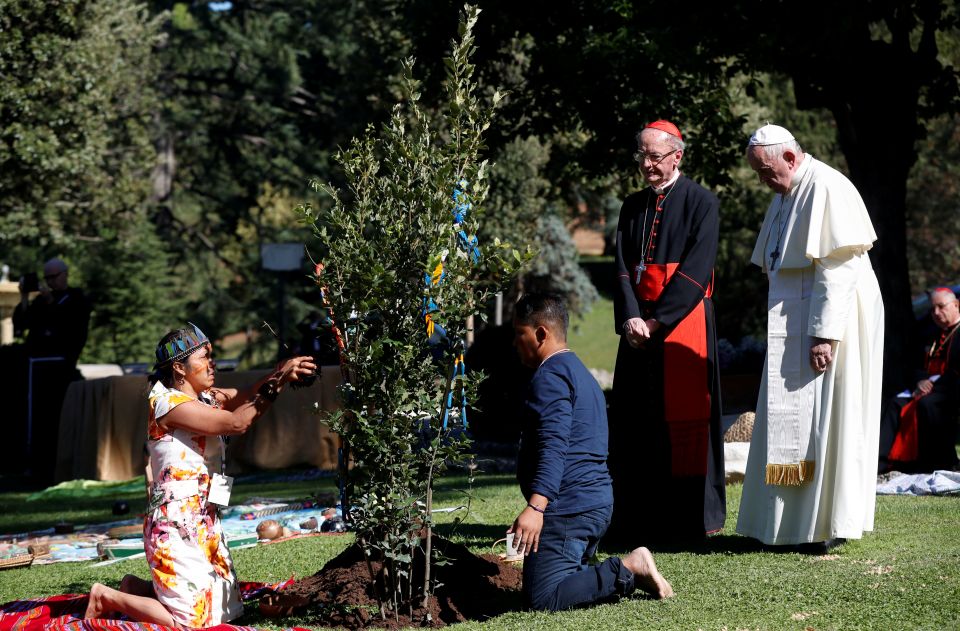 Pope Francis and Brazilian Cardinal Claudio Hummes, relator general of the Synod of Bishops on the Amazon, watch as members of an indigenous community plant a tree during a celebration marking the feast of St. Francis in the Vatican Gardens Oct. 4, 2019. (CNS photo/Reuters/Yara Nardi)

I keep getting questions about the apostolic visitation in the diocese of Buffalo. The visitation is not, repeat not, being conducted under the terms of Pope Francis' recent motu proprio (on his own initiative) Vos Estis Lux Mundi. That permits examination of allegations against a bishop of sexual abuse or of covering up such abuse. An apostolic visitation can look at all aspects of Bishop Richard Malone's diocesan governance, including things as difficult to prove as the morale of the clergy and laity. Archbishop Christophe Pierre made that clear in an interview with the Tablet. He quoted the pope as saying "We need to do a total investigation to go to the roots of the problem." These tea leaves are not difficult to read. I suspect the decision has been made to remove Malone and the Vatican wanted a method that would make that outcome possible.

"Wow." That was Judge Beryl Howell's response to an argument put forward by Department of Justice attorney Elizabeth Shapiro. The department, led by Attorney General William Barr, did not argue that the current House request for grand jury testimony collected by Special Counsel Robert Mueller was categorically different from the House's 1974 request for similar material. In that case, Judge John Sirica ordered the administration to turn over all relevant documents. No, Barr's department argued that Sirica got it wrong, that the administration should not have been required to turn over the materials. Judge Howell labeled the argument "extraordinary."  Barr is reportedly close to Opus Dei. I am expecting the albino monk to show up any moment now.

The New York Times crosses the line when it publishes articles that are irresponsible. This "op-ed from the future" by Lucy Ferriss imagines an America in which abortion is illegal in almost every state. Obviously, I disagree with Ferriss on the core issue: Extending legal protection to the unborn would be a humane achievement, provided our society and culture stepped up to the plate to support women in difficult circumstances. But, what Ferriss has penned is mere scare-mongering and the readers of the Times deserve better.

Almost all is forgiven about the Grey Lady, however, because the Times also published this excellent column by David Leonhardt that shows how the rich really do pay less taxes than the average American, and how relatively recent this phenomenon is. I am wondering: Some of our conservative Catholic friends hold up the '50s as the Golden Age. Does that estimation extend to the marginal tax rates at the time?

Capuchin Fr. Thomas Weinandy, former executive director of the U.S. bishops' conference Committee on Doctrine, is at it again, complaining this pontificate is "a trial" from which we need to be saved. He publishes his rant at The Catholic Thing, and then the National Catholic Register does an article about Weinandy's column. That is how the EWTN universe is mainstreaming, rather than isolating, the craziness on the right.

At the blog WherePeterIs, Pedro Gabriel examines the outrageous claims surrounding the ceremony the Holy Father held in the Vatican gardens to mark the Feast of St. Francis of Assisi last week. Some thought the dance by some indigenous was "pagan" and raised questions about a statue of two pregnant women.  In fact, the image of the pregnant women was not a representation of "Mother Earth" but of the Virgin Mary and Elizabeth and, besides, Francis referred to the earth as "Mother" in his Canticle of the Creatures. As Gabriel points out, a hermeneutic of suspicion reigns supreme in certain circles on the Catholic right, just as it has before in certain Catholic left circles. Suspicion is not an appropriate hermeneutic for a Christian, is it?