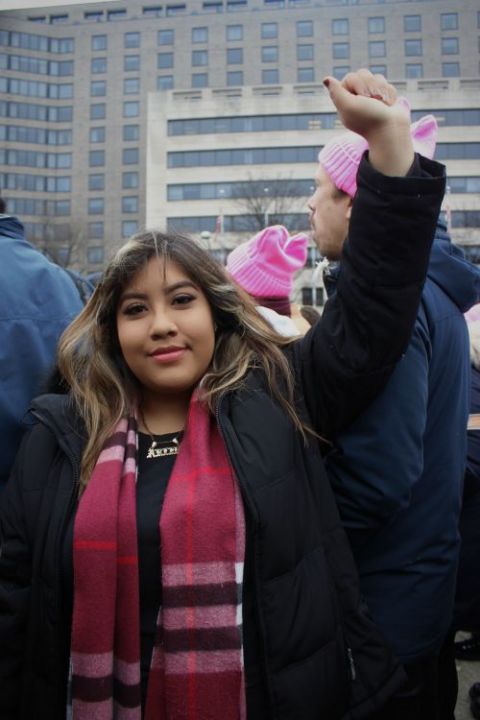 When my mother was 26, she decided to sell our possessions to gather the money to buy our way into the United States. She saved up, worked extra shifts and finally contacted my aunt in Houston, Texas.

It was sometime in the fall of 2003 that I hugged my grandmother goodbye in the middle of her patio surrounded by her beloved plants. I still remember my grandmother's brown, calloused hands caressing my cheek as she said goodbye. She gave me a prayer card then that still fuels my strength. I was 4 years old.

My father knelt to my height. I didn't know it then but that was my last real interaction with him until the phone call telling us he had lost his battle with brain cancer.

We took a three-day bus ride to the border where we waited for a coyote. We crossed the border at night. I wasn't fully conscious or certain who la migra (Immigration and Customs Enforcement or ICE) was, but I knew they were bad and that we had to avoid and hide from them. I think often of the hundreds of lives lost in the desert, the dreams that went unaccomplished, the families that continue to pray that their loved one shows up. I think often on the possibility that I could've died at that border.

Hundreds of families are separated every year because of anti-immigrant laws that perpetuate the blatant racist profiling of undocumented immigrants. When we think about social justice in the United States, we have to leave one-dimensional narratives behind. Our immigrant community deserves human rights and the opportunity to flourish in a society where they've created bigger dreams than the ones they arrived with.

The House of Representatives is soon expected to vote on the Dream and Promise Act, which would provide a path to citizenship for many undocumented immigrants who have been living in the United States for years. This legislation could change everything — allowing me to have the stability I need to pursue my dreams and reconnect with my family in Mexico.

When I received the news of my full ride scholarship to Trinity Washington University, I felt a sense of accomplishment, not because of the scholarship but because after 15 years I had taken a step closer to the reason why my mother and I left Mexico: the dream we were pursuing for a better life. I thought of the undocumented students who advocated alongside with me in the campaign to bring in-state tuition for undocumented resident students to North Carolina.

As a DACA (Deferred Action for Childhood Arrivals) recipient, I've been given the opportunity by past activists to use my voice for my community, but that changed on Sept. 5, 2017, when then-Attorney General Jeff Sessions announced the termination of the program. I was no longer eligible to reapply. I'd be vulnerable for deportation beginning on June 1, 2018. It was students without DACA status, my parents and my community that reminded me of our resilience.

We had created a community and a network of support despite the adversity. Yet it's moments like this past February, when North Carolina faced massive ICE raids or the deportation of Eduardo Samaniego, the undocumented activist who was first jailed and later deported to Mexico, that reminds me of the possible involuntary separation from family.

A comprehensive bill like the Dream and Promise Act would provide the possibility for activists like Eduardo to return to the United States and for me to accomplish my dreams of reuniting with my family in Mexico. It is a step forward to justice for my immigrant community.

[Arlin Karina Tellez Martinez is an immigrant rights activist and an undocumented student at Trinity Washington University in Washington, D.C.]