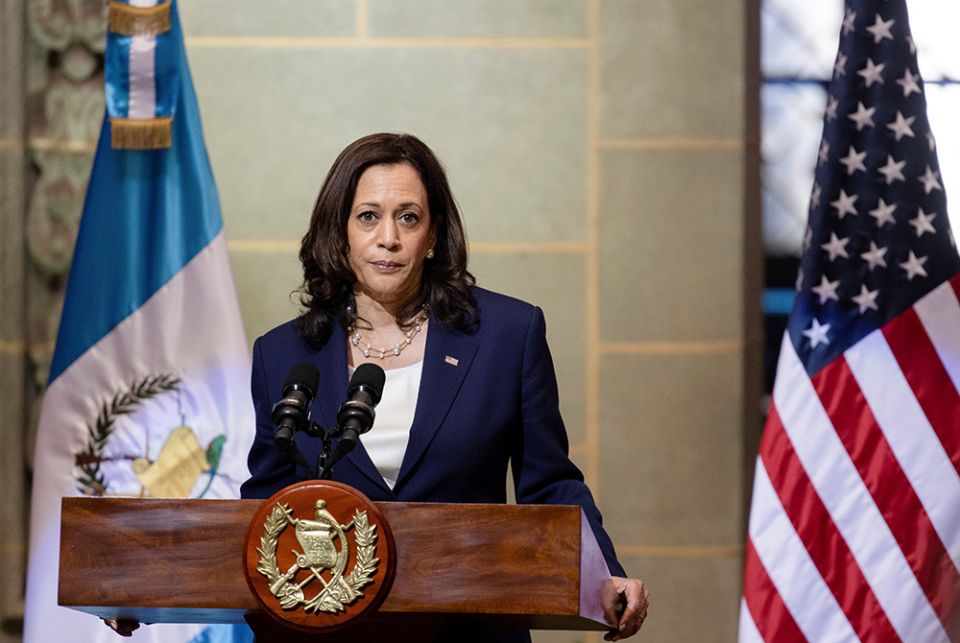 U.S. Vice President Kamala Harris addresses a news conference held with Guatemalan President Alejandro Giammattei June 7 in Guatemala City. "Do not come. Do not come," Harris said in a message to would-be asylum-seekers. "The United States will continue to enforce our laws and secure our border. If you come to our border, you will be turned back." (CNS/Reuters/Carlos Barria)

The issue of immigration into the United States is both simple as a moral issue and complex in terms of policy and politics. The moral simplicity should be allowed to direct and channel the political decisions and policy applications. Unfortunately, we fear the administration of President Joe Biden is allowing that complexity to overwhelm the simplicity, and so we find ourselves in a mess.

How simple is the moral issue? In the Book of Exodus, we are told "You shall not oppress or afflict a resident alien, for you were once aliens residing in the land of Egypt." The Holy Family were refugees, also into Egypt, fleeing the terror of King Herod. And, there is the experience of our own time when the failure of countries to welcome Jewish refugees in the 1930s meant sending them back to Hitler's death camps. This last gruesome fact led to the adoption of Article 14 of the Universal Declaration of Human Rights: "Everyone has the right to seek and to enjoy in other countries asylum from persecution."

If these universal moral principles were not enough to form the consciences of the American people, there is our own national history. It is a commonplace to say that ours is a nation of immigrants, but there is nothing common about the phenomenon. America is almost unique in its long history of welcoming and assimilating immigrants; only in recent years have other countries mimicked what we have been doing since the founding of the republic. Indeed, if you were to remove the story of migration from the history of the United States, what would be left?

As Catholics, we know that every pope in modern times has argued for the rights of migrants and that Pope Francis has made their plight a special focus of his papacy. From his first trip outside Rome to Lampedusa to his bringing Syrian refugees back to be cared for by the Vatican from his visit to a camp on the island of Lesbos, the pope has shown his solicitude for migrants.

In the long history of human ingratitude, we place the indifference to the plight of new arrivals on the part of those whose forebears came to these shores three or four generations ago high on the list. That such ingratitude is not uncommon among some Catholics is especially shocking given the teaching of the church and the familial history of virtually all Catholics in this country.

If the morals are so easy, why are the politics and the policy so difficult? When the administration first took office, many of the mechanisms and infrastructure necessary for receiving migrants and refugees had been hollowed out by the previous administration. What is more, good news travels fast and migrants throughout Central America, elated that Biden had won the election, mistakenly thought they could pack up and head for the U.S. straightaway. The border became a bottleneck of human suffering.

The president tasked Vice President Kamala Harris with solving what was quickly becoming a crisis, and her staff seems to have spent plenty of time complaining on background about being assigned such a difficult job and not enough time talking to the heads of those religious agencies that could help solve the problem.

The vice president's whirlwind trip to Guatemala and Mexico also did little to improve the politics of the situation. "Do not come. Do not come. The United States will continue to enforce our laws and secure our border," she said in a news conference in Guatemala. "If you come to our border, you will be turned back."

We understand the need for clarity, but her simple declaration fed the impression that fleeing the violence of their cities and the poverty of their hinterlands was some kind of choice for the desperate people of Central America, rather than a necessity. It was not balanced by a promise to do everything humanly possible not only to improve our capacity to help refugees but to help the countries of the Northern Triangle achieve domestic tranquility so that fewer of their people wish to flee in the first place. We had hoped for more.

We are baffled that the administration has not reached out to the Catholic and other churches to help care for these desperate people. Church leaders decided they needed to step up to the plate without being asked and met at Mundelein Seminary in early June. Dylan Corbett, executive director of the Hope Border Institute, helped organize the meeting, which focused on "a shared recognition that we have a generational opportunity to reform our immigration system and develop an effective regional approach to addressing the drivers of migration."

Corbett told NCR, "Harris' comments in Guatemala were a misstep, because they reinforced Trump's attack on the rights of asylum-seekers and refugees, and we're still struggling to undo that damage, both at the border and on issues like the refugee cap." He suggested giving her a "mulligan" and "urgently get the administration and the church to the table to ensure we receive asylum-seekers with dignity and compassion, create the conditions where people can stay in their communities because they have real opportunities, and make some meaningful reforms to our immigration laws."

We could not agree more. It is too soon to give up on the Biden administration on this or any issue. Lord knows, they inherited a thousand messes, large and small, from the previous administration. But the recipe for political success is clear: Articulate the moral vision that corresponds to our national history and the better angels of our fallen human nature. Then, and only then, will the administration be able to craft policies that meet the demands of justice and the needs of the moment.

A version of this story appeared in the June 25-July 8 print issue under the headline: 'Do not come' won't cut it for immigration policy .

Editorial | Editorial: 'Do not come' won't cut it for Biden immigration policy