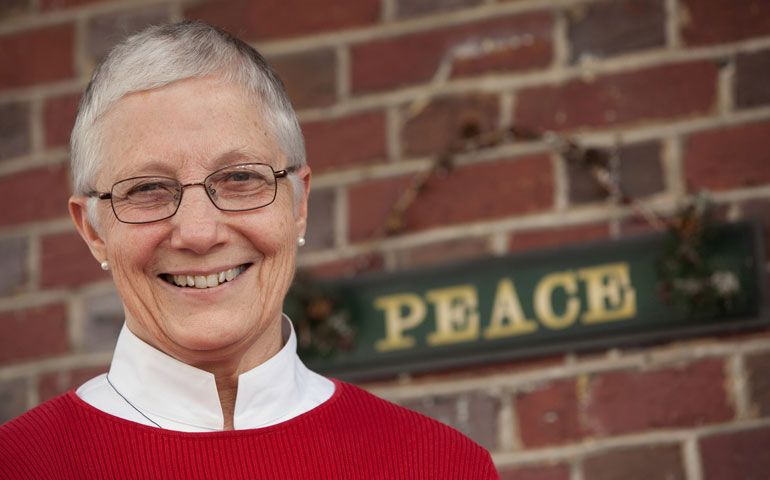 Marie Dennis is pictured at the Assisi Community house where she lives in Washington. (CNS/Nancy Phelan Wiechec)
This article appears in the NCR's Person of the Year feature series. View the full series.

As 2016 draws to a close, it is easy to catalog a seemingly endless list of suffering that humans have endured this year through wars and acts of terror that continue to rob the globe of peace. The violence that plagues humanity seems limitless in its ability to mutate into new expressions while continuing to stoke the underlying causes: racism, sexism, economic injustice and environmental degradation.

The intractable tragedy of Syria -- the slaughter there and the resulting humanitarian disaster that spills across borders and continents -- is the year’s most disturbing reminder of how inadequate our current structures are at stopping violence.

It is the lot of peace to have to battle the headwinds of violence; the province of the peacemaker to find ways to be heard above the din of the warrior, to make the case for nonviolence against the forces, as Pope Francis has pointed out, who choose war not only for ideological reasons but because they profit from it. Peacemaking is an exhausting calling, but one more essential today than perhaps at any other time in human history.

It is no surprise, then, that one of the central figures stepping into the breach is an unimposing woman whose life’s dedication to peace-building has resulted in an unprecedented conversation at the highest levels of the church.

Marie Dennis, co-president of Pax Christi International, has long known that making peace in today’s world requires not only new ways of acting, but also new ways of seeing and thinking.

In this regard, 2016 could prove to be a watershed year. In April, at an unprecedented Vatican conference, the Pontifical Council for Justice and Peace and Pax Christi brought together activists, academics and church officials to re-examine how the church thinks about war and peace, violence and nonviolence. The resulting document, “An Appeal to the Catholic Church to Recommit to the Centrality of Gospel Nonviolence,” lays the foundation for a fundamental shift in church teaching.

While some herald the development as a rejection of the church’s long-held teachings on just war, others see it as a more radical redirection. The document states: “The time has come for our Church to be a living witness and to invest far greater human and financial resources in promoting a spirituality and practice of active nonviolence.”

This initiative could well prove to be the catalyst for the new ways of seeing and thinking that can spark people’s imagination to fresh means of resisting violence of all types.

As a leader in Pax Christi for decades and the former head of the Maryknoll Office for Global Concerns, Dennis has long shepherded efforts to deepen understanding of Gospel nonviolence. She was the chief animator of the efforts in Rome earlier this year and was back at the Vatican in December, working to ensure the process stays on track.

Her efforts might well lead to a papal encyclical. They have already resulted in a substantial pontifical statement, Francis’ World Day of Peace message for 2017.

Dennis’ approach, particularly her work with Pax Christi groups around the world and regular meetings with representatives at the United Nations, is global in scope, yet extremely personal. A graduate of Trinity Washington University and the mother of six grown children, she told NCR in a 2014 interview that her sense of social justice was awakened initially during a parish workshop decades ago. “I mean, literally, in one day, I walked out of that workshop and I was never the same again.”

This is probably why she continues to give parish workshops and retreats to this day. In September, she was at St. Francis of Assisi Parish in Burien, Wash., near Seattle. Her goal, she told NCR, “is to engage participants in a dynamic conversation about the potential for the human community to move beyond perpetual violence and war.”

She understands that peacemaking is not a one-size-fits-all proposition. She embodies the kind of quiet, behind-the-scenes, long-haul persistence that really is necessary to get things done.

For the leadership role she plays in guiding the church to think about just peace and for her personal witness of Christian nonviolence, we name Marie Dennis NCR’s person of the year for 2016.

Editorial | Editorial: NCR's person of the year for 2016

Faith was integral to Bobby Kennedy's life and politics