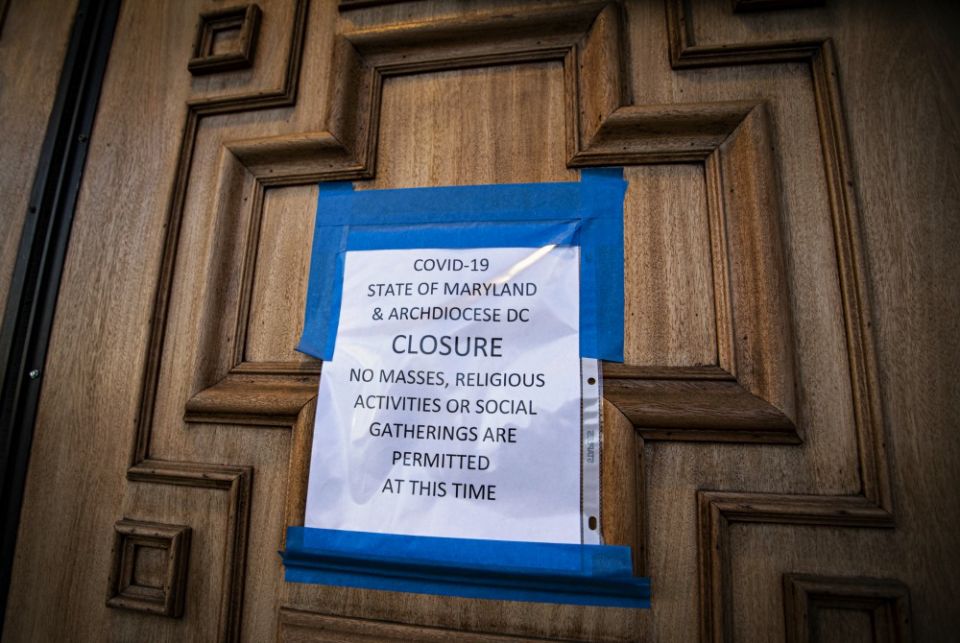 A sign on the door of St. Mary's Catholic Church in Landover Hills, Maryland, alerts the public there will be no Mass. (CNS/Chaz Muth)

A group of Catholics has assembled under the banner "We Are an Easter People," arguing that churches should remain open and that Catholics should congregate in them for services. Religious freedom is the shibboleth in use to incite fear about some unspecified state interference in religious activity because of civil orders to close houses of worship during the current pandemic.

That reasoning has been misused in recent years in misinformation campaigns about the Affordable Care Act, and it is being used in this moment to raise objections that not only lack merit but are inconsistent with Catholic teaching itself.

The quickly assembled group is seeking signatures on a letter appealing to U.S. bishops, imploring them "to do everything you can to make the sacraments more available to us during this crisis." It is impossible to object to that sentiment, and perhaps some might come up with a creative idea or two to grant that wish. But the idea as a broad prescription is dangerous and treats cavalierly a real threat to the public.

Included in a list of nine requests are those asking bishops to request that priests be permitted to minister to patients in hospitals and in the home; that civil authorities recognize religious services as essential services; that Masses be permitted in a parking lot; to find safe ways of distributing the Eucharist; and to make every effort to make available "some form of a public Mass, especially the Easter liturgy, and then encourage pastors to conduct it."

In the midst of a global pandemic, with hospitals stressed to the maximum, doctors desperate to find enough personal protective gear and simply enough face masks, and civic leaders pleading with people to limit outside activity to the essentials, the presumption that clerics will somehow figure a way to safely conduct public services and distribute the Eucharist is delusional.

Sacraments as "personal protective equipment" is a catchy image but grossly irresponsible as a view of sacraments and of the people enticed to take the slogan literally.

Besides being reckless, the pitch made by the group — "We've got to have, regardless of risk to others" — is more rooted in a consumerist view of religion than authentic sacramental theology. Alternatives are available, especially in the digital age. And perhaps small groups of devout Catholics might get together in the ether to meditate on those around the globe, including the Amazon region, for whom access to the sacraments as we enjoy them is a rare occurrence.

Any attempt by a state to arbitrarily close down churches or limit the possibility for worship would be extremely alarming. But to say a state has no right to temporarily demand church closures for the sake of the common good during a pandemic is nonsense bordering on evil.

Religious freedom as a right "is subject to certain regulatory norms," according to the Second Vatican Council document Dignitatis Humanae, the declaration on religious freedom. "In the use of all freedoms the moral principle of personal and social responsibility is to be observed. In the exercise of their rights, individual men and social groups are bound by the moral law to have respect both for the rights of others and for their own duties toward others and for the common welfare of all."

That would seem to cover staying at home and not further spreading a deadly virus during a pandemic.

A version of this story appeared in the April 17-30, 2020 print issue under the headline: Real 'Easter People' will stay home .

We're huge Notre Dame football fans, but should they even be playing this fall?