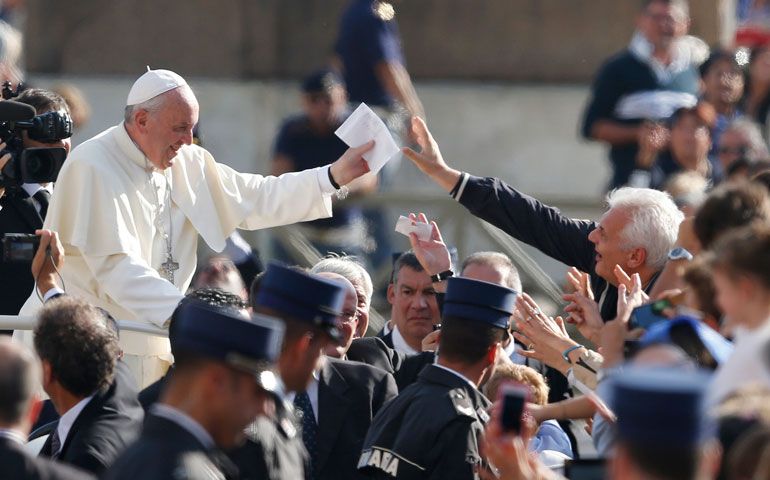 Pope Francis accepts a letter from a pilgrim as he arrives to lead his general audience in St. Peter's Square at the Vatican Oct. 16. (CNS/Paul Haring)

Pope Francis has made headline after headline for personally reaching out through letters and phone calls to people who have written to him, and speaking pastorally with them. The Italian newspaper La Repubblica now reports that the pope sent a handwritten reply to a group of gay and lesbian Catholics in Italy, and the original letter may have prompted the pope's recent warm remarks on gay people.

Pen and paper. Among the many revolutions made by Pope Bergoglio, in addition to phone calls home to ordinary people ... there is also the "post effect," the mountain of letters delivered every day at his residence in Santa Marta, and sent directly to him. ...

Some people think it may have been one of these "messages in a bottle" that inspired the breakthrough of Bergoglio about gays. A letter sent in June to the pope by various Italian gay Catholics ... where gays and lesbians asked Francis to be recognized as people and not as a "category" and called for openness and dialogue on the part of the Church, recalling that the closure "always feeds homophobia."

Further information comes from America magazine, which only weeks ago carried a groundbreaking interview with Francis where his remarks on homosexuality were positive and welcoming. That publication reports on the Italian group, Kairos of Florence:

A leader of the impromptu committee said as gay Catholics they had in the past written to other members of the church leadership in Italy and had always before been rewarded with silence. …
The Kairos group said they also received a letter from the Vatican Secretariat of State, which informed them that Pope Francis "really enjoyed" their letter to him and the way it was written, calling it an act of "spontaneous confidence."

One Kairos leader said Pope Francis had also assured the group of his blessing, something they could not before have imagined happening. The members of Kairos have decided to keep the rest of the message of both letters private.

When New Ways Ministry led a pilgrimage to Italy in 2011, the Kairos group met with our American travelers to share stories and perspectives. Francis DeBernardo, our executive director, is contacting them currently to learn more about this papal letter.

While the contents of the pope's letter remain private, truly as if between a pastor and the people he serves, there are broader lessons for the lesbian, gay, bisexual, transgender and ally Catholic community in this experience.

First, the wisdom that relational encounters with people are the most effective form of advocacy is relevant even for the pope. If La Repubblica's conjecture is correct that the personal letter from Kairos of Florence led to Francis' "Who am I to judge?" and other comments that have greatly shifted the church's tone on LGBT issues, then everyone should be writing letters to Rome. New Ways Ministry wrote a letter to Francis, telling him about the goodness and holiness of Catholic LGBT people and pastoral outreach to them here in the U.S. Would you consider writing your own thoughts to him?

Second, if reaching out to the pope is effective, perhaps it is time for Catholics to reach out to their local church leaders, namely priests and bishops. Sharing personal stories to replace philosophical constructs with human faces and relationships might lead to further conversions.

Francis' pen-and-paper revolution is truly radical, and transforms hierarchy into personal relationships. It offers each of us a moment to speak to the pope and bishops as if they are our own parish priests. As the gay and lesbian Catholics of Florence did with their experiences, this is an opportunity to offer our joys and hopes, griefs and anxieties about those matters closest to us. Putting pen to paper is a simple act, but allows each of us to join Francis in answering God's call to rebuild the church. If you write to Francis or local church leaders, please let us know.

[Bob Shine is on the staff of New Ways Ministry, a national ministry of justice and advocacy for LGBT Catholics.]

Editorial: The US government's use of torture is an indelible stain on the nation's conscience

Editorial: There is a danger in secularizing Christian symbols