'Friends: The Reunion' is the one about being 'there for you' 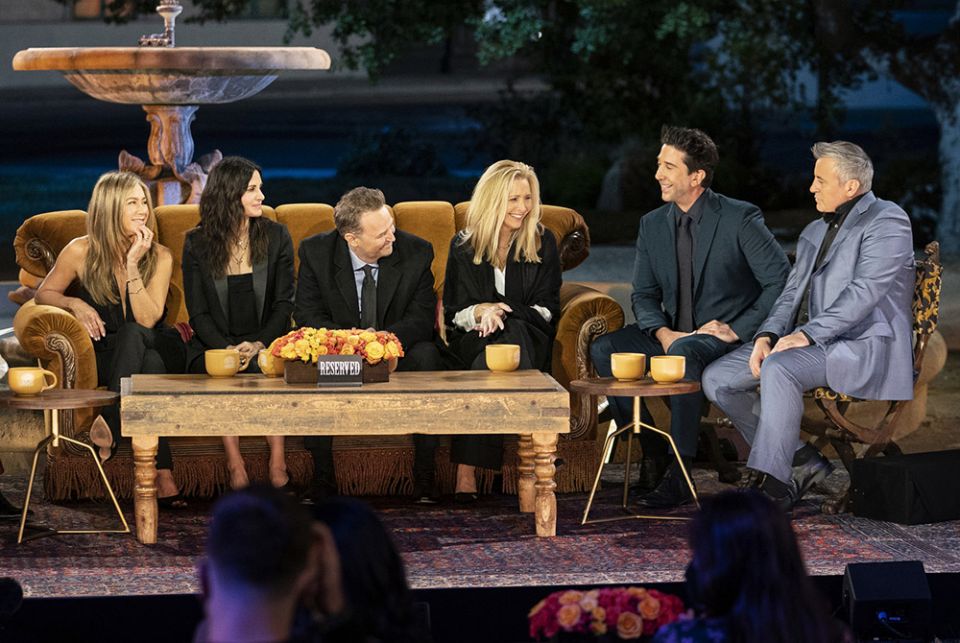 Watching "Friends: The Reunion" on HBO Max recently, I realized it's somewhat strange that I loved that show so much during its 10-year-run on NBC. The creators of "Friends" pitched the show as about that post-college 20-something time in your life when "your friends are your family." But having entered the Jesuits a year after I finished college, I never really had that time.

While my school pals might have been watching "Friends" together or with dates after work, I was in a Jesuit TV room somewhere with a bunch of other young men who, like me, had recently taken vows of poverty, chastity and obedience. We were friends and a lot of our lives together was just as wacky as life on the show. But there was a lot that was pretty different too.

But then maybe "Friends" was never really about life after school anyway. It didn't really have enough hardship or wonder in it to reflect that. For me, it was always more a show about college itself, that time of life when you didn't know what you wanted, and it didn't matter because you could spend all your time hanging out with friends who felt the same and were happy to just sit around all weekend playing "Burger Time" or climbing onto the rooftops of neighborhood restaurants in the middle of the night. It was a world where anything could happen, and there was little to fear because there were few real consequences.

"Friends" was always a strange show, too, in that the media was intent on forcing cast members Jennifer Aniston, Courteney Cox, Matt LeBlanc, Matthew Perry, David Schwimmer and Lisa Kudrow to live the experience they were performing, an obsession that prevented them from having anything like a normal life. How many years did it take Jennifer Aniston alone to extricate herself even slightly from the attention of the paparazzi?

In the opening credits the theme song keeps repeating "I'll be there for you," and we're meant to identify with that sense of mutual care and camaraderie that friendship offers. But looking back now I also recognize in it a certain protective quality. The characters are put out there on display for us and made to perform. The credits end with them getting to sit down, turn off the light and face away from us, the show finally over. They're there for each other because the world around them is demanding and intrusive. 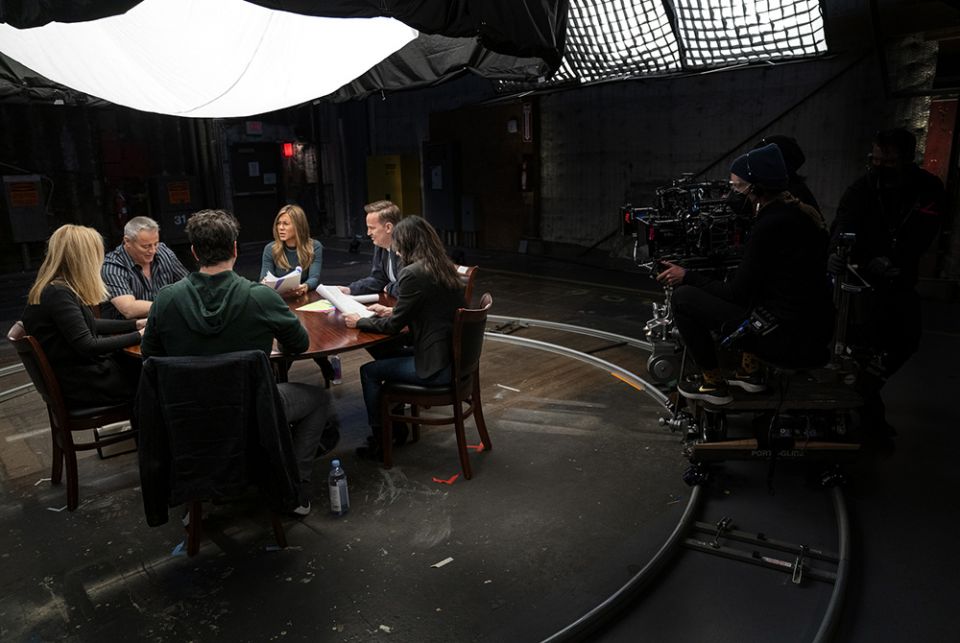 The cast of the show takes part in a reread during "Friends: The Reunion." (Courtesy of HBO Max)

In a way the reunion maintains that conflict. The episode is presented in part as a reality TV program, giving us the inside scoop as these six actors reunite for the first time since the show ended. We watch them admiring the set and getting their first look at each other, telling stories like they're just hanging out, when in fact we're there watching them, intruding on that time.

There's no actual episode to the reunion, which is a little unfortunate. The writing on that show was so good and the chemistry so alive. Watching them sit around a table rereading things they performed 20 years ago is sometimes almost as good as the real thing, but not quite. And when you come to the circus you want to see the acrobats fly.

Occasionally the magic happens just in their interactions — them playing Trivial Pursuit together about the show, or surviving a group interview with James Corden's endless unctuousness. One of Schwimmer's stories is interrupted by Kudrow freaking out over a bug, and suddenly for a moment it's all so very Ross and Phoebe.

Just as watching the show when it aired kept alive my experiences of college, the reunion reminds me of my own experience of reunions, which are always such a muddle of gratitude and sadness. Friendships are sites of so much buried treasure, memories and repartee and experiences that we can often only fully remember when we we're together. To return to friends you haven't seen for a long time is to realize how lucky you were and still are.

But sometimes reunions are also reconnections with parts of yourself that you'd forgotten, including the dreams that you had back then, the things you said you were going to do and haven't, or failed at, or perhaps succeeded at but it wasn't what you thought. I spent a lot of the reunion watching Matthew Perry, who said little and often seemed uncomfortable. In some of the other actors as well, you could see a certain skittishness around the camera, a sense of vulnerability and maybe pain. Returning to a world from 20 years ago is an act of recovery but also of loss.

When I first started in screenwriting school, our sitcom professor told us that every sitcom is a meditation on hell. The characters are trapped in situations from which they can never escape until maybe the very end — in-laws that drive them crazy; a boss who is ridiculously inappropriate; the person you want to marry dating someone else. It's actually the fact that they are trapped that makes their stories so funny and compelling. But most of the time those situations would not be fun to live through.

Listening to Perry describe the terrible feelings he went through every single time he delivered a joke that didn't get a laugh, Schwimmer talk about having to work with a monkey that was constantly eating live grubs and then rubbing their remains into his hair, or Matt LeBlanc tell the story of turning on his TV and seeing the screen broken into six squares, each of which was an image from a helicopter of one of their homes, you get a taste of that "trapped in hell" dimension of their experience.

But when I consider my favorite memories of the series itself, I note that it's usually the times when the story went hilariously off the rails, or the characters seemed to break free of the dominant narratives of the show. It's Monica ending up with Chandler or Rachel walking away from her supposed OTP Ross (ugh) in favor of Joey; or literally anything that Phoebe did at any time. (Lisa Kudrow is basically a living avatar of anarchy and joy.)

In one of the best moments of the reunion, young people tell stories of watching the show to give them a sense of friendship they weren't experiencing in their own lives, or learning from the show that they could demand more than they thought. In religious circles we call what they're talking about revelation, story as an unexpected encounter with something bigger than ourselves, something that opens us up to deeper truth and new possibilities.

Six people sitting around drinking coffee might seem like a strange place for God to show his face. But does a burning bush in the desert really make more sense?

And really right from the start, when Rachel left her fiancé at the altar, "Friends" was a story about people who refused to believe they had to be trapped, who believed life could be better than they had been told. As actors they might have been there for each other in a mostly protective way, as they tried to survive well, us. But as characters their friendship was not just a shelter from the storm, but a launching pad to unknown futures that they sensed but couldn't see, to a life that somehow would give them more. 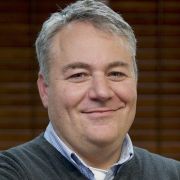 Jesuit Fr. Jim McDermott is a screen and magazine writer in Los Angeles.

Opinion | 'Friends: The Reunion' is the one about being 'there for you'

Free the Eucharist from the curse of clericalism