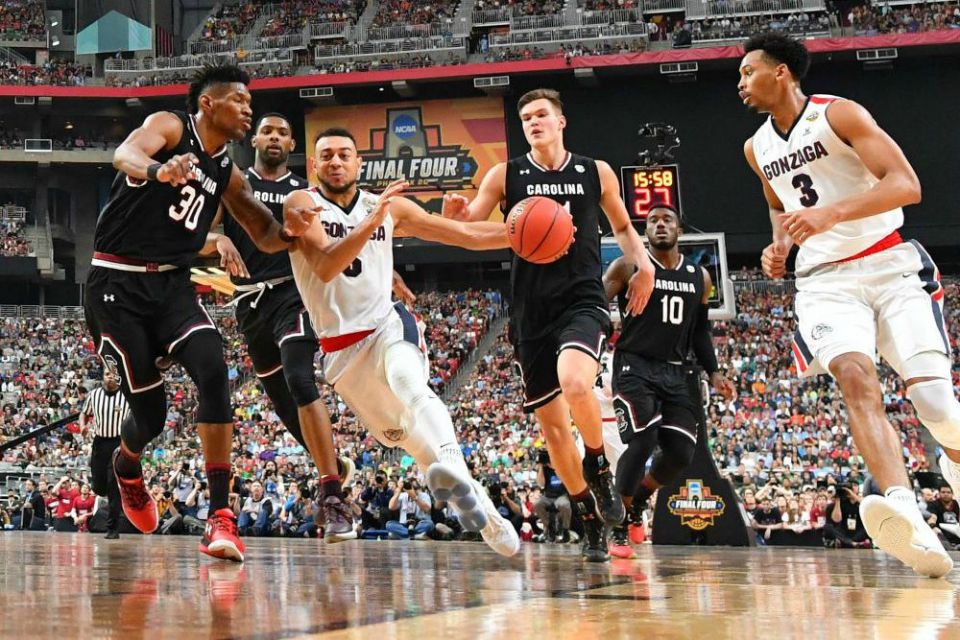 Gonzaga Bulldogs guard Nigel Williams-Goss (5) drives to the basket past South Carolina Gamecocks players during the semifinals of the 2017 NCAA Men's Final Four April 1, 2017, at the University of Phoenix Stadium in Glendale. Gonzaga beat South Carolina 77-73 to advance to their first national championship. (CNS/USA-Today Sports/Reuters/Bob Donnan)

After Loyola University Chicago and Villanova made the Final Four last year, with the Wildcats winning their second championship in three years, this has been a down year for Catholic schools in the NCAA men's basketball tournament. Only one made it to the Elite Eight: top-seeded Gonzaga University.

It's not a surprise the Bulldogs are still standing. Since making a Cinderella run in the 1999 tournament, Gonzaga has quietly transformed into a national college basketball powerhouse, churning out top-10 seasons and NBA players with incredible consistency. How does a small, Jesuit university in Spokane, Washington, end up competing so strongly with the Dukes and North Carolinas of the world? How have they become the undisputed top program in the Western time zone — better than UCLA, USC, Oregon, Washington and Stanford?

To learn a bit more about the program, I reached out to Peter Woodburn, who runs the Gonzaga SB Nation site, The Slipper Still Fits. He graciously answered a few of my questions.

Laskey: First, what's your role at The Slipper Still Fits, and how did you get into Gonzaga blogging? What's the school like? What is the community around the basketball program like?

Woodburn: I graduated from Gonzaga with a B.A. in journalism in 2005 — right around the time that newspapers started cutting staff and folding like crazy. When I realized that I didn't want to make the sacrifices to work at a newspaper, I found the happy medium with blogging. This way I get to write for fun and still be able to feed myself each night. As for Gonzaga the campus, I think the big word is community — it really is just one big community. I graduated over 10 years ago, but I feel an instant connection with most graduates that comes my way. That community is definitively obvious during the basketball season. During the winter, Spokane is cold, snow covered, ice covered and in need of some pick-me-ups. The basketball programs, both men's and women's, provide that entertainment a bunch of college kids, and the greater community, crave.

Jimmy Kimmel has a bit going about how he doesn't think Gonzaga actually exists. What has that experience been like? How has the fanbase reacted?

I imagine part of the bit is rooted in the fact that Gonzaga — a small, Jesuit university in Spokane — has become a consistent national college basketball powerhouse. How has that happened? Casual fans might remember the first Cinderella teams, but that was a long time ago. I imagine head coach Mark Few has played a pretty huge role.

It has been a slow ascension from a potential flash-in-the-pan 1999 season to the consistent powerhouse we see today. Bud Withers has written an entire book about it, but if you have to condense it into a quick answer: The key for Gonzaga's rise has been the consistency up top. Athletic Director Mike Roth has been around the whole time. Mark Few took over for Dan Monson in the 1999-2000 season and has largely surrounded himself with a very stable set of assistant coaches. Gonzaga's philosophy has never been about going to recruit the top player in the nation, they've always focused on the top player for their system. The Gonzaga way is what has helped Gonzaga rise to the top — and we are really enjoying the fruits of it all now.

Who has made this particular team successful this season? Basically, tell me about Brandon Clarke and why he rules.

Brandon Clarke is the most athletic player to come through the program in forever, and his overall impact on college basketball this season has been overshadowed because it is the Year of Zion [Duke University Blue Devils' freshman forward Zion Williamson]. In any other year, we'd only hear about [Gaonzaga's Brandon] Clarke. He is one of the most efficient big men in the entire nation, and his athleticism allows him to be a literal game changer on the defensive end. You throw in the overall skill level of Rui Hachimura, who is probably one of the nation's most consistent scoring threats, the senior leadership of Josh Perkins, and the "never seen a shot I don't like" mentality of Zach Norvell, and the Zags can score better than the rest the teams in the NCAA.

Who's your favorite Zag of all time?

Probably Ronny Turiaf. The skill, the passion, such an incredible and gentle soul. Plus he was there when I attended GU!

Theological education needs more than a splash of ethnic color

Your thoughts on firing gay teachers at Catholic schools