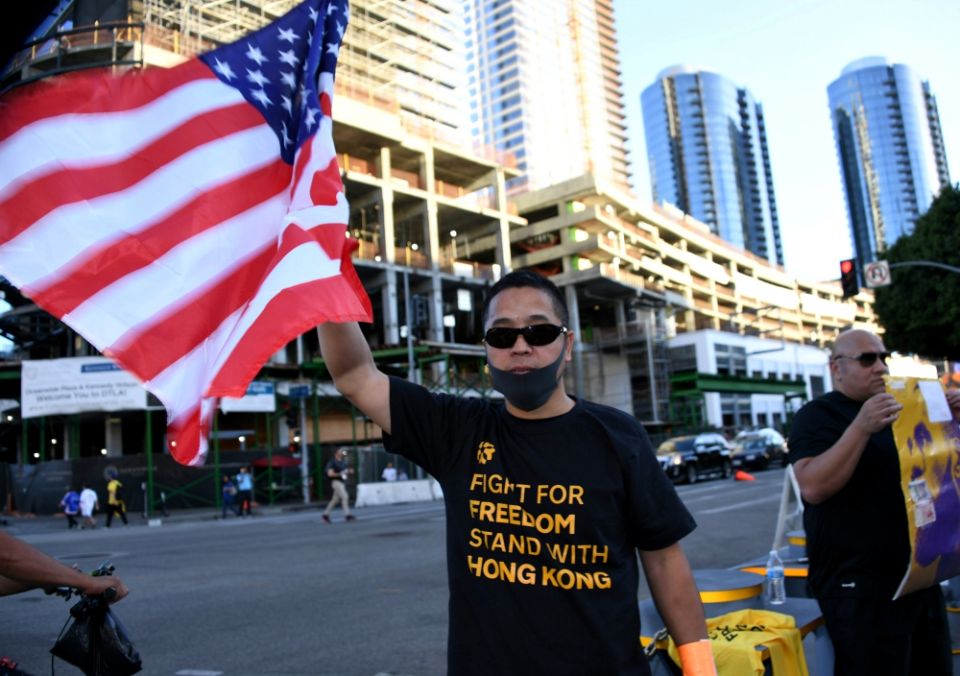 A fan wears a T-shirt supporting Hong Kong and holds a U.S. flag before an NBA game between the Los Angeles Lakers and the LA Clippers in that city Oct. 22. (Newscom/USA Today Sports/Kirby Lee)

Before I tell you why I'm approaching this new NBA season with a bad taste in my mouth, and why that makes me sad, here's one factoid that illustrates my level of pro-basketball obsessiveness: I regularly listen to four different podcasts that are just about the Philadelphia 76ers, plus three more about the NBA as a whole. This does not include the time I spend reading blogs and setting the lineups of my two fantasy NBA teams, both called the Rosary Embiids after my favorite player, Joel Embiid, and the faith we share.

There are a handful of reasons for my unbridled devotion. A few: The NBA is the best forum in the world for consistent feats of breathtaking athleticism. Basketball at its highest level is the perfect combination of individual achievement and teamwork. Marquee players are switching teams all the time via trade and free agency, which makes the league an unending source of entertainment year-round. There are so many larger-than-life personalities in the game, such a great Twitter community, and the league has perhaps surpassed baseball as the preferred sports home of lovable data nerds.

Perhaps most of all, I have been suckered in by the NBA's apparent wokeness. While the NFL effectively banned Colin Kaepernick for protesting the national anthem at games, the NBA didn't punish its players for the demonstrations.

Head coaches like Steve Kerr and Gregg Popovich frequently voice progressive political opinions and are lauded for it. (You can even get a Popovich/Kerr 2020 T-shirt.) LeBron James has been active politically and opened a cutting-edge public elementary school for at-risk kids in his hometown of Akron, Ohio. Commissioner Adam Silver started his tenure by banning racist team owner Donald Sterling for life. I have pointed to Silver's apparent social justice commitment when talking about why I love the NBA so much and why it's better than the other American pro sports leagues.

But then, Houston Rockets general manager Daryl Morey posted a since-deleted tweet in support of the Hong Kong pro-democracy protesters last month, and the fallout surrounding the incident was a stark reminder that the NBA is not a social justice advocacy organization. It is a professional sports league that puts the bottom line ahead of everything else.

As the NBA has carefully built up a huge following in China, and as Morey's tweet threatened the league's access to the country and the wallets of its hundreds of millions of basketball fans, responses to the statement were almost universally pathetic across the league.

The erudite Kerr refused to comment on it. James' response was worse, saying Morey wasn't "educated" on the situation. (James subsequently attempted to walk back his comments.)

The NBA's first official statement in response to the tweet in Mandarin was the worst of all, clearly pandering to China's authoritarian regime. When Sens. Ted Cruz and Elizabeth Warren were united for once in their careers in condemning the league's reaction, the NBA's profits-above-people motives couldn't have been clearer.

It turns out that activism in the NBA is only encouraged when it helps the bottom line, as Billy Haisley wrote at the now-dismantled blog Deadspin:

If you were to write an extended version of the league's slogan, it might read, The NBA: Where amazing dunks and spectacular threes and also salient but generally bland comments that flatter the liberal sensibilities of the broad demographic we wish to appeal to with no concern for those we may offend (except for the people/governments we believe might actually deprive us of the money we're after) happen.

After this incident, I've been reflecting a lot on where I turn for moral leadership. I fall into the celebrity worship trap easily, searching for admirable traits in my favorite athletes that help me root for them more strongly. I might pick what team to cheer for in the Super Bowl based on how many "good guys" vs. "bad guys" each team has, making a tabulation in my head of arrests and known marital infidelities and adding them up following some arcane formula. This isn't healthy.

In David Foster Wallace's famous Kenyon College commencement address published with the title "This Is Water," the late author told his audience, "In the day-to-day trenches of adult life, there is actually no such thing as atheism." We all get to choose what we worship. Am I worshiping God or worshiping a behemoth of sports entertainment capitalism?

The compelling reason for worshiping God, or some sort of "spiritual-type thing" as Wallace puts it, "is that pretty much anything else you worship will eat you alive. If you worship money and things, if they are where you tap real meaning in life, then you will never have enough, never feel you have enough. ... Worship your own body and beauty and sexual allure and you will always feel ugly. And when time and age start showing, you will die a million deaths before they finally grieve you. ... Worship power, you will end up feeling weak and afraid, and you will need ever more power over others to numb you to your own fear."

So as the NBA games get started in earnest this month, I need to keep this warning from Wallace in mind. I will watch the games, listen to podcasts, enjoy the players' performances. But I'll work very hard to stop myself from idolizing a league or player I don't really know. I'll try to let the game be a game and find my moral compass elsewhere.

Column | In NBA's China controversy, social justice loses out to the bottom line