I attended a global meeting of Jesuit educators. Here's what I learned about our global responsibility as Catholics. 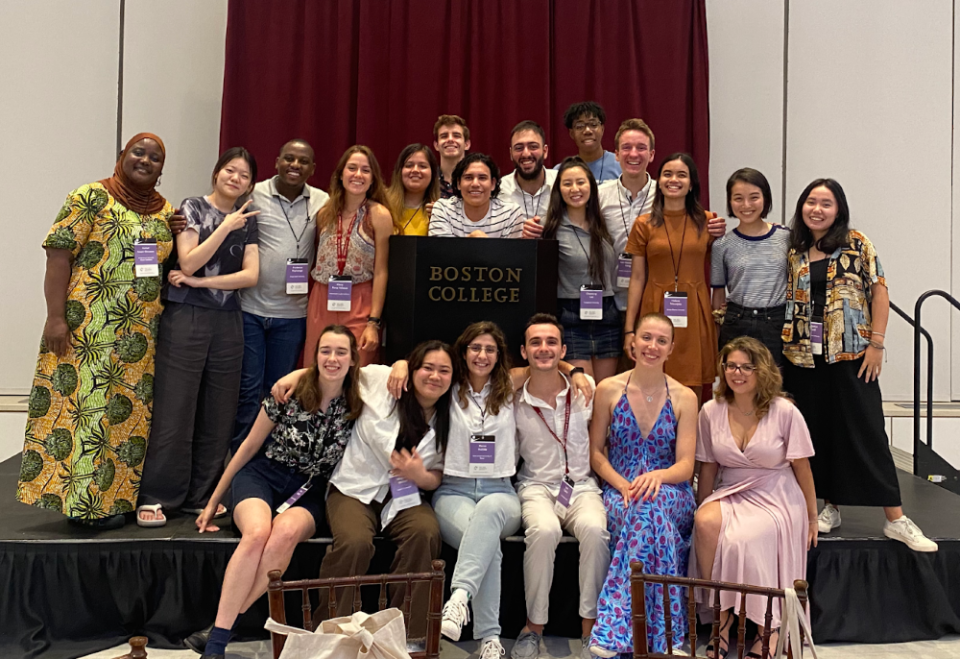 Global Citizenship Fellows met virtually for nine months, then in person at the International Association of Jesuit Universities 2022 Assembly Aug. 3-6 at Boston College. The cohort included 31 students from 19 institutions in 16 countries. (Channing Lee)

Amid division within U.S. political, social and religious life — including in the U.S. Catholic Church — it's easy to limit our Catholic experiences to what happens locally.

Yet, as I learned from a group of representatives from Jesuit colleges and universities this summer, an alternative vision of what it means to be Catholic is shaped by the responsibility of global citizenship.

At the beginning of August, hundreds of representatives from six regions around the world gathered at Boston College to attend the International Association of Jesuit Universities, or IAJU, 2022 assembly. University presidents, provosts and other higher education leaders —including many Jesuits, of course — convened to share ideas on improving Jesuit education for students around the world. The regional associations that comprise IAJU include groups from Africa, Asia, Europe, Latin America and North America.

Tasked with the mission to "promote the development of a more just and humane world for the greater honor and glory of God" through higher education, the conference's programming included presentations, breakout discussion groups and an international film contest.

As a Jesuit university student, I participated as a member of the IAJU's inaugural Global Citizenship Fellows Program cohort, among the only students in attendance. The fellowship program, spearheaded by the Berkley Center for Religion, Peace, and World Affairs at my own Georgetown University, boasted participation from 31 students from 19 institutions in 16 different countries.

As young people, we embraced our duty to share such a global outlook with our peers at home and formulated plans for how we could take direct action at our home institutions.

For the nine months leading up to the conference, we students had been meeting virtually to discuss topics ranging from global governance to poverty and inequality to climate change, in hopes of answering Pope Francis' call for a culture of encounter. Attendance at the August assembly served as the cornerstone of the program, bringing us together to discuss and experience what it truly means to be global citizens.

While I was excited to finally meet my peers in person, I was not prepared to be equally inspired by the rich programming of the conference itself. After all, the assembly aimed to enrich the capacities of those who worked in Jesuit higher education; I was merely a student. Yet the network of Jesuit universities spans the entire globe, connecting educators based on a shared faith, mission and world vision. As a result, the conference was an effective vehicle for promoting unity, reminding all participants that their Catholic identity is a global one.

At a pre-assembly workshop, Francisco Urrutia, executive secretary of the Association of Universities Entrusted to the Society of Jesus in Latin America, or AUSJAL, led a workshop called "Democracy Under Threat." Researchers from AUSJAL's Democracy Observatory Project presented their most recent report on the decline of democracy in Latin America, citing the widening gap between what democracy promised and what democracy delivered.

In a reaction panel, Jesuit Fr. Matthew Carnes, associate professor and director of the Center for Latin American Studies at Georgetown, identified how people are grappling with "desencanto" — disenchantment — with democracy and their role in such a system. Michelle Bachelet, former president of Chile and current High Commissioner for Human Rights at the United Nations, acknowledged the possible need for a new social contract.

As a student of international politics, I eagerly soaked up this new research. But why did this discussion matter at a conference for Catholic educators?

In a moving speech that brought tears to my eyes, Sophia Opatska of Ukrainian Catholic University connected these dots for me. "A free society is a moral achievement," she said, reflecting on democracy under assault in her now war-torn country. "It can't be achieved only for some but must be achieved for all and forever. It's a moral victory expected for all of us at all times." She received a standing ovation. 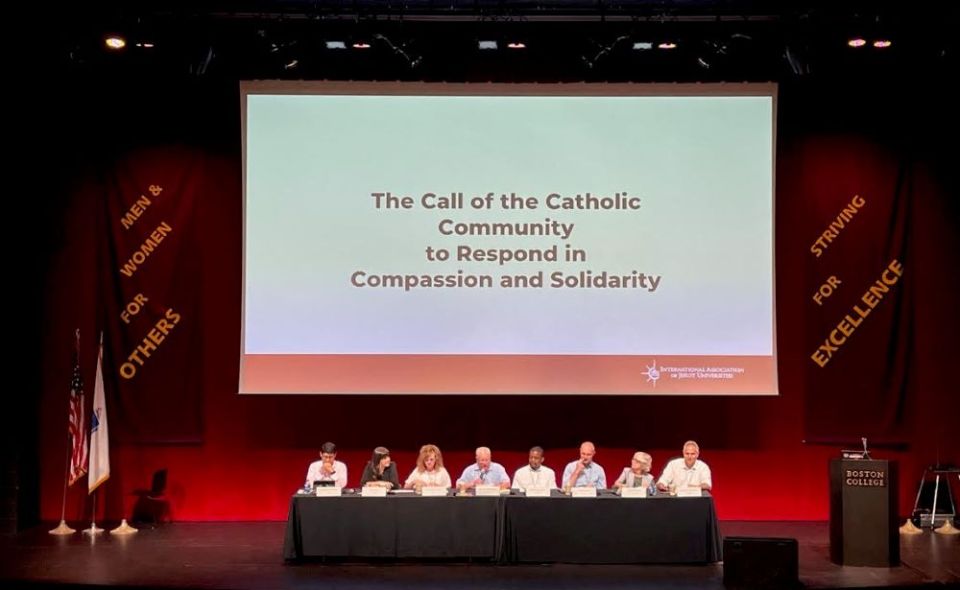 The remainder of the conference supported this notion that Catholics have a moral responsibility to support their neighbors around the world. A panel on "Solidarity with Migrants and Refugees" affirmed the responsibility of Jesuit universities to not only stand in solidarity with those fleeing from unfathomable conditions but also take direct action to serve those who have been misplaced, especially by leveraging its global network.

Similarly, the working group on Economic and Environmental Justice shared how Jesuit institutions could become "Laudato Si' universities" by adopting Pope Francis' 7-Year Journey Toward Integral Ecology and incorporating sustainability in everything from curricula to building maintenance. These presentations made me feel proud to attend a Jesuit university that is so humbly conscious of its place in the world.

Of course, my experience attending the conference was enriched by the cohort of Global Citizenship Fellows who traveled thousands of miles to reach the United States. In addition to organized discussions, we engaged in seemingly endless informal educational and cultural exchanges over meals and fun activities. Within just a few days, I learned about the flailing banking system in Lebanon, Spain's position on Catalonia's bid for independence, and the state of social, political and economic development in Nigeria. I also tried matcha Kit Kats from Japan and hot sauce from Belize.

Despite our diverse backgrounds, we bonded over a shared love for American pop songs and, more importantly, the consensus that global citizenship necessitated an appreciation for those who are different, as well as a recognition that our humanity makes us the same.

Despite the multitude of languages we spoke, we held hands while reciting the Lord's Prayer at Mass, physically affirming our shared beliefs and values. As young people, we embraced our duty to share such a global outlook with our peers at home and formulated plans for how we could take direct action at our home institutions.

If there's one lesson I learned about my Catholic identity at the conference, it's that a global faith identity bears a global responsibility. Whether it be at the macro level — promoting democratic values, facilitating interfaith dialogue and caring for our common home — or the micro level —exchanging perspectives with peers, adopting a broader lens for viewing worldwide challenges, and offering prayers for those fleeing violence and war — Catholics have an inherent interest in supporting the prosperity and livelihood of all of God's children, regardless of their nationality or country of origin. Not only do Catholics belong to a global community, but belonging to a global community also enriches what it means to be Catholic.

Unfortunately, some Catholics in the U.S. criticize Jesuits for being too "liberal" with their interpretation of Catholic theology — and too often overlook their global citizenship. For example, rather than working with President Joe Biden to advance crucial economic, environmental and social justice goals, the U.S. bishops have expended much of their energy calling for him to be barred from Communion. Some have even gone so far as to call for the resignation of Pope Francis, a Jesuit and advocate for the poor and vulnerable.

This unhealthy mixture of domestic politics and personal faith threatens the fabric of our religion's global nature. Though Catholic social thought calls on us to participate fully in society, including politically, it also emphasizes the value of solidarity among the one human family. As Jesuit Fr. Arturo Sosa, the superior general, proclaimed in his address at the assembly, it is crucial to be "collaborators in the mission of Christ" in order to live out the Jesuit value of "for and with others."

Indeed, it is in Jesus' footsteps we follow, as Catholics and as global citizens.

This story has been updated to correct the spelling of the Berkley Center for Religion, Peace, and World Affairs. 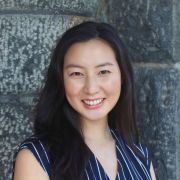 Channing Lee (@channingclee) is a student at Georgetown University's School of Foreign Service and author of Stronger Than Trust: Igniting the Faith Within Us.

Perspective | I attended a global meeting of Jesuit educators. Here's what I learned about our global responsibility as Catholics.