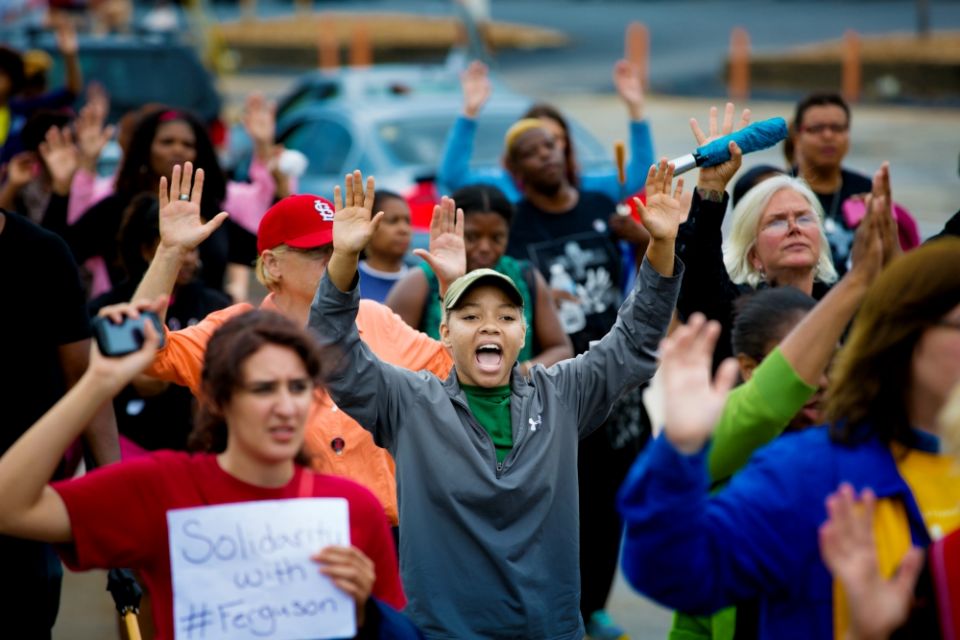 Protesters hold their hands in the air during a demonstration on Aug. 16, 2014, against the shooting death of Michael Brown in Ferguson, Missouri. (CNS/St. Louis Review/Lisa Johnston)

I'm fortunate to represent two organizations at an ad hoc St. Louis group committed to accomplishing the Forward Through Ferguson recommendations. Four of us regulars are white and over 50 while the other dozen are black and under 40. The group gives me energy and inspiration, besides the fun of meeting with 20-somethings who can argue, during an introductory exercise about enlisting superheroes in the work, over which superheroes have law degrees.

At the last meeting, the introductory question was serious: What did you do on the anniversary of Michael Brown's death? (I was at LCWR and heard Christopher Pramuk speak on black spirituals and the resistance to evil.) Two of the black women both said they took time alone that day to consider what Brown meant to them and whether in these three years they had worked hard enough to combat racism. They both said they struggled that day with feelings of guilt but came to the conclusion that to live in the now, working hard now — that is the task.

These two women were there at Canfield Drive Aug. 9, 2014, while Brown's body lay out in the street — and they stayed out in the street, one of them for five days, guarding that place where he died and by force of their presence making Mike's name resound across the country. They held vigil and marched, organized, canvassed and found their own vocations resisting racism and building a new society.

I admire these women, and their continued passion and sense of responsibility struck me deeply as I listened to them. "Ferguson" has become a watchword exactly because of the work they and 200 other committed young people took on. In the light of the white supremacy on display in Charlottesville, Virginia, I've been thinking of the Ferguson uprising more broadly.

U.S. racism and white supremacy are an infection deep in our body politic. The refusal of black activists in St. Louis to go home, their continued presence at the site of Brown's death, lanced that infection in the body politic. But it didn't drain the infection and heal it. The white supremacists among us became inflamed and the rest of us can no longer ignore this infection. Slowly, over these three years, some of us have come to see the heavy burdens our political and social system — and we as white people — place on African-Americans in all walks of life.

Ferguson lanced the infection and made us aware of it. These three years continue to show us the work we, as white people, have to do.

Opinion | The impact of Ferguson

Dancers express what it is to be black and female