It is never truly enough 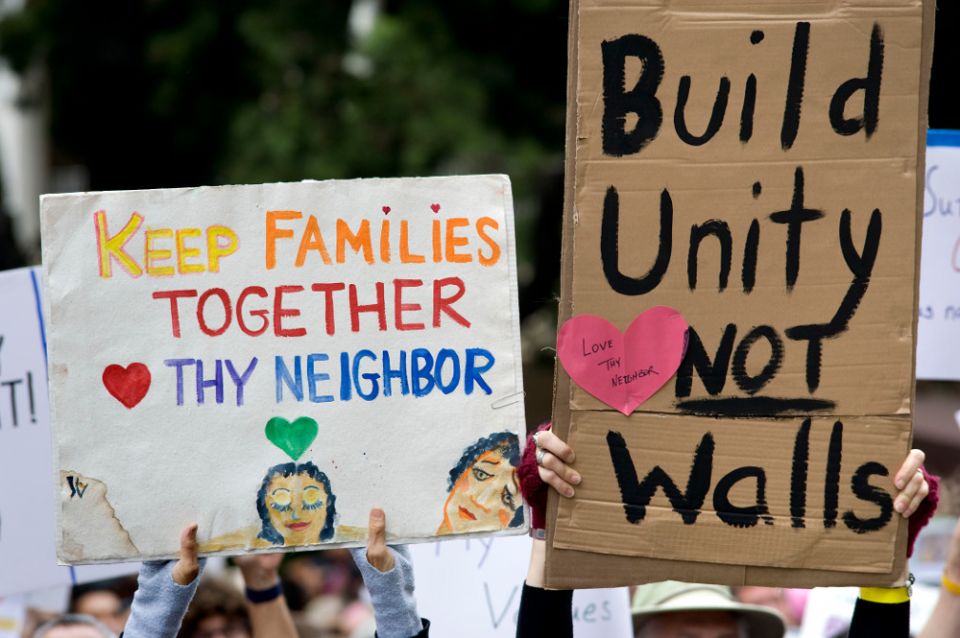 People hold signs during a rally and march in downtown San Diego June 23 to protest the separation of families detained at the U.S.-Mexico border. (CNS/David Maung)

I hear myself saying the word fine a lot lately.

It's what we say, isn't it? The expected response.

But I am far from fine. I am in the moral crisis of my life.

I feel like a German watching camps being built. Knowing full well what they are for. And doing nothing about it.

Next month will be two years since our current president was elected. His campaign promises included banning all Muslims from our country and building a wall along the US- Mexico border.

According to the FBI, hate crimes against people of color spiked the day after that 2016 election to more than double the usual daily number, and have remained elevated since.

By the following August, we watched the white-nationalist rally in Charlottesville, Virginia, turn violent and then deadly. One anti-racism protester was murdered, two police officers died, and 34 people were injured.

Two months later, in October 2017, we learned that along our border with Mexico, approximately 2,700 children were separated from their parents who were attempting to migrate to the U.S. without legal papers.

Since the January 2017 inauguration — per the president's campaign promise to target undocumented Mexican immigrants with criminal records — raids by our Immigration and Customs Enforcement (ICE) of businesses and public places like schools have quintupled.

Fewer than 25 percent of those arrested had criminal records, but were imprisoned or deported. Those families were split apart as well. When asked what was happening to the children, our then-Secretary of Homeland Security John Kelly said they were being sent into foster care, "or whatever." The estimated number of immigrant children in detention centers or our foster care system nationwide is nearly 13,000.

News reports inform us that many of these children will never be reunited with their families. The parents who have been deported have been returned in many cases to the same dangerous situations that had compelled them to seek asylum here. Those children being fostered or adopted might never see their birth parents again.

And this week, in the boroughs around New York City, it was reported by CNN that ICE posted flyers reminding U.S. citizens that it is their "civic duty to report any and all illegal aliens to U.S. Immigration and Customs Enforcement. They have broken the law." At the bottom, it lists a contact number for ICE, and then reads, "Have a nice day."

Terry Kyllo, a Lutheran minister and director of Neighbors in Faith, a Christian-Muslim coalition in Washington state, writes, "Each time [genocide] started the same: a dehumanization campaign toward a vulnerable group orchestrated by those in power. Dehumanization always is about preparing people for violence against each other."

The Boston Globe reported that when "children were taken by Border Patrol agents who said they were going to give them a bath." After hours passed, only then did the parents realize that "the kids were not coming back."

This resonates chillingly of Nazi guards in concentration camps telling Jewish mothers that they were taking their children into the showers. Of course, those showers were not created to cleanse, but to exterminate.

In the mid-1980s, when I was teaching at Loyola Marymount University in Los Angeles, our department secretary was a middle-aged lady named Rose, who had a thick German accent. One sunny afternoon, we sat together with our sack lunches on the faculty terrace.

I don't remember exactly how the conversation started, but I imagine I asked Rose how and when her family came from Germany to the United States.

I do remember that as she told me how her family emigrated here in 1946 after World War II ended, her voice became steadily quieter, until she was almost whispering, like a dying leaf detaching from its branch and falling to the ground.

She said her family had lived across the street from a concentration camp. That they had watched the Nazi soldiers and the ragged Jewish laborers build it. How when she walked back and forth between their home and school and the market, she saw the children on the other side of the fence. How at night, she and her sister would sneak out into the dark and lob apples over the barbed wire into the camp. How if they had been caught, they and their family could at the least have lost their home and business, or at worst, been imprisoned or executed.

Her eyes filled as she told me, "But, it was not enough."

Almost 40 years later, it was clear that her feelings of guilt and helplessness were as sharp as they had been when she was 15 years old.

I am a busy lady. I spend the bulk of my time and energy caring for our adult disabled son Nick and our youngest grandchild Mary. I am also a Catholic. The lyrics from the hymn "Whatsover you do to the least of my brothers, that you do unto me" — based on Matthew 25:40 — seem to be embedded in my DNA and course through me many times each day.

So, I try to do what I can when I can for those I perceive as vulnerable and dehumanized. I go to Mass. I pray. I donate some money. I donate some stuff. I sign some petitions. I share information on social media. I vote.

But I truly fear it will be, as Rose said all those years ago, not enough.

Column | It is never truly enough

Your thoughts on the crisis at our southern border

At Texas center, bishops join in a warm welcome for recent arrivals

I was a stranger, and you took my child from me