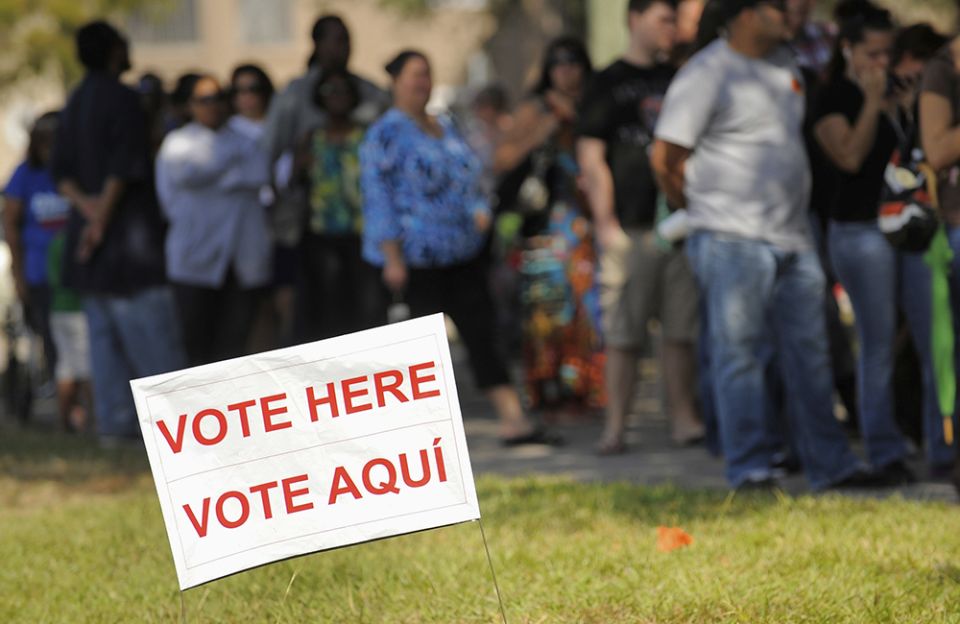 A sign in English and Spanish is seen as people wait to vote in 2012 outside a polling place in Kissimmee, Florida. (CNS/Reuters/Scott A. Miller)

Exactly two weeks from today, on Oct. 6, I will be delivering a talk on Vatican II at St. Ignatius Parish in San Francisco. The talk is part of a wonderful series they are sponsoring on Vatican II and how it remains the benchmark for renewal of the Catholic faith. Five additional speakers, all of them esteemed scholars (not sure how I made the cut!), will speak on the four dogmatic constitutions the Council issued. Massimo Faggioli will conclude the series on Dec. 8. If you are in the Bay area, please come and join us.

In The New York Times, David Leonhardt looks at some of the reasons that Hispanic voters are less and less likely to vote Democratic than they were just six years ago. They are working-class voters who do not share some of the Democrats' more extreme positions on social issues and who also feel the brunt of economic challenges. The demographic assumptions that were common among Democrats 10 years ago have fallen by the wayside.

The Washington Post ran a poorly reasoned essay about abortion this week in which Kate Cohen started to make an important point about the medical necessity of some abortions to save the life of the mother, but then suggested that fact was enough to evaluate the morality of the entire issue. She writes, "Unless you believe that a pregnancy should never be deliberately ended — and few people do — abortion should be treated as what it is: a medical procedure." Huh? Of course, abortion is always a medical procedure and most Americans think it should be permitted when the life of the mother is threatened by continuation of the pregnancy. Most laws restricting abortion, here and abroad, include such an exception. Cohen goes on to argue that "insisting that abortion should be 'safe, legal and rare' might have been smart political strategy, but it has never made logical sense." Actually, there is no better political and legal logic than that which honors the moral sensibilities of the people and their best moral and intellectual traditions.

At CNN, a report on noted authors who are joining the campaign to stop book banning. As Levar Burton of "Reading Rainbow" fame said: "I'll be absolutely candid and honest, it's embarrassing that we are banning books in this country, in this culture, in this day and age." So it is. I was especially gratified to see people defending the great Salman Rushdie who was attacked and stabbed by a fanatic this summer.

Relatedly, from The New York Times, Pamela Paul writes about the more subtle forms of censorship afflicting the publishing industry. "As many top editors and publishing executives admit off the record, a real strain of self-censorship has emerged that many otherwise liberal-minded editors, agents and authors feel compelled to take part in," she writes. This censorship comes mostly from the left and it is just as repugnant as the more explicit variety found on the right. People who are afraid of controversy should not be in the publishing business. Period.

Your thoughts on Shia LaBeouf's talk with Barron

Sowing the seeds for lots of future trees

To cultivate relationships, tell your story