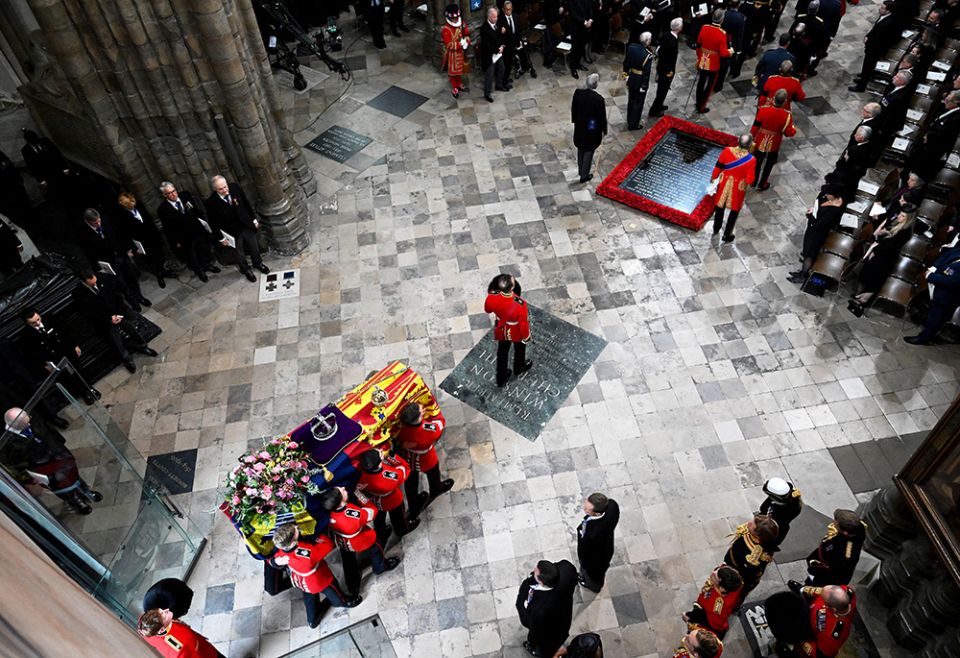 Pallbearers carry the casket of Queen Elizabeth II with the imperial state crown resting on top into Westminster Abbey during her state funeral Sept. 19 in London. (CNS/Gareth Cattermole, pool via Reuters)

The Washington Post reports on the many Republican candidates across the country who have refused to say they will accept the election results. I don't know about anyone else, but my parents taught me I was only allowed to play a game if I learned the rules and agreed to them in advance. These efforts to undermine democracy are pernicious in the extreme.

Also in the Post, columnist Jennfier Rubin credits Labor Secretary Marty Walsh and his deputy, Julie Su, for their role in mediating negotiations that successfully averted the railroad strike last week. The credit is well placed. Walsh has recently been the subject of anonymous attacks from Democratic Party operatives. Could it be they recognize in him someone who could unite the party behind his leadership in a future presidential candidacy?

At Politico, the incomparable Jack Shafer looks at Florida Gov. Ron DeSantis and his latest, brutish stunt of sending desperate migrants to Martha's Vineyard. The ambition, so raw, is indifferent to the dignity of anyone who gets in its way. Unlike former President Donald Trump, DeSantis is knowledgeable about history and political theory. He must know what he has done is reprehensible, but if a person has lost his ethical core, it doesn't matter.

Kudos to NBC News and specifically Chuck Todd for focusing on the role of "persuadable voters" in the upcoming midterm elections. They note that these voters, who do not reliably support one party or another, are torn this year, pulled in different directions on different issues. One thing is clear: A plurality of them live in the outer suburbs, and they are currently leaning to the GOP, mostly because of economic concerns.

Rolling Stone reports that Facebook is barring promotional material related to a serious movie about the Holocaust. Why? Because the movie's title, "Beautiful Blue Eyes," violates the company's policies on race that forbid "direct or indirect assertions or implications about a person's race." Next time readers worry I am alarmist when I assert that the left's reigning orthodoxy on racial issues really can go too far, remember this episode. A movie about the Holocaust is being banned from advertising on Facebook. Let that sink in.

At the Classicfm website, a backgrounder on the musicians who serve in music ministry at Westminster Abbey. The best argument for monarchy is the magnificent quality of the music at their public liturgies. Among the hymns sung at yesterday's funeral was "Love Divine, all Loves Excelling" and it was sung to the tune "Blaenwern," which is a far better fit than the tune "Hyfrydol" to which we usually sing those words in the United States. Note to my friends: I have requested that hymn to "Blaenwern" for my funeral, so make sure you learn the tune!