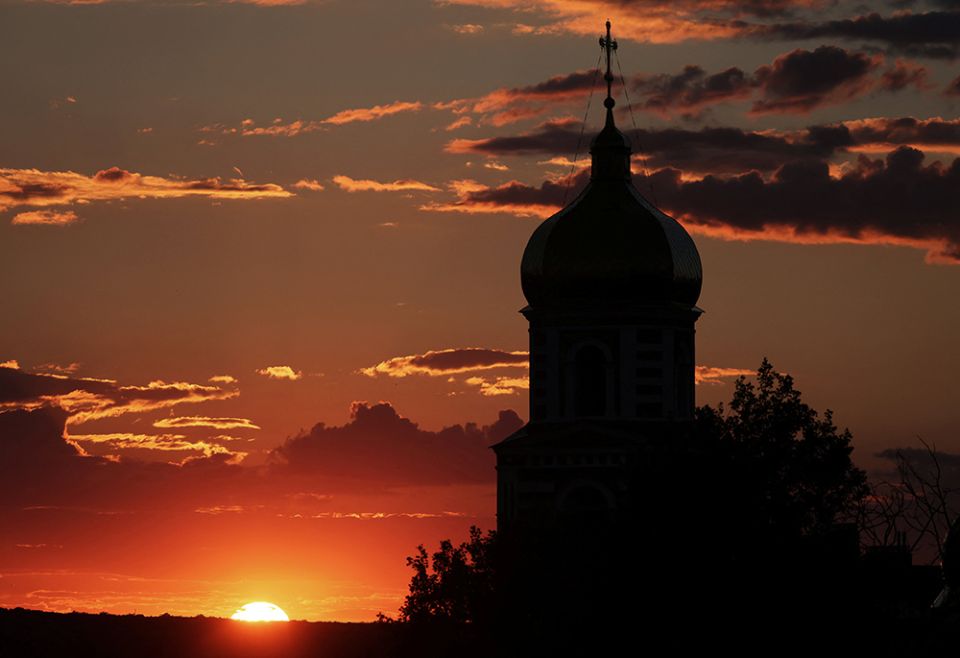 A church is seen at sunset July 12 in Kharkiv, Ukraine, during the Russian invasion. (CNS/Reuters/Nacho Doce)

The Washington Post reports on the collapse of Russia's military in the Kharkiv region of Ukraine. It is stunning and shows how stretched the entire Russian war effort is. Even some of Putin's supporters are reportedly disgusted with the situation and demanding change. Now is the time to deliver whatever coup de grace is possible. This war will only end when Russia withdraws behind its own borders and Putin hands over the reins of power to someone else.

At La Croix, historian Massimo Faggioli of Villanova University looks at the recent meeting of cardinals with Pope Francis, and why this meeting did not produce the kind of fireworks the 2014 one did. He notes that in the intervening years a "false dichotomy" between doctrine and pastoral practice has emerged that only kicks the can down the road. "The problem is that, during this pontificate, those who strongly disagree with Francis — and even those who support him — have repeated this slogan: 'pastoral change, yes; doctrinal development, no'," writes Faggioli. "But no one can explain precisely what this means because it is a false dichotomy. In the history of the Church, pastoral change has always implied and caused doctrinal development and vice-versa."

At Politico, contributing editor Ian Ward interviews Michael Tomasky, editor of The New Republic and Democracy, who has a new book out arguing that President Joe Biden has done a lot to embrace a new progressive economic paradigm that steps away from the neoliberal economic paradigm ushered in by Ronald Reagan in the 1980s. I hope Tomasky's optimism is well placed, but the failure of the U.S. Senate to take on Wall Street when it came to taxing hedge funds shows how much work needs to be done, starting with fielding a progressive challenger to Arizona Democratic Sen. Kyrsten Sinema who singlehandedly fought to retain the carried interest loophole that Wall Street wanted.

The wall-to-wall coverage of the death of Queen Elizabeth II was a bit much for my Irish tastes, but one article in The Washington Post recalled an incident I had not known. In 1957, the queen came to Washington on a state visit and, among other things, visited the Giant supermarket on Queens Chapel Road in Hyattsville. For at least two generations of Catholic University of America students, including mine, that was the closest grocery store to campus. Who knew?

The discussion about empire and decolonization occasioned by the death of Queen Elizabeth II has been interesting, mostly because it corresponds to academic reality more than any reality on the ground. One essay, in The New York Times, by Harvard's Maya Jasanoff, warrants a specific rebuttal. Jasanoff writes of the queen, "She represented a living link to World War II and a patriotic myth that Britain alone saved the world from fascism." There is no serious argument that Britain saved the world alone, nor was there at the time. The article to which Jasanoff links unpersuasively cherry picks a few quotes from Winston Churchill that obscure Churchill's acute awareness of the aid the island nation got from its empire abroad. More importantly, it is true that from June 1940 until June 1941, the British empire really did stand alone in the fight against Nazism. That is not a patriotic myth. In the end, the Soviet army faced the brunt of the Nazi war machine, but for one year, Britain and its empire stood alone.

In The Washington Post, classical music critic Michael Brodeur looks at the legacy of Leonard Bernstein's "Mass," which was commissioned to open the Kennedy Center for the Performing Arts in Washington. The work premiered in 1971 to decidedly mixed reviews and will be restaged this week to commemorate the center's opening. I attended the 1981 restaging of "Mass" on the 10th anniversary of the center's opening and have loved the work ever since. I especially loved the production put on by the Catholic University of America in 2003 for the opening of the school's Pryzbyla Center.

Pope calls for end to horror, madness of war, on anniversary war in Ukraine