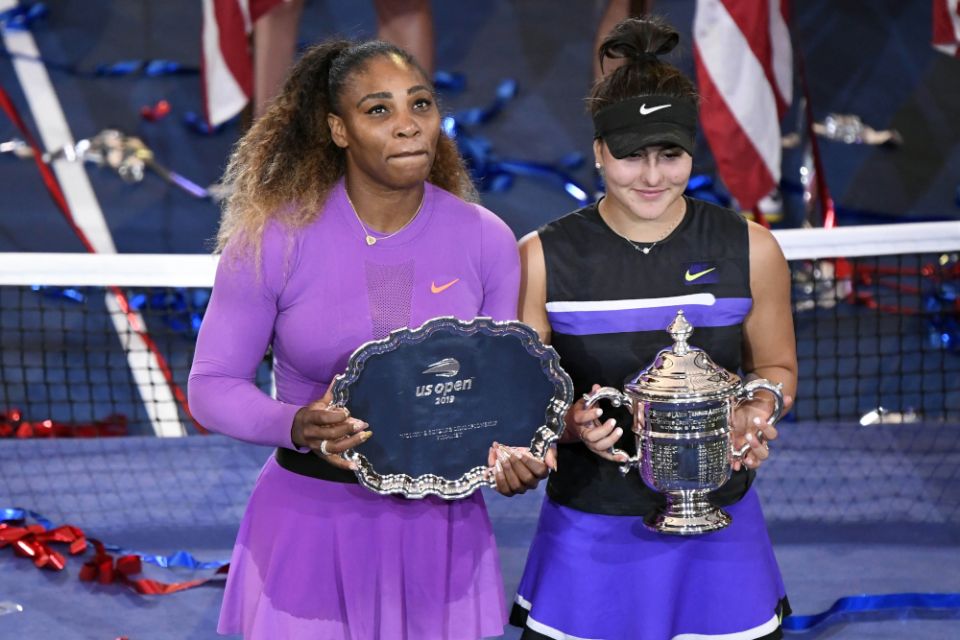 Serena Williams of the United States and Bianca Andreescu of Canada pose with the second-place and first-place trophies after Andreescu won the women's singles final on day thirteen of the U.S. Open tennis tournament Sept. 7, 2019, at Arthur Ashe Stadium in Flushing, New York. (CNS/USA TODAY Sports via Reuters/Robert Deutsch)

In The New York Times, tennis legend Billie Jean King pays tribute to tennis legend Serena Williams. In my lifetime, women's sports have exploded, both in the number of women and young girls engaged in competitive sports and in the quality of the game. It did not seem remarkable last week when the primetime game in the largest stadium at the U.S. Open featured a women's match. Williams has been the dominant force in women's tennis and she deserves all the accolades being showered upon her as she retires from the sport.

From Channel News Asia, a report on international mafia syndicates smuggling sea cucumbers, depleting the fisheries of these most valuable of marine animals. Sea cucumbers are critical for the growth of coral, and the process of nutrient recycling in the oceans depends upon them. But organized crime can make as much selling them as they do from selling methamphetamines.

At The New Yorker, staff writer Masha Gessen considers the life and legacy of Mikhail Gorbachev. "His was the quintessential life of an apparatchik," she writes. I remember well when the coup against him sought to restore the Soviet Union in August 1991, opening bottles of champagne when the coup failed, but toasting Boris Yeltsin, not Gorbachev. As Gessen writes, "Gorbachev resigned his post as the head of a country that no longer existed." Whatever his limits, he had a decency about him that the current leader of Russia utterly lacks.

At Fortune, reporter Will Daniel considers the way President Joe Biden's plan to forgive some student loans might have the perverse effect of incentivizing colleges and universities to charge higher tuition. The more immediate effect of Biden's decision is to give the Republicans a populist economic and cultural bat with which to beat the Democrats. It may not matter in November, but it is still a bone-headed political move and profoundly unjust to expect non-college educated persons, who earn less because they lack a college degree, to shell out money for those who did go to college.

At Fox News, Bishop Robert Barron, having been installed as a diocesan bishop in July, is already discussing projects that have nothing to do with governing the diocese of Winona-Rochester, Minnesota. He wants to found an order of priests and institutionalize his Word on Fire Ministry. Why not get to know the people of God entrusted to his care? Barron is talented, to be sure, but he seems not to care about his day job.

What's next in the ongoing struggle between the bishops and Obama?