The meaning of Michael Brown 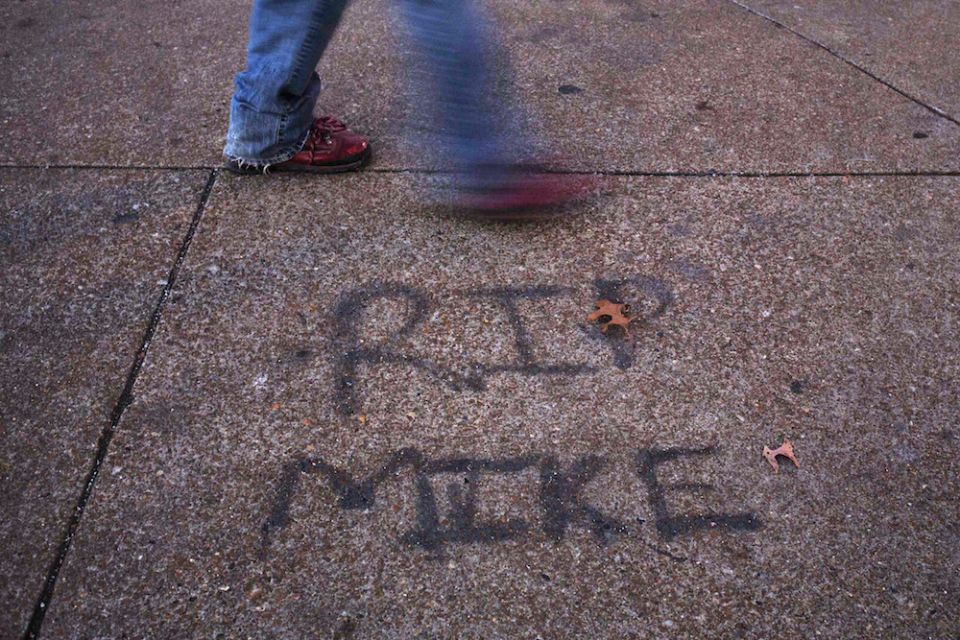 A memorial painted on a sidewalk in Ferguson, Missouri, November 19, 2014, near the site where Michael Brown was shot and killed by a police officer (CNS/Adrees Latif, Reuters)

The word "Ferguson" is a flash word. Whenever I speak or write about Ferguson, Missouri, emotions erupt. In my last blog, I was writing about women I admire who are committed to carrying out the recommendations made by the commission, Forward Through Ferguson, and how much I admire the work of those women — and that the Ferguson Uprising lanced the wound of white supremacy in our body politic.

The couple dozen comments to that blog attack Michael Brown, defend the policeman who shot him, call Trump voters racist, and blame liberals for police deaths. Oh, dear. It's not helpful conversation, and it's beside the points I was making.

But the comments do lead me to say why I think Mike Brown is important. He was an ordinary 18-year-old. He had graduated high school and was set to start community college the next week. He had never been arrested. He may have been trading marijuana for cigarillos at the corner store — or he may have stolen a handful of them. He strong-armed a clerk. A customer, not the proprietor, called the police. Mike was walking down the middle of a two-lane road through a housing development. A police officer, Darren Wilson, pulled up in his police car and told Brown and a friend to get off the street.

Did Brown deserve to die? Did Wilson deserve to be fired from the police force? Opinions differ.

I think if Brown had been white, he would not have been killed. And I think he has become a symbol to the black community exactly because he was imperfect, a struggling human being. His death awakened many people in St. Louis and around the United States to the need to stand in opposition to a racist system. We woke up because of the young men and women who kept vigil for months at the site where Mike died. They said, "This is wrong," inspiring many more to stand up in opposition to racism.

A nun I know said, "It's too bad this happened around Michael Brown." I couldn't think of anything to say back to her. Did she think Brown deserved to die because he was imperfect? Did she think his life was not worthy of a protest over his death?

The grand jury and Department of Justice both concluded that Wilson had a right to shoot Brown because Wilson was in fear for his life. Wilson, who was a little bigger than Brown, compared Brown to the Incredible Hulk. It's not unusual for whites to magnify the threat they see in black men.

Figuring out what Ferguson means requires asking why Brown's death moved the two women I wrote about last week to change the direction of their lives. It requires listening to people and thinking about what they say. It requires reading the Ferguson Commission report as well as the Department of Justice report. For many of us, the death of Mike Brown demanded that we too change the direction of our lives. If the word "Ferguson" makes you uneasy, I ask that you, too, listen to the people who were changed by Brown and then think about what they have said.

Opinion | The meaning of Michael Brown

Excerpt: 'In the Closet of the Vatican'