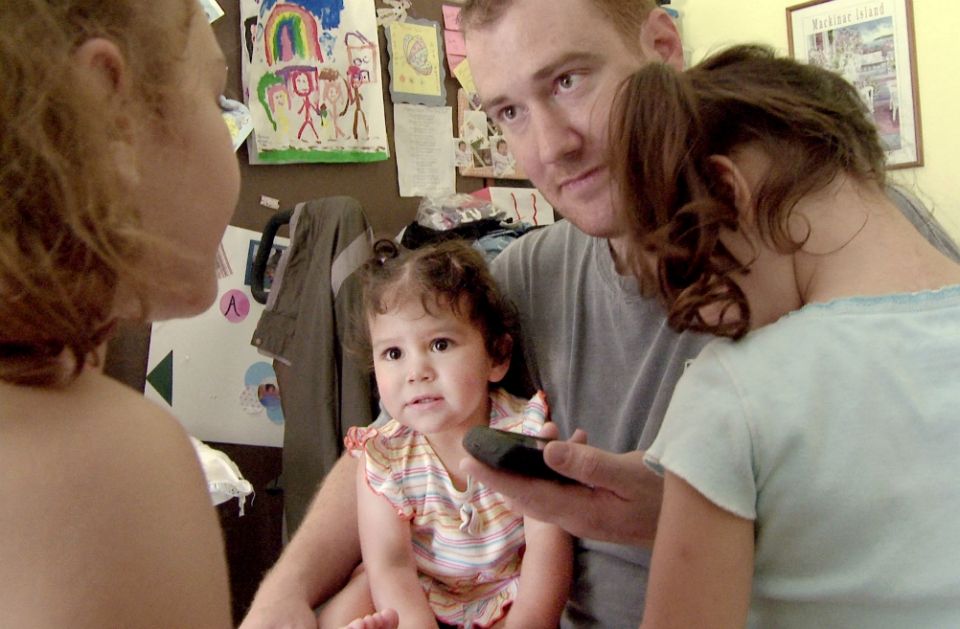 Autumn, Annalis, Adam and Ava speak on the phone with Cindy in the documentary "The Sentence." (HBO)

In 2008, there was an ominous early-morning knock on the door of the Shank family home in Lansing, Michigan. Cindy, mother of Autumn (6), Ava (2) and Annalis (under a year), and wife to Adam, answered the door. Federal agents were there to arrest Cindy on conspiracy charges related to the time she was a live-in girlfriend to a drug dealer named Alex.

After Alex's murder, state and federal charges were brought against Cindy. As the girlfriend, she was charged with the same offenses that Alex would have faced. Those charges were dropped, however, because she refused to accept plea deals for crimes she did not commit.

But the feds persisted. After her arrest, they offered a plea deal — 13 years for pleading guilty. Cindy refused because she did not commit the crimes. She was found guilty at trial and received a mandatory sentence of 15 years. She admits she knew about Alex's activities and she did not report them.

The documentary "The Sentence," by Cindy's brother Rudy Valdez, opens with scenes of Adam and his daughters talking to their mom on the phone. This scene is repeated over as the years pass.

"The Sentence," winner of the Audience Award at Sundance in January, focuses on the mandated sentence that Cindy received and how the severity of it affected her children, her marriage and her family.

But it is impossible not to consider that she was arrested six years after Alex was murdered and for his crimes; she did not commit any of them. With all of the federal crimes committed in the U.S., the feds worked all those years to arrest Cindy because she knew about his activities and didn't say anything — this is contrary to law. (Punishing "girlfriends" for actions committed by their boyfriends is being reviewed but so far nothing.) Cindy accepts responsibility for this.

This plainly told but compelling film is also an indictment of the prison industrial complex in the United States, which warehouses inmates for profit, squanders resources and costs taxpayers billions.

Cindy's journey, her determination to do well despite everything, is a human triumph.

And the U.S. prison mill just keeps on grinding away.

[Sr. Rose Pacatte, a member of the Daughters of St. Paul, is the founding director of the Pauline Center for Media Studies in Los Angeles. "The Sentence" premiered on HBO Oct. 15.]

Lobbying in lieu of ashes: a pushback against long prison sentences