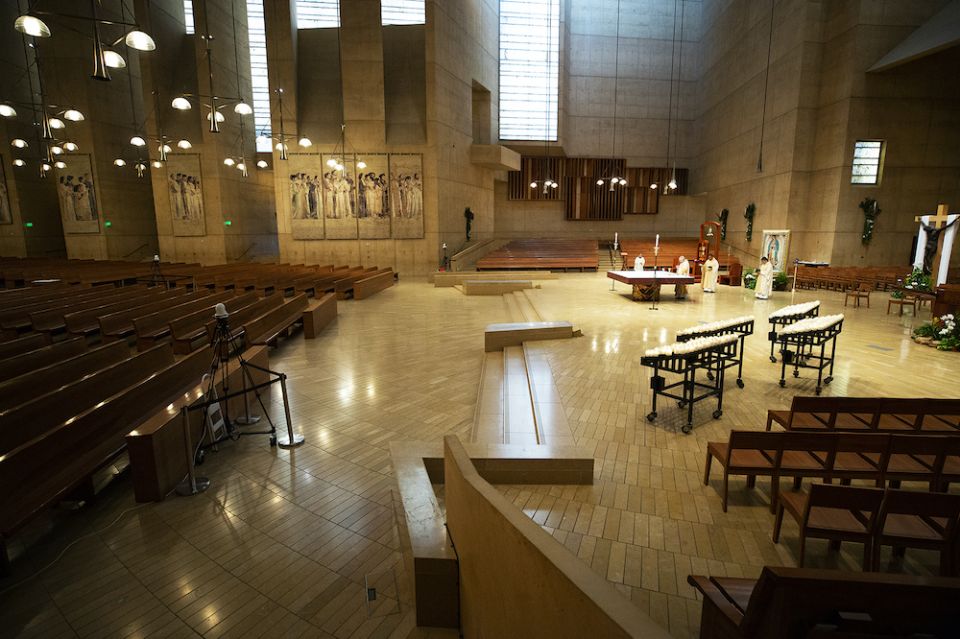 Archbishop Jose Gomez of Los Angeles, president of the U.S. Conference of Catholic Bishops, celebrates Easter Mass April 12 from the Cathedral of Our Lady of the Angels in Los Angeles. (CNS/Vida Nueva/Victor Aleman)

At one level, it almost borders on cruelty to hand on to someone you highly regard as a friend and colleague the leadership of a small, non-profit news organization in the middle of a pandemic that's tanking the economy. But that's what's happening and the next version of this column will be written by Heidi Schlumpf, our distinguished national correspondent and the next executive editor.

No one planned that this transition would happen mid-pandemic, a silent, invisible, life-altering tsunami. But I can't imagine anyone better suited to take the helm mid-storm. Schlumpf's capacity for high-level reporting and engaging prose has been on display in these pages in her work as a columnist and in reporting that has included politics, spirituality, ethics, ecclesial intrigue and a number of investigative series on how the rightwing and its money is shaping the Catholic narrative for the wider culture. NCR's more recent coronavirus coverage provides further example of her talent and intelligence, as well as her level-headed leadership in a crisis. And she's done that directing of staff and correspondents working remotely all over the globe while she and her husband, Edmund, and her children, Sam and Sophie, shelter in place in their home in Chicago.

When I returned to NCR a year and a half ago on an interim basis, I said to the staff that I was not the future, that I looked forward to re-retiring, as it were, that I considered myself a bridge to whatever comes next. The bridge has ended in a very good place at a very strange moment. Give the new editor a warm welcome and as much support as you can muster. Welcome, Heidi.

The incoming editor is certainly aware that things at NCR, given what it is and given its history, can become somewhat rough and tumble at times. It is fitting that such was the case just a few weeks before I take my leave of this spot. I approved two columns, one by Mary E. Hunt, a feminist theologian who is co-founder and co-director of the Women's Alliance for Theology, Ethics and Ritual (WATER), in Silver Spring, Maryland. The other, a portion of which contained a searing dismissal of Hunt's point of view, was by Michael Sean Winters, who writes five times a week, three original columns and two compilations of links to other material with considerable commentary. I consider him one of contemporary Catholicism's most important and prolific writers, complex in a way that most of us could never manage. He defies labels.

I consider both friends of long standing. I first came to know Hunt's work and organization decades ago, soon after I became news editor at Religion News Service. She and her organization have been making the case for greater roles for women in the church for 35 years.

I've known Winters for a shorter time, but have worked closely with him during his NCR career. Winters makes me and — if my email traffic is any indication — a lot of others re-examine our presumptions and certainties quite often.

I've been at this long enough to have anticipated, in this recent go-around, what eventually happened. The onslaught from right of center and others attached to Catholic institutions of one sort or another holds that Hunt had dissed the pope in a moment of profound vulnerability as he celebrated Mass and delivered his Urbi et Orbi address virtually alone and that she derided male priesthood at a time when so many were dying caring for the sick. From the left and from many women, I heard that Winters is an unkind lout, an anti-feminist in debt to patriarchy and hierarchical control and should be restrained.

I know better of each, but nuance, like deep change, is often a long-haul enterprise that takes a back seat in the heat of opinions strongly held and expressed by able writers.

I raise the matter for two reasons:

First, because such indelicate moments on our pages, while not frequent, will occur again. Independence of the sort NCR enjoys is worthless unless it is put to use in the deep digs we do and in publishing the voices and the questions that may be unsettling. While some bishops have openly complained about NCR over the years, I have been amused at others who, from time to time, have sought me out for a sotto voce "attaboy." "Keep doing your work," they would say. Or "Yes, you're asking the right questions." Or, "You guys are important. You keep us honest." Not one of them, of course, would admit such publicly or ever pen an endorsement. Just a wink, a nod and a "keep at it."

Be assured, Schlumpf will do exactly that.

The second reason is because, no matter what the defense of the ecclesial status quo or the counsel from some quarters to take things incrementally or the familiar (and rather laughable) line from male clergy that "this really isn't about power, it's about service," women are not going away. Period.

Several days after Hunt's column appeared, we published a piece by St. Joseph Sr. Christine Schenk, headlined, "Women demonstrate what the priesthood of Jesus truly means." Schenk is co-founder of FutureChurch, author of To Speak the Truth in Love: A Biography of Theresa Kane, RSM and Crispina and Her Sisters: Women and Authority in Early Christianity, and an NCR board member. Much as Hunt did, Schenk argues that the current moment, with its televised liturgies, has shown in a dramatic fashion that no women are involved in leadership of the Catholic community and that many Catholics have access to other means of community and worship.

The issue is not merely about ordination. We don't need gender inclusive clericalism. (Though I've met bishops, some of the same mentioned above, who would say things like, "I'd ordain a woman tomorrow if they gave the go-ahead.") Nor is it about fracturing the community further into discrete units. Congregationalism isn't an answer. Rather, the discussion at its best should get at how we transform who we are and how we act as a community. And the deepest part of those questions involves transforming relationships at all levels of the community.

When I take a long-haul view of the history of NCR, I often think of the Book of Acts, grateful there were no first-century public information specialists because, as I wrote in The Emerging Catholic Church, "We never would have gotten the good stuff" about the big fights over who gets in and who's kept out, about what we are permitted to eat. I, for one, am glad the answers to those questions were "everyone" and "everything." 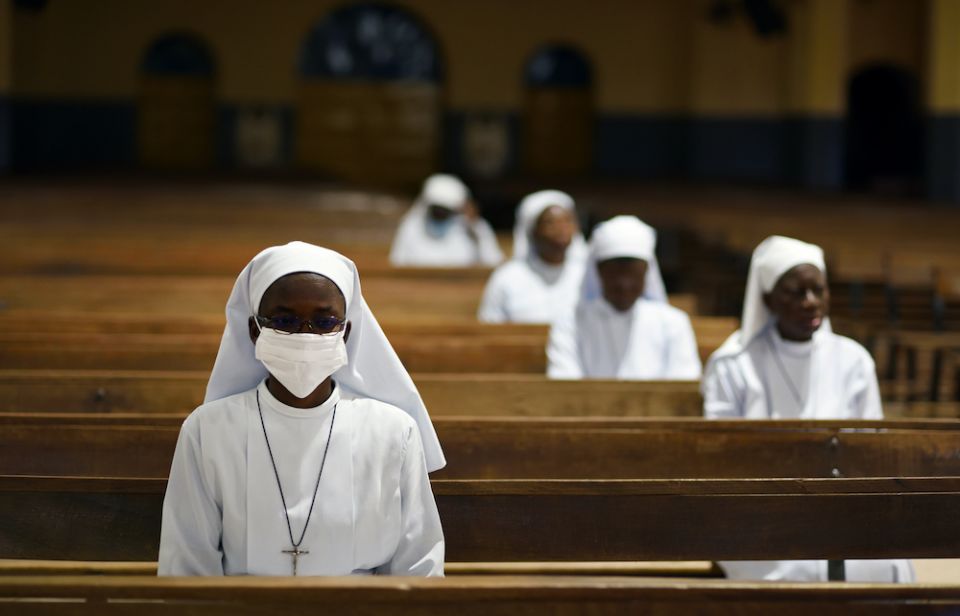 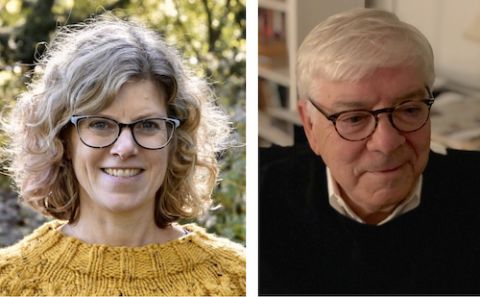 I'm glad those early writers were more interested in truth than image and that they didn't edit out details of an early leader who was on the wrong side of those answers before changing his mind, who traveled the long path from denying Jesus to martyrdom. Their successors in the modern era — and not just ordained — have imitated him in kind. So many who engaged in covering up the sex abuse crisis engaged in a betrayal of the flock that is tantamount to a denial of Jesus. Others — and names such as St. Óscar Romero and Fr. Stanley Rother, Sister of Notre Dame de Namur Dorothy Stang and the four church women murdered in El Salvador, the murdered Jesuits and their housekeeper and her daughter and Bishop Juan Gerardi, assassinated in neighboring Guatemala for gathering the truth — are among those whose adherence to the heart of the message have taken them to martyrdom.

The early church didn't alter what the disciples had seen and heard. But what they understood flowing from that experience matured and grew over centuries and continues to in our time. In my 36 years of covering the church, 26 of them at NCR, a great deal about the church has changed. Today's women, descendants of the first to the empty tomb and the first to proclaim the good news, are yet waiting for the men of today to have the courage the Master showed in defying cultural norms of his day.

It has been a grace of my life to be associated with this spunky and essential publication. It, too, believes the community deserves truth over image and can withstand both betrayal and martyrdom.

*The top image's caption has been corrected. The photo is of Archbishop Jose Gomez of Los Angeles, not New Orleans Archbishop Gregory Aymond.

A version of this story appeared in the May 1-14, 2020 print issue under the headline: A good place, a strange moment .

When Fran saw us, she saw only God