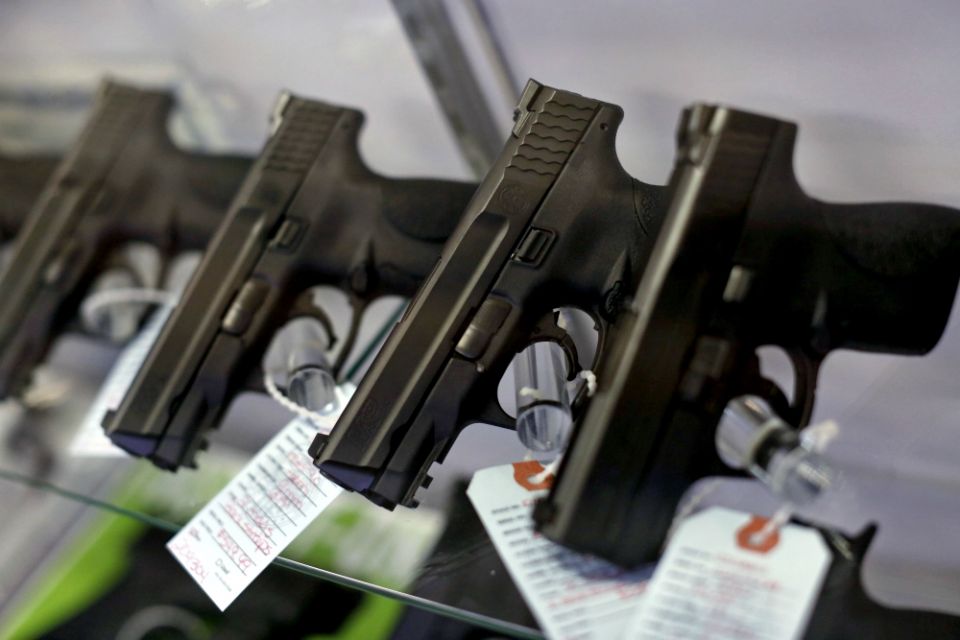 Handguns are seen for sale in a display case at Metro Shooting Supplies in Bridgeton, Missouri. (CNS/Reuters/Jim Young)

With the rarest exception among pure pacifists, churches in America are so immersed in the nation's gun culture that they have no distinct voice in the ongoing clash over firearms control. They are as contradictory and confused as most other institutions, despite having the resources to provide valuable alternatives to the continuing frenzy.

The chief cause for this default is that so many churches are caught in a bind between internal cultures — leaders who reflect alarm over gun violence and side with some aspects of gun control, and grassroots congregants who have reason to believe Christian teachings support gun possession and use. This gap between two mindsets stymies unified approaches to the problem.

Similar gaps yawned when religious leaders took positions on racial justice, the Vietnam War and gay rights. Bishops and other authorities often were unable to convince local congregations that there was anything unchristian about practices such as segregation and unquestioned patriotism. Culture and religion were for the most part intertwined.

Two Catholic parishes in Pennsylvania illustrate the dilemma. News broke recently that the Allentown Diocese had stopped a parish in the coal-region town of Minersville from raffling off guns at an April 6 "Sportsman's Night Out" dinner and fundraiser. A woman from the town had protested the event as an affront to survivors of the high school massacre in Parkland, Florida. The reply was quick: "The diocese does not believe that the churches in the diocese should be offering firearms as prizes." No further explanation was made public.

Until then, the parish had no apparent reason to believe the annual sportsman's dinner was anything unusual or out of the ordinary. Earlier in the month, the U.S. bishops had once again voiced solid support for aspects of gun control in light of the Parkland shootings, but it didn't come up in the Minersville case.

The bishops' statement insists on a ban on assault weapons and limits on gun purchases, and promotes greater penalties for gun trafficking. "Guns pose an enormous danger to the innocent when they fall into the wrong hands," the bishops said.

While condemning assault weapons and supporting tougher restrictions, the bishops retained some leeway by leaving aside questions of whether ownership and use of guns were themselves morally justified.

St. Michael the Archangel in Minersville, therefore, may have decided the raffle wasn't in violation of the bishops' specific intentions. The scheduled speaker at the dinner, a priest described as an outdoorsman, expressed no reservations. If there was something starkly immoral about raffling off guns or trading in them, it evidently didn't occur to organizers of the dinner.

While the Allentown Diocese's action might have been sparked as an effort to prevent bad publicity, the raffle either didn't seem to break church rules or indicated those rules' unenforceability. Ironically, a nearby parish, St. Nicholas Ukrainian, which is part of the Ukrainian Archeparchy of Philadelphia* and not part of the Diocese of Allentown, had raffled an assault rifle, the only designated scourge of the bishops, at an event of its own, without a desist order from the archeparchy.

Related: US bishops back assault weapons ban, are leery of arming teachers

While some Catholics do reject guns on the faith-based convictions, the church teaches no such obligation.

Gallup polls from 2007 to 2012 found that 25 percent of U.S. Catholics said they owned guns compared to 36 percent of Protestants. Catholic personal ownership of guns was below the overall public average of 30 percent (14 percent more Americans said gun owners existed in their households). The rate among weekly churchgoers (32 percent) was slightly above average.

Public Religion Research Institute in 2013 found Catholic households where at least one person owns a gun at 31 percent and that Catholic self-described “pro-life” advocates were twice as likely as Protestant counterparts to support gun control (61 percent versus 33 percent).

Though there are efforts by some Catholics to outlaw guns or severely restrict them, no large-scale protests against the Second Amendment as a right to own guns have emerged among American Catholics to challenge the widespread view that it legalizes personal gun ownership. A general acceptance of guns as necessary and useful is assumed to be relatively common, as is the probability that at least some church members own guns.

The virtue of guns is therefore tacitly taken for granted. The belief that firearms are licit is deeply ingrained and the church implicitly honors that.

Whether that agrees with Gospel values is open to debate, of course, but there can be little doubt that on a pastoral level there is a pervasive view among laity that weapons have a God-given purpose, painful as the results can be.

The church's centuries-old support of just war permits force in the service of justice. The U.S. bishops' pastoral letter on peacemaking outlaws first-strike nuclear weapons but doesn't totally rule out the weapons' use. The hierarchy accepts gun use by police, soldiers and hunters. It doesn't oppose the National Rifle Association's interpretation of the Second Amendment. Pacifism and peacemaking movements exist alongside this tradition, but controlled use of firearms and violence has long been a mainstay in the church's thinking.

Therefore, wouldn't it be reasonable to assume that the same parish that condones guns as having a moral purpose shared by rank-and-file parishioners, rich or poor, would condone a raffle as a legitimate source of an acceptable object? Though in this case the diocese didn't appear to ask laypeople to offer their opinions, shouldn't the attitudes they have naturally imbibed from going to Mass count for something? Would it have been OK to hold the raffle at a less conspicuous setting or did diocesan officials wince at associating the parish itself with a cause for which they are ambivalent themselves?

Though the woman who complained about the gun raffle did it in the name of the Parkland tragedy, there was no hint that participants at Sportsman's Night were any less sympathetic to its victims or such wanton use of assault weapons. Assumptions that they were callous or unfeeling surely slighted Minersville parishioners.

More harmfully, perhaps, is that their morality of guns hadn't been recognized or elicited. The minds of the reform-oriented bishops had not engaged the minds of those existing within the church's parish grounding. Why raffling non-assault guns at a church event was any worse than distributing them at hundreds of other so-called sanctioned venues must remain puzzling to planners of the sportsman's dinner. Voices once again talking past each other.

Passion about reforming gun policy lacks sufficient clarity. The church has within its collective mind much to sort through to reach for understanding beyond the instincts of the moment or the false distractions of culture. That would require a broad and difficult discussion. As things stand, fragmented and adrift, the possibility of a meaningful response to a frightening crisis seems far off.

*Correction: An earlier version of this story incorrectly stated the diocese of which St. Nicholas Parish is part. St. Nicholas is part of the Ukrainian Archeparchy of Philadelphia and not part of the Diocese of Allentown,

[Ken Briggs reported on religion for Newsday and The New York Times, has contributed articles to many publications, written four books and is an instructor at Lafayette College in Easton, Pennslyvania.]

Opinion | Catholic response to gun violence is contradictory and confused