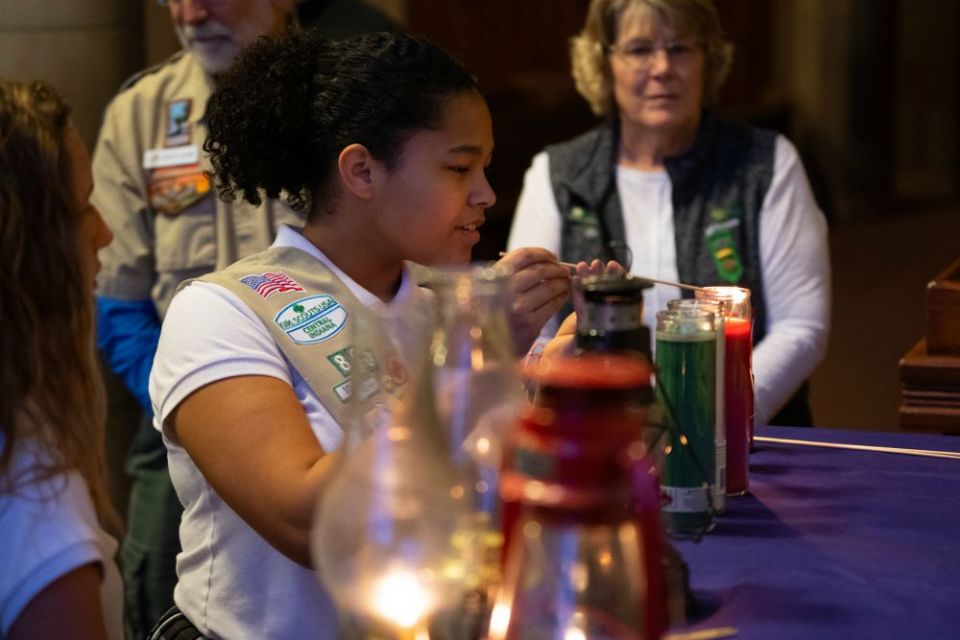 Mayanna Navarra, a student at Our Lady of Lourdes Catholic School in Indianapolis, lights a candle with the Peace Light, a flame kindled from the place where Christ was born in Bethlehem, West Bank, at Our Lady of Lourdes Church in Indianapolis Dec. 4. The fire was originally flown to New York City, then driven by volunteers to be distributed in more than 30 states. (CNS/Katie Rutter)

As we come to the end of another year, Fr. Tom Reese has provided a disturbing description of the state of affairs in our country and in the world. His vision seems remarkably accurate and comprehensive.

Reese notes, for example, that religion is seen by many as irrelevant today, and by others as a source of conflict. He reminds us of how and why Catholics have lost trust in their leaders. Politics, he judges, has lost its ability to deal with substantive issues such as climate change and injustice.

Reese goes on to describe political chaos: France, Britain, Hungary, the Philippines, and on and on.

At the heart of the problem appears to be a lack of care and concern for others. Elites have what they want and exhibit no interest in reaching out to assist others who are struggling to survive each day.

Reese even sees parallels to conditions that precipitated the build-up to World War II in the 1930s.

What is his solution to the current dismal picture? Religion. He recalls the words of Pope Paul VI, "If you want peace, work for justice." In the spirit of Advent, he calls on us to prepare the way of the Lord by strengthening and spreading more and more of the love of Father, Son and Spirit.

Let me share a few of my thoughts as we approach the Christmas celebration.

There is a danger that exhortations to religious fervor and practice will come across as hollow. Even Reese notes that religion is considered a part of the problem.

I tend to agree with G.K. Chesterton's idea that the problem with Christianity is not that it has been found wanting, but that it has never been tried. It is too easy to look at religious institutions and religious leaders today and see everything that is wrong with Christianity as we see it practiced. Also, of course, we need not even mention the frequent and inevitable failures of all of us as individual Christians.

Yet I cannot but be humbled by the idea of the incarnation. God became man. A god who loved us so much that he/she wanted to assume our nature in every way. God chose to become a part of our lives with all its joys, sorrows, successes and failures. With all the ugliness of humanity, and our inhumanity to each other, God chose to be associated with us.

In other words, God has not given up on us. We cannot afford to give up on ourselves. Our God, made known to us in Jesus the Christ, will certainly walk with us every step of the way. We are called as Pope Paul VI said to work for justice, to let our light shine in the darkness, and to take a stand against injustice in our world.

I believe 2019 can be a better year. Merry Christmas.

Opinion | Light a candle in the darkness

The gravity of discipleship